Cape Rose replaces an older boat that had provided search and rescue (SAR) assistance along the WA coastline for more than 20 years after having previously served with the WA Water Police.

The boat is built with an aluminium hull with a D-section collar. The collar consists of polyethylene foam that has been laser-cut to suit the gunnel shape, with a polymar outer and PVC rubbing strip.

The RIB was custom-built to suit NSCV requirements as well as the specific requirements of the WA Department of Fire and Emergency Services (DFES), which had also funded its construction as part of a wider state government investment in local marine rescue groups.

Based on a proven parent hull form used in large numbers by military and rescue organisations in South East Asia, Cape Rose boasts a design that features increased hull vee and a deeper, extended forefoot to provide enhanced seakeeping as required for operations in the Indian Ocean off the WA coast. Zipwake KB-450 interceptors are fitted to provide dynamic trim control. The craft is road-transportable and capable of being launched directly from the beach into the water, significantly reducing response times.

Dongara Managing Director Rohan Warr said that, being deeper and finer forward, the boat is less prone to bottom and chine slamming than would otherwise be the case. He also noted that the resultant longer deceleration also contributes to a smoother ride.

The builder has further claimed that Cape Rose is a high-volume boat and is thus noticeably larger than is typically associated with a RIB of eight metres’ length. The boat features an enclosed cabin with seating for three crewmembers including Shockwave suspension seats for the coxswain and navigator’s positions. The cabin sides extend well aft of these positions to provide shelter from the elements but also feature sliding Windows West windows to enable seated personnel to easily converse with people on other boats. Fold-down ladders are fitted on each side to provide ease of access to and from the water.

The cabin is open at the rear, enabling direct access to the work deck, which is sheltered by a solid canopy. A heavy-duty tow post is incorporated into the structure aft, where a bench seat is also fitted.

Accessed through a centreline passage through the wheelhouse console, the forward cabin is primarily arranged for storage but also includes a refrigerator. 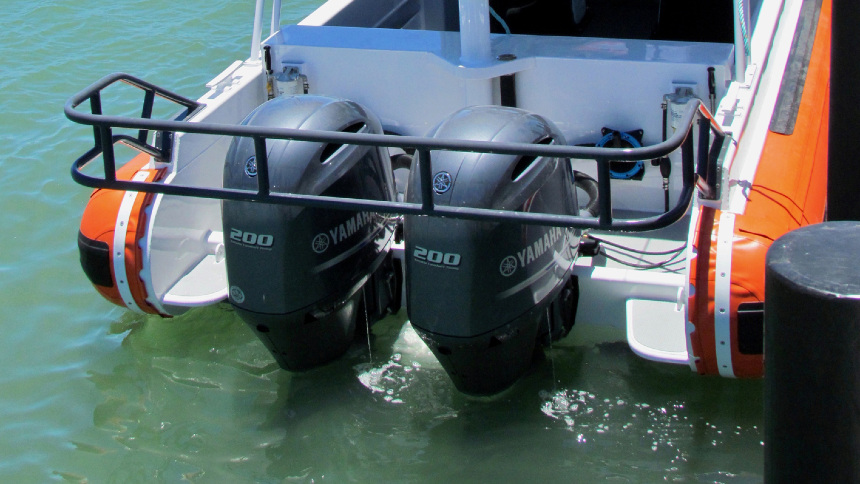 The boat is powered by twin Yamaha F200 outboards, which also feature “fly-by-wire” digital electronic control (DEC) throttles, digital instrumentation, and hydraulic steering. On trials, their combined output of 298 kW gave Cape Rose a top speed of 38 knots. However, a service speed of 25 knots will be part of the boat’s normal operating profile.

The boat requires very little steering input to maintain course. In addition, sailing at top speed will not subject the occupants to the unstable “flighty” feeling often experienced on other small craft.

The onboard lighting includes Ultra Vision LED deck/flood lights and a Sanshin searchlight.