As Baird Maritime reported in June, Dongara Marine has been selected by Western Australia’s Department of Fire and Emergency Services (DFES) to be on a panel of contractors for the supply of new “fit for purpose” rescue vessels and vessel refit services.

As part of this, the company is currently building a new 8.3-metre rescue craft (pictured above) for Marine Rescue Shark Bay, which is based in Denham, Western Australia.

Designed by Southerly Designs and due for completion before the end of the year, the aluminium RIB will have foam-filled collars and an enclosed cabin with three crew seats. The cabin is open at the rear, enabling direct access to the work deck, which is sheltered by a fixed canopy.

The boat will be powered by twin 149kW Yamaha outboards and fitted with a comprehensive suite of navigation and communications electronics including radar, chart plotter, and sounder as well as forward looking infra-red (FLIR) thermal and underwater cameras.

Refits in the pipeline

The DFES panel contract has also seen Dongara Marine secure a series of refits of similar vessels, with half-life refurbishments and repowers completed on two RIBs for Marine Rescue Shark Bay and a third just starting.

Repainting and other maintenance work has also just been completed on an 11.3-metre waterjet RIB which operates as a fisheries patrol boat for Western Australia’s Department of Primary Industries and Regional Development.

“We hope to be able to confirm a contract to build another new high speed boat for an emergency service role shortly,” he revealed.

Firefighting vessels was another area where Warr said there had been recent market interest.

“Working with Southerly Designs we have undertaken significant development on a couple of custom fireboat platforms in recent times,” he said. 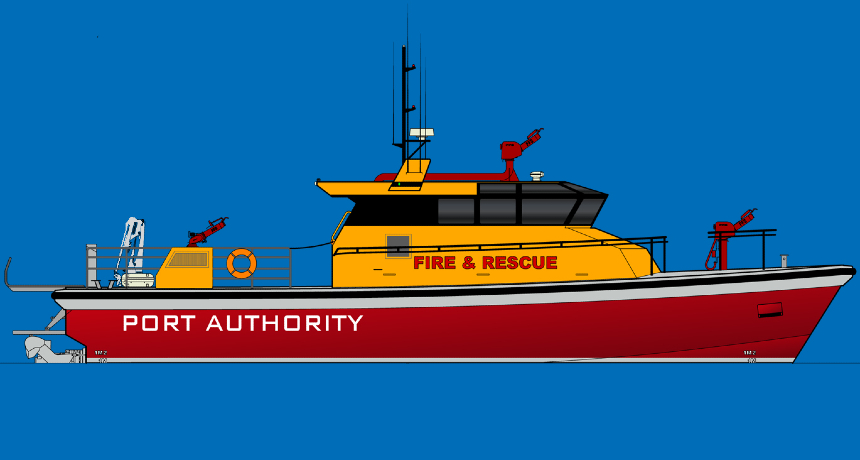 “One is a trailerable vessel but with a professional level firefighting capability including dedicated fire pump, choice of remote or manual monitors, and self-protection system.

“This is intended for both inshore and inland waters situations including fighting fires on boats at sea or in marinas as well as shore infrastructure and shore areas that may otherwise be inaccessible,” he explained.

For very high capacity firefighting, akin to that of high end dedicated fire boats, Dongara Marine has produced a solution based on its Berkeley Class pilot boat platform.

“The hullform has very well proven seakeeping, which means the design has the ability to fight fires on ships at sea and offshore installations. The design also provides the ability to transit to fires at high speed, even in heavy sea conditions, but also manoeuvre and hold station in shallow, restricted waters,” he added.