When a devastating bushfire hit the Australian town of Mallacoota on New Year’s Eve, local commercial marine operators and maritime agencies played a vital role in providing relief for those affected.

One of the enduring symbols of this year’s horror bushfire season was the sight of hundreds of people being evacuated from Mallacoota by HMAS Choules. The Australian Defence Force ship is specially designed for use in humanitarian crises but perhaps nobody expected it to be used for the task of rescuing Australians trapped by bushfire. In this role it provided a valuable lifeline to the East Gippsland town when land access was cut-off in the wake of the huge fire there.

While the Royal Australian Navy vessel was one of the more dramatic examples of the bushfire response, many government agencies and commercial vessel operators were involved in providing support where it was needed.

One of the first vessels to arrive at the town was the offshore supply vessel Far Saracen. Volunteer coastguards and marine rescue also provided support during the bushfire emergency.

Darryl Burns, a Divisional Commander for Forrest Fire Management Victoria who lives in Mallacoota, was part of the incident control team working to protect lives and properties as fire charged through the area.

“All those in Mallacoota were encouraged to leave and go north before the fire hit. The town has a permanent population of just over a thousand people and in peak season that extends to about ten thousand people,” he said.

“Residents and a number of visitors in the town heeded that advice until there came a point where the road had to be closed because it had become compromised by the fire. Those that hadn’t left before that point were in Mallacoota for the ride.”

Daryl described that particularly busy time for the incident response team, focused on fighting a fire and protecting life and property to the best of its ability.

“We were also coordinating the relief response with the Australian Defence Force to get people out and food in, while keeping the town watered, sewerage treatment plants working, keeping power and comms on and managing medical-related incidents.”

Darryl said that in an emergency like the fires, people will do what they can to help themselves and others, but he always encourages people to act safely and—even if he can see people are acting with the best intentions—he will strongly advise people against actions that will put lives at risk.

“I briefed the community and asked them to do particular things and stay away from certain areas. We had power lines down and trees on fire falling around the place,” he said.

Local commercial boat operators at Mallacoota were actively involved in helping the community in the face of the approaching fires.

Those that were unable to evacuate gathered on the lake foreshore and jetties, prepared if necessary, to shelter in the water.

Peter York who runs Buckland’s Jetty Boat Hire just out of Mallacoota moved several of his boats into the town and tied up at a jetty to provide shelter for dozens of people with nowhere else to go. As smoke filled the air and the sky turned dark red, the boats provided a temporary refuge and – if worse came to worse – a possible escape route. In the end everybody was able to sit out the fire at the jetty, which was fortunate given that several other boats that Peter had positioned out of harm’s way on the lake dragged their anchors and drifted off. Another got destroyed by the fire.

His house survived though and, even more remarkably, the historic wooden boathouse – home to the boat-hire business and one of the oldest buildings in the town.

“We were very lucky for that to survive,” he said. “As soon as we got the opportunity, we made our way back to the shed by water – we couldn’t get there by road – as there was still fire encroaching on it. We then spent a couple of hours bucketing water to put it out.”

In the immediate aftermath of the fire, many local fishermen, abalone divers and coastguards made their boats available for running supplies or helping to evacuate people. Abalone diver Jason York evacuated his family to Merimbula in New South Wales, but then returned via sea, bringing in a doctor and local tradespeople to help out with the relief effort.

“When a natural disaster like this happens, everyone does what they can,” said Jason. “It brings people together short-term and hopefully that’s maintained. We’re a pretty resilient community to start with.”

The local abalone processing plant was gutted by the fire but, even so, any equipment which survived was put to good use. With power cut off, the plant’s generator was used to run the town’s bakery, a forklift was used to unload supply vessels at the boat ramp, and the refrigerated trucks became a temporary cold storage room for bulk goods.

The fire destroyed about 150 homes in the town and the surrounding region. Afterwards the town was isolated with no power for several weeks and limited road access. Recovery will take months if not years, but Darryl said the fires could have been worse.

“There was significant risk with the fires that hit Mallacoota and the outcome could have been very different, but no one was hurt or worse. I’m really thankful about that. I’ve been determined all the way through – we’re not done yet, and we’ll be working for many months to come to make sure everyone goes home safe to their families every night,” he said.

In the short-term, locals are hopeful that the tourists will return and give a much-needed boost to the local economy. Plans are also underway to rebuild the abalone processing plant.

“We hope to have a complete new factory, and come out of this bigger and better and stronger than ever with added processes,” added Jason.

Teaming up with the community

A bushfire emergency call at 09:30 in the morning diverted Solstad Offshore vessel Far Saracen at full steam from moving and mooring a Bass Strait oilrig to help the Mallacoota community.

By the time Far Saracen arrived, its crew had only that day to mentally compose themselves and physically prepare the ships facilities. In the following days, they provided food, fire-fighting resources, medical help, moral support and some respite from the debilitating smoke.

“Through an extensive brief on the way to Mallacoota, we talked about how we would handle the trauma when we got there,” said Steve Young, Far Saracen’s master.

The 87-metre, 6,107-tonne vessel arrived at 17:00, the first commercial vessel to get to Mallacoota. Later the Royal Australian Navy would also anchor off the beach to provide passage for thousands of holidaymakers and some residents fleeing the town. With poor visibility caused by the fire, Far Saracen was unable to reach the shore, so the crew turned all ship lights on to notify people they were there.

After making contact with the Mallacoota township and doing a couple of runs with their fast rescue craft, a local charter fishing boat started coming alongside regularly. In the first delivery, the cook made 100 toasted sandwiches for crew members to take ashore. With cases of water and three 200-litre drums of diesel, they arrived on the wharf and started introducing themselves.

“We got the drums off and hand pumped them into containers to fill the fire trucks,” Steve said.

“We transferred fuel and food via the fishing vessel and others,” added Chief Officer Dave Phillipson. 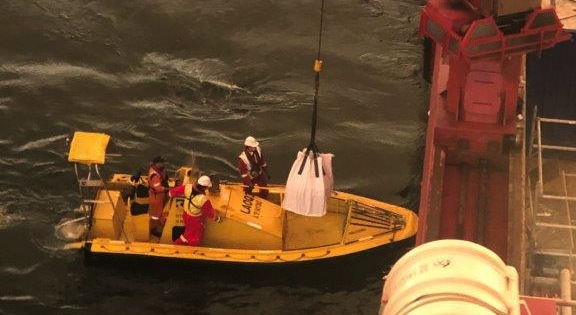 On January 4, a sister ship, Far Senator, arrived and transferred thirty Foodbank pallets to Far Saracen. Locals with fishing boats helped ferry the goods ashore where it was hand carried to the local hall for distribution to families. The smaller tenders also enabled two-way traffic to the ship’s makeshift hospital, where highest-risk evacuees, the elderly and the young, gained respite and the most vital commodity – clean air. Several paramedics came aboard to attend to the sick.

“On the busiest night, mattresses in the hallways and all over the place, accommodated fifty evacuees,” Steve said.

Crewmembers were most affected by seeing distressed children, including a baby girl who came aboard blue with asthma, but thanks to the ship’s capacity to recirculate clean air, she recovered within a few hours.

Well prepared by their vessel’s routine safety briefs and drills, their greatest challenge was managing the air conditioning to recirculate every eight to 12 hours to neutralise rising carbon dioxide. In a final community-spirited act before departing on January 6, the crew passed around the hat and delivered $1,900 to local wildlife rescuers, inundated with suffering animals.