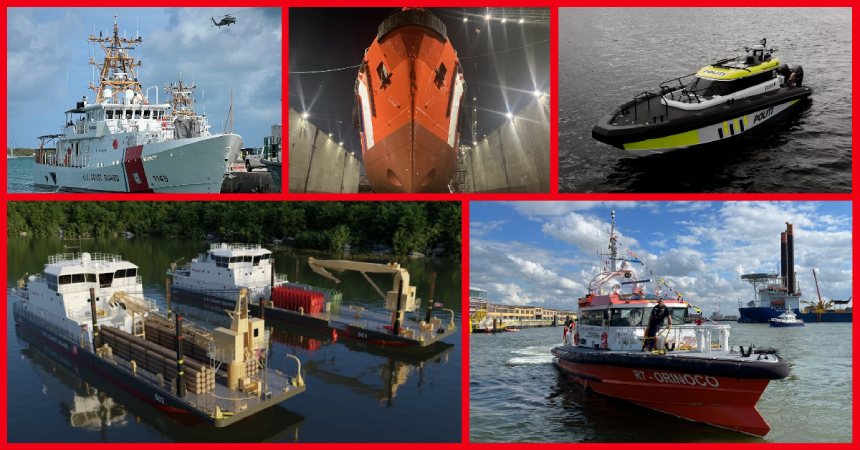 Deliveries include a rescue boat for Flemish waters and a police interceptor RIB for Norway’s coastal areas. Also, the US Coast Guard commissions its newest fast response cutter as upgrade works have been completed on a rescue and spill response vessel operating in Alaskan waters. Lastly, a recently awarded newbuilding contract calls for the design and construction of a new fleet of 27 cutters for use by the US Coast Guard in inland waterways.

Orinoco has an LOA of 20.5 metres, a beam of six metres, a draught of 1.1 metre, and two 551kW engines that deliver a speed of 25 knots. Onboard space is available for three crewmembers and up to 24 rescued survivors.

The RIB is the first unit in a new series of multi-purpose craft that will operate along the Norwegian coastline.

The 12-metre RIB is powered by two Mercury outboards and is fitted with a Raymarine radar.

The cutter is homeported in Ketchikan, Alaska, as an operational asset of the coast guard’s 17th District. Construction took place at Bollinger Shipyards in Louisiana.

Refit works have been completed on a rescue and spill response vessel operated by Fort Lauderdale-based salvage and emergency response company Resolve Marine.

The refit on the 207-foot (63-metre) Resolve Pioneer included various technical upgrades, renewal of the steel hull, and painting of the exterior surfaces.

The vessel will be re-deployed to its area of responsibility in Western Alaska. The upgrades will add at least five more years to its service life.

Birdon America has been awarded a US$1.187 billion contract to design and build 27 waterways commerce cutters (WCC) for the US Coast Guard.

The WCC contract is comprised of two separate but related vessel designs: the river buoy tender (WLR) and the inland construction tender (WLIC). Birdon expects the new cutter designs to provide up to 11 days of accommodation and habitability for 19 crewmembers.

The 27 vessels will be constructed within a 10-year period commencing with an 18-month design finalisation period.

Bollinger Shipyards will be a subcontractor of Birdon for the WCC program.