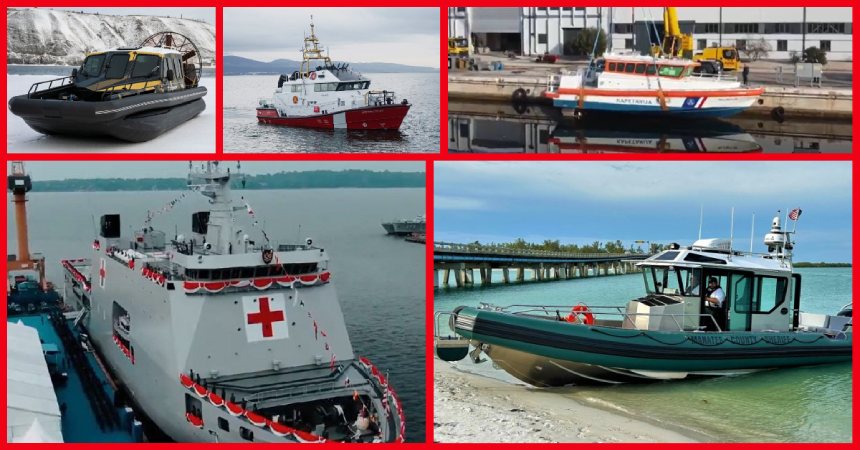 Recent deliveries include an Indonesian Navy hospital ship, two rescue boats for the Canadian Coast Guard, and response boats for the Russian government and a sheriff’s office in the US state of Florida. Construction is meanwhile nearly complete on a new self-righting boat for a Croatian government operator.

The Indonesian Navy has taken delivery of the second hospital ship in a series built by local state-owned shipbuilder PAL.

KRI Dr Radjiman Wedyodiningrat is a sister ship of KRI Dr Wahidin Sudirohusodo, which was delivered to the navy in early 2022.

Dr Radjiman Wedyodiningrat uses the same general hull design as that of the Indonesian Navy’s Makassar-class landing platform docks. Modifications to allow the ship to perform the floating hospital role include the removal of all armament and the incorporation of various facilities to accommodate a maximum of 242 patients, including 159 bedridden patients, in addition to the 120 crewmembers and 66 medical personnel.

CCGS Chedabucto Bay and CCGS Gabarus Bay were built by Chantier Naval Forillon in Gaspé, Quebec, and Hike Metal Products in Wheatley, Ontario. The vessels will be stationed in Clark’s Harbour, Nova Scotia and Burgeo, Newfoundland and Labrador.

The newbuilds are among the 20 new rescue boats named after geographical bays across Canada, hence their alternate designation of Bay-class. Design work was provided by local naval architecture firm Robert Allan Ltd.

The 33-foot (10-metre) RIB is designed for operation even during days of inclement weather.

Power is provided by three Mercury outboards while the array of equipment includes a Garmin radar and a rotating thermal camera.

Russian manufacturer Severboat has handed over a new airboat to the country’s State Small Vessels Inspectorate for use in emergency response missions out of the western city of Lipetsk.

The vessel has an LOA of 7.8 metres and capacity for eight passengers and 1,500 kilograms of cargo. Berths are also available for use by four people.

The airboat will be used for search and rescue (SAR) and maritime safety patrols even in waters covered with surface ice.

Iskra Shipyard in Croatia has launched a new high-speed search and rescue (SAR) boat being built for the country’s Emergency Maritime Medical Service.

The aluminium-hulled, 15-metre-long vessel will have self-righting ability and a maximum speed of 35 knots. Space will be available for three crewmembers and 11 passengers.

The new SAR boat is the first in a planned series of six ordered by the same operator.