Dutch technology start-up company Fleet Cleaner has begun operating a new vessel that is designed specifically for cleaning the hulls of other ships such as oil tankers.

The second vessel to be acquired by the company, Thunderbird 2 was also developed in-house by Fleet Cleaner. The innovative vessel has an LOA of 64 metres, a beam of 7.3 metres, and a draught of just under one metre. There are berths available for five crewmembers, though up to six additional personnel can be accommodated on board at any time.

“Thunderbird 2 is the first vessel in the world that was designed to clean the hulls of tankers even as they are loading and unloading liquid cargo while at berth,” Fleet Cleaner’s John Van Etten told Baird Maritime.

This is viewed as an important role, as fouling such as algae and barnacles on hulls will compel ships to consume more fuel over time just to cover the same distances, thereby generating more CO2 emissions, whereas a “clean” ship will yield 10 per cent savings on fuel costs and account for CO2 emissions reductions of as much as 5,000 tonnes per year.

The vessel’s cleaning equipment, which also include a crane and a remotely operated vehicle (ROV) specially developed by Fleet Cleaner, are all ATEX-certified. This indicates a significantly reduced risk of explosions as tanker hulls are being cleaned even while cargo operations are being conducted.

“The vessel’s smart cleaning system can navigate in zero visibility and can adjust its cleaning pressure depending on the type of fouling present, thus minimising the risk of damage to the hull. The ROV attaches to the hull via magnets and captures any waste water. This waste water gets filtered and is later released as clean water to ensure that the surrounding marine environment is not affected by the cleaning operation.”

In configuring the vessel’s interior layout to further ensure the crew’s safety, Fleet Cleaner followed guidelines that are also used in tanker design. Some of these guidelines are those that pertain to sensors that can detect gas in certain areas of the vessel and those relating to keeping atmospheric pressure in the accommodation spaces to acceptable levels.

“The biggest challenges in designing and building the vessel were in making sure that all the equipment on deck was ATEX-certified,” Van Etten told Baird Maritime. “We also had to make sure that everything is in line with the regulations in place as regards the cleaning of tanker hulls during cargo operations.”

Fortunately, Fleet Cleaner succeeded in meeting these objectives, and the ensuing work also brought about new insights that the company will apply in future hull-cleaning vessel design projects.

Thunderbird 2 began regular operations with Fleet Cleaner in July of this year following a construction period that spanned seven months. As with the company’s earlier vessel Thunderbird 1, the newbuild will be deployed to serve clients in some of the major ports in the Netherlands and Belgium. 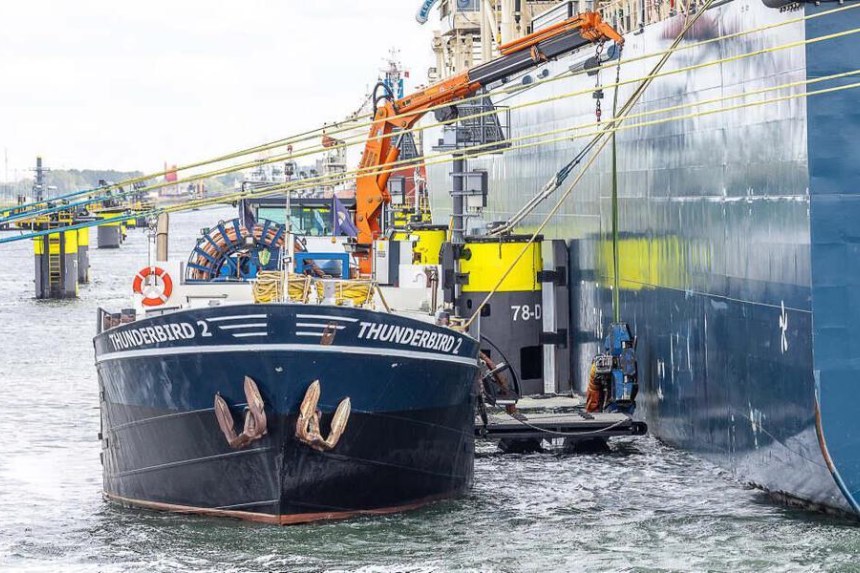