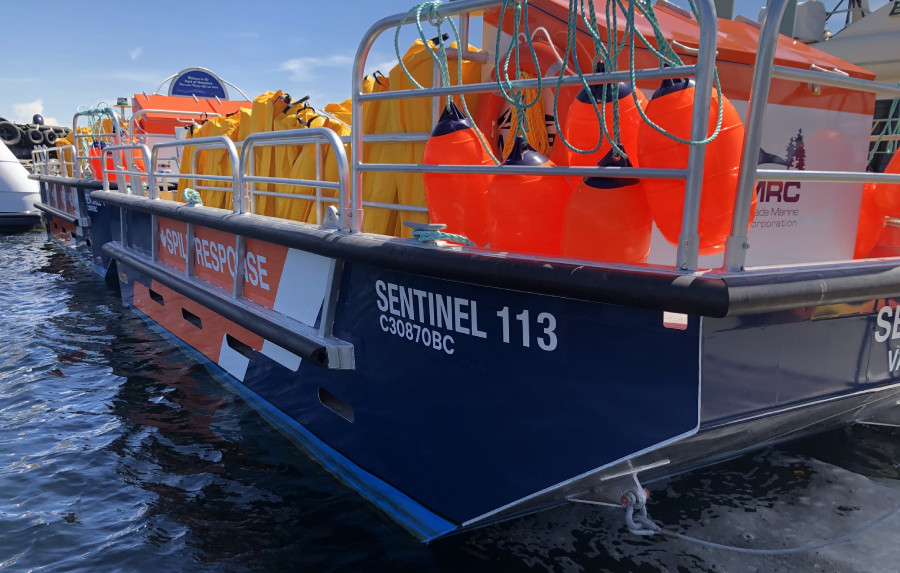 The newbuilds have been designated in WCMRC service as boom skiffs. Each is custom-built with an aluminium hull, a length of six metres, a beam of 2.7 metres, and a spacious cargo deck that can accommodate over 450 metres of oil spill response boom. The vessels are ideal for supporting oil spill recovery in and around docks but are also designed to be deployable in other types of coastal environments as well.

The new craft are non-self-propelled and were built to function as water trailers. They are capable of being towed at speeds of up to 20 knots by a first response vessel to transport boom and other assets to contain spill incidents wherever these occur within the operator’s areas of responsibility.

The use of these skiffs will enhance operational flexibility, as any powered vessel in the WCMRC fleet can tow these small boats to deploy boom anywhere along the BC coast. No modifications, temporary or otherwise, need to be made on WCMRC’s existing landing craft and other workboats to enable them to quickly transport boom and associated equipment when responding to spill incidents that require rapid response to prevent their further spread. They will instead simply hook up to these skiffs, each of which has significantly greater carrying capacity.

As with the earlier boom skiffs being operated by WCMRC, the newer vessels are versatile enough that they may also be used for the transport of any recovered waste from spill sites to the nearest response base.

The first two boom skiffs in the series, Sentinel 106 and Sentinel 107, were transported from Allied Shipbuilders to WCMRC’s Nanaimo Response Base in February of this year. At the beginning of June, all 10 vessels in the order were handed over to the WCMRC Nanaimo Operations team for commissioning. Sea trials are being conducted to make observations and recommendations before the skiffs can be fully integrated into the fleet.

WCMRC said that the new boom skiffs are part of the spill response enhancements that are required for the expansion of the Trans Mountain Pipeline, which has been transporting both crude and refined oil from Alberta to the BC coast since the early 1950s. The company will be adding a total of 44 new vessels – including various workboats and barges – and six new response bases to provide an adequate standby spill response capability in support of this highly important pipeline.