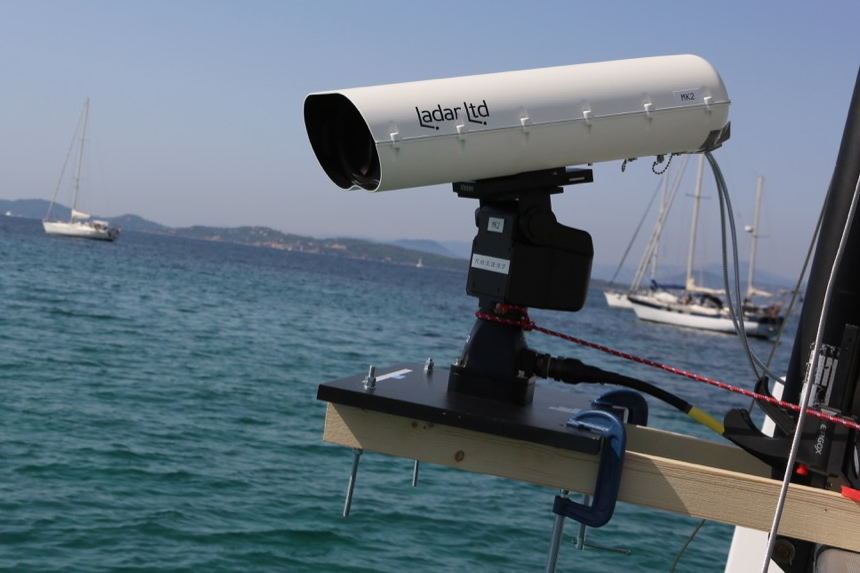 Anglo-Norwegian company Ladar has developed a compact laser detection and ranging system that can enhance the plastic detection capabilities of end users involved in various fields ranging from environmental research and monitoring to marine cleanup campaigns and harvesting plastic for recycling.

Huge amounts of plastic waste get dumped into the oceans every year, despoiling not only coastlines but triggering the agglomeration of vast islands of trash driven by the ocean currents. Estimates vary between eight and 15 million tonnes annually, or about one lorry load every minute, according to DNV expert Arnstein Eknes.

Lakes and rivers are likewise afflicted by an invasion of plastic that is eventually washed downstream to pollute estuaries and wetlands.

It is estimated that plastic ingestion is responsible for the death of one million marine animals every year. This is especially true for sea birds. One study showed that 80 per cent of the stomach contents of the species under investigation was plastic, which they had collected at sea and were feeding to their chicks.

What is even more damaging to the marine ecosystem is the plastic pollution that is invisible to the naked eye. Microplastics and even tinier nanoplastics originate from a host of mundane products like clothes and cosmetics, while secondary particles result from the degradation of larger objects over time. Particles sink through the water column to contaminate sediments while the presence of microplastics in fish and shellfish is a growing health concern in terms of human consumption.

Microplastic pollution is now evident even in the depths of the Mariana trench, Eknes said.

Environmental technologies have a big role to play in combating this huge global problem, not only in mapping and studying its effects, but also in pollution mitigation. One such example is Ladar’s microspectral detection system, which was developed over the last few years with early support from the EU’s Horizon 2020 fund.

The system uses a laser beam pulse to provide reliable and long-range plastic detection with high-speed operation and no latency. Highly accurate measurement provides a full 3D perspective of the scanned area or target in real time. Its laser bandwidth configuration can be adapted to different light wavelengths depending on requirements.

“In normal operating situations the system can detect objects in the surface layer at a range of a few metres up to a nautical mile distant,” said Ladar founder Sverre Dokken.

This allows for the creation of an effective surveillance zone around a platform where plastic objects can be detected, characterised, classified and tracked. Relevant observational data is processed using AI algorithms and displayed in real time via an intuitive graphical user interface (GUI).

Dokken added that the system was designed to be as user-friendly as possible so that it can be easily integrated into existing instrument decks or used as a standalone tool.

The system’s current set-up allows for a huge variety of applications related to plastic detection such as real-time 24/7 monitoring of specific areas such as rivers and coasts, harbours and ports, volume measurement also in different sea states, flow patterns and other essential research data. The system also enables plastic detection for targeted clean-up and catchment interventions by either manned or autonomous craft.

The system can accurately and precisely detect different sizes of plastic and display this data to enhance user performance, while also providing key information both prior to and after clean-up operations. Its 24/7 monitoring capability enables examination of plastic debris flow and breakdown cycle that can be inferred and used in modelling.

“This information can subsequently assist in planning and management of cleanup activities, identifying main sources of plastic debris and optimum siting of catchment structures,” said Dokken.

With appropriate bandwidth reconfiguration, the system also has potential to detect and track micro- and nanoplastics in support of future environmental regulation of waste management and industry. It could also be used to protect fish farms in coastal areas sensitive to plastic pollution transported downstream by rivers following storms.

Eknes said any kind of precision sensor technology can be extremely helpful in mapping plastic density and source tracing, and as part of investigations into pollution peaks and seasonal variations, especially in rivers.

A versatile and portable tool

Thanks to its compact size and low weight, the detecting equipment can be mounted on virtually any platform, while its modular assembly allows for rapid redeployment and easy maintenance.

Dokken said drone platforms are also going to be increasingly important in the next phases of development as the company matches up even lighter versions for plastic detection especially along rivers and shallow coasts in pristine areas that are hard to access.