Joining the workboat fleet of Russian port operator Rosmorport is Viktor Vorotylo, a new general service launch that is designed to take on a broad range of tasks even in the low temperatures and inclement weather conditions that are typical in the country’s far east.

Classed by the Russian Maritime Register of Shipping and designed by Saint Petersburg-based naval architecture firm Marine Technics, Viktor Vorotylo is the second in a series of two ice-capable multi-purpose vessels that have been built for Rosmorport by local shipyard Onego. The newbuild is designed to perform a diverse array of duties that include pilotage, ship escort, pollution monitoring, surveys of waterways, limited cargo transport, and even search and rescue (SAR) in environments with air temperatures of as low as -20 degrees Celsius and water temperatures of as low as -2 degrees Celsius. This unique capability ensures that the vessel and its sister will be available for year-round use in ice-free waters, though operations in frigid non-Arctic seas are still possible during the Far Eastern Russian summer which typically lasts from early June to late August.

Viktor Vorotylo has an LOA of 25.5 metres, a moulded beam of 6.6 metres, a draught of 1.8 metres, a displacement of 88 tonnes, space for two crew and 10 other personnel, an endurance of five days, and the ability to transport up to 500 kilograms of cargo. The vessel’s prominent HVAC-equipped wheelhouse offers ideal all-round visibility and is fitted with heated windows that prevent fogging.

There is also adequate space in the wheelhouse to accommodate pilots and their belongings in addition to the vessel’s own crew of two. Rosmorport claims that such an arrangement is beneficial as it would allow the crew to coordinate directly with pilots and more easily discuss boardings as opposed to having the pilots in a separate cabin and resorting only to radio communications while in transit.

Like its identical sister Anatoliy Klimov, Viktor Vorotylo is a Project ST23WIM-H vessel, a variant of the six-vessel Project ST23WIM series which was also designed and built specifically for Rosmorport. However, whereas standard Project ST23WIM vessels are powered only by a pair of 412kW diesel engines, the Project ST23WIM-H workboats each have a diesel-electric propulsion system developed by Italy-based marine transmission specialist Transfluid. Thus, the two newbuilds are among the first purpose-designed, hybrid-powered commercial workboats to be built in Russia (as indicated by the “H” designation).

The decision to install hybrid diesel-electric propulsion on the newer workboats was made after Rosmorport had requested features that would guarantee longer service lives for both vessels even as they endure regular heavy use of up to 16 hours each day. In particular, the electric motors would allow the vessels to operate economically at low speeds, thereby saving diesel fuel and the main engines for more demanding duties that require significantly greater power. The option to operate on battery power would also guarantee a minimal adverse impact on the environment, which is especially important as the Project ST23WIM-H workboats are expected to carry out marine pollution monitoring as one of their many functions.

Both Viktor Vorotylo and Anatoliy Klimov are designed to sail for up to seven knots on electric power supplied by a 288V battery pack. However, a cruising speed of 12 knots and a range of 500 nautical miles could be attained when the two MAN V6 447kW main diesel engines are engaged. The vessels also feature a “boost” mode that could provide additional forward thrust by using the two diesel engines and the two 75kW electric motors simultaneously. The engine room is adequately ventilated to help maintain ideal operating temperatures even as outside air temperatures reach 35 degrees Celsius.

The vessel has also been equipped with an 11kW bow thruster to enable precise manoeuvring during mooring operations.

Viktor Vorotylo and Anatoliy Klimov were handed over to Rosmorport in July of this year and are now operating out of the Port of Vanino in the far east region of Khabarovsk Krai. 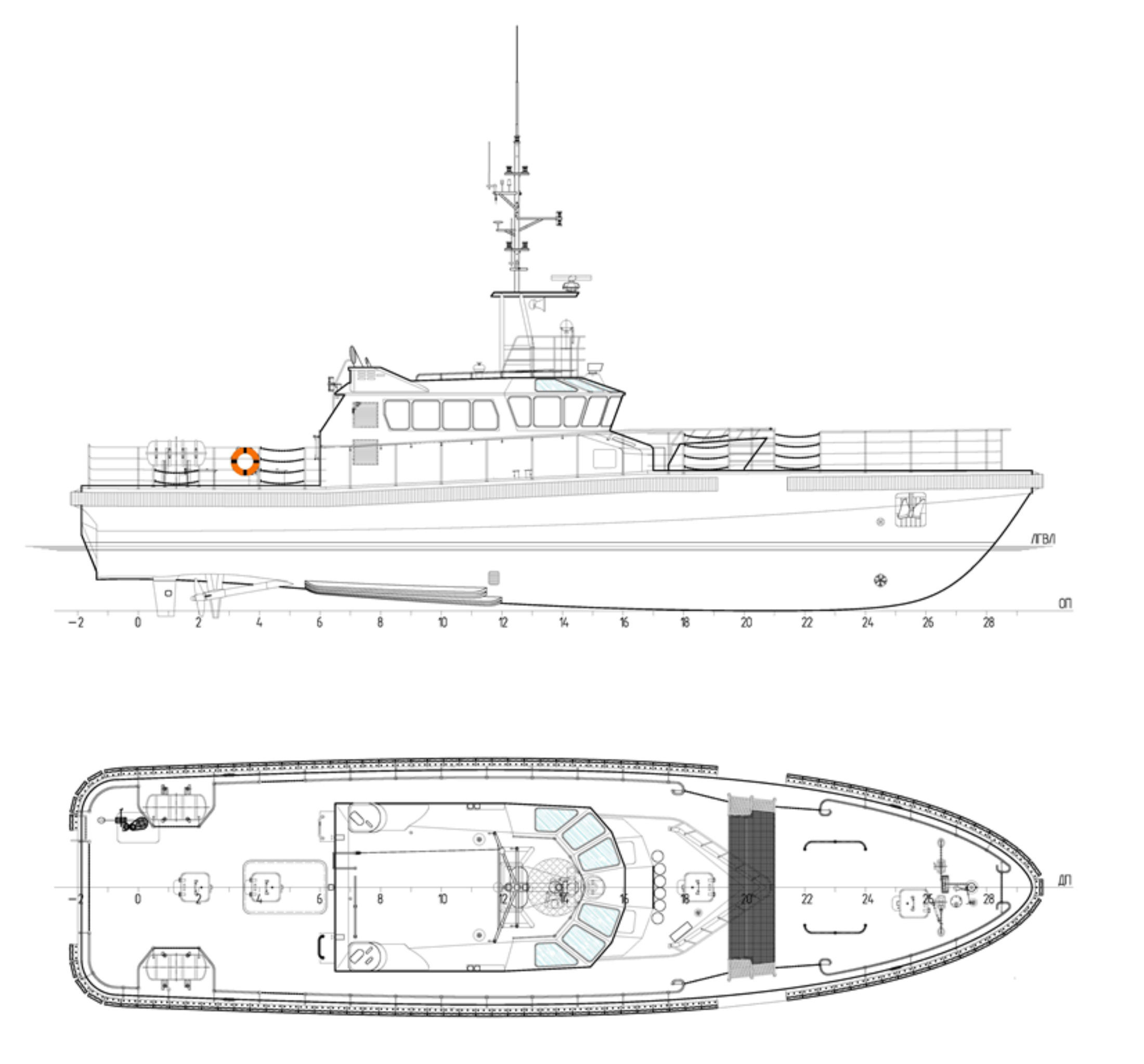