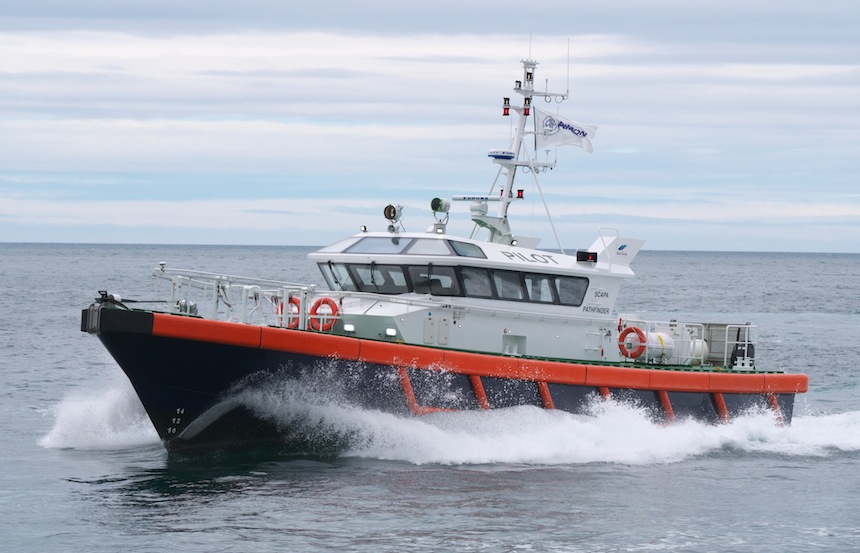 The vessel build contract was awarded to Armon Shipyard in the summer of 2018 after a full EU procurement process. Armon worked with Macduff Ship Design through this tender process and continued the partnership through the design and build phase, with design approval being conducted by SCMS to UK Workboat Code Area Category 3, for up to 20 miles from safe haven.

Following the contract award the vessel went through a final design evaluation with the help of propulsion and resistance specialists Wolfson Unit to evaluate expected vessel performance. According to Macduff Ship Design, this was critical as the vessel needed to match the capabilities of the existing council-owned vessels whilst also carrying additional fuel and meeting strict emissions regulations specified by the owner.

After final evaluation and the production and approval of the detailed design drawings the first aluminium was cut and vessel build commenced in late Autumn 2018. During the entire build process the vessel was supervised by Orcades Marine Management, Kirkwall, Orkney on behalf of the owners. Scapa Pathfinder is constructed entirely from aluminium to a hard-chine hullform. 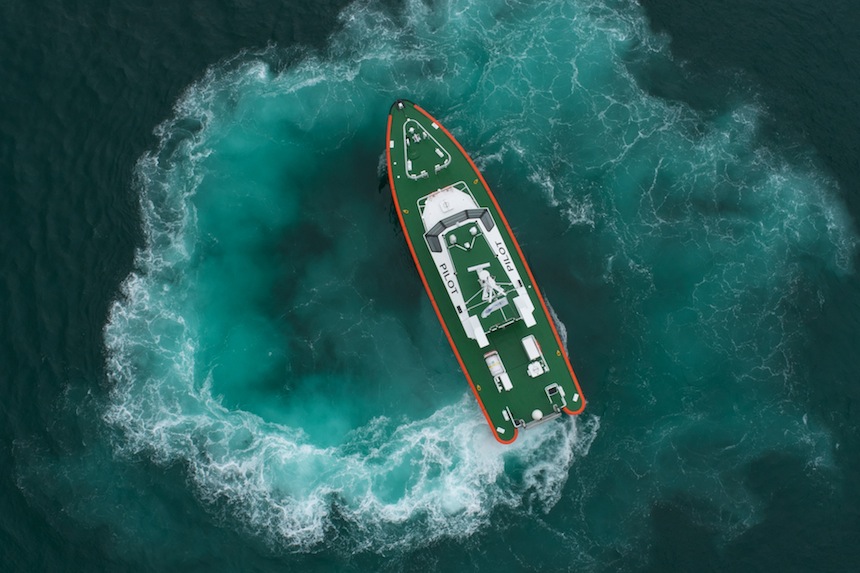 The final touches were completed on the vessel in August 2019 with final owner’s trials conducted in late August. At trials the vessel comfortably met all of the owner’s strict requirements including both achieving 21 knots at 100 per cent MCR and full load and stringent noise limits throughout. Following trials the vessel left Armon on its delivery voyage from Northern Spain to Orkney, with the vessel arriving at her homeport in early September.

The design specification for a vessel capable of pilot duties and occasional hydrographic survey work was inspired by the existing council vessel John Rae. The new vessel was also specified with the addition of a bow thruster, full IMO Tier III, SCR exhaust system to reduce exhaust emissions, an increased fuel capacity for additional range and the fitting of a fully battery powered electrical system instead of an electrical generator set. 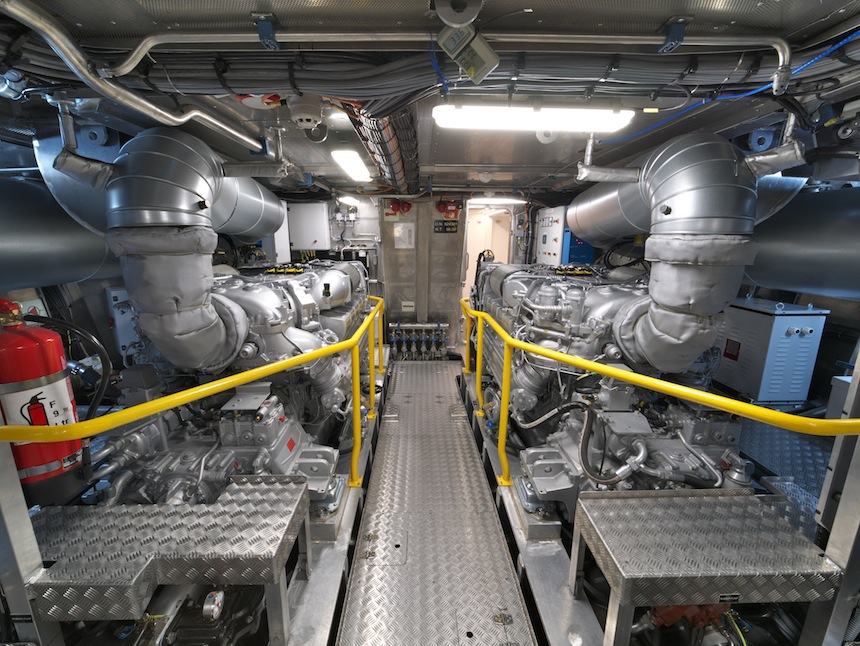 Scapa Pathfinder is fitted with twin MTU 10V 2000 M72 marine engines developing 900 kW. The engines and selective catalytic reduction (SCR) system make a package that is IMO Tier III compliant and is coupled to a dry silencer, a challenging requirement for a vessel of this size and power. The main engines are coupled to Twin Disc MGX 6620-A gearboxes driving twin 1,000mm diameter Teignbridge fixed pitch propellers. 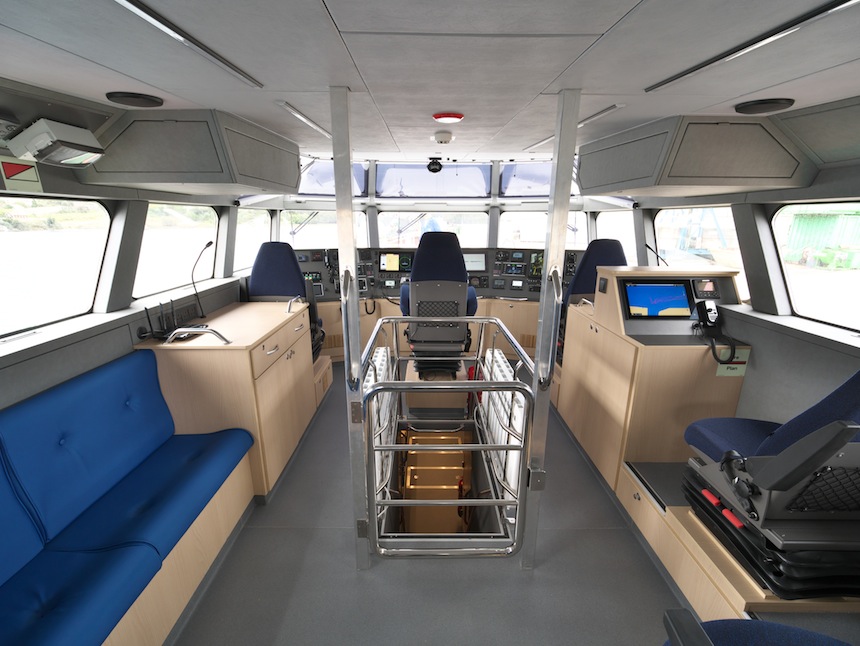 Above deck the vessel’s wheelhouse has seating for three pilots, three crew and a small lounge area. Around the wheelhouse is fitted a full Hadrian Rail for crew safety. Aft of the wheelhouse is a safe area for pilots including an external vessel control station and Goodchild Marine MOB recovery platform. 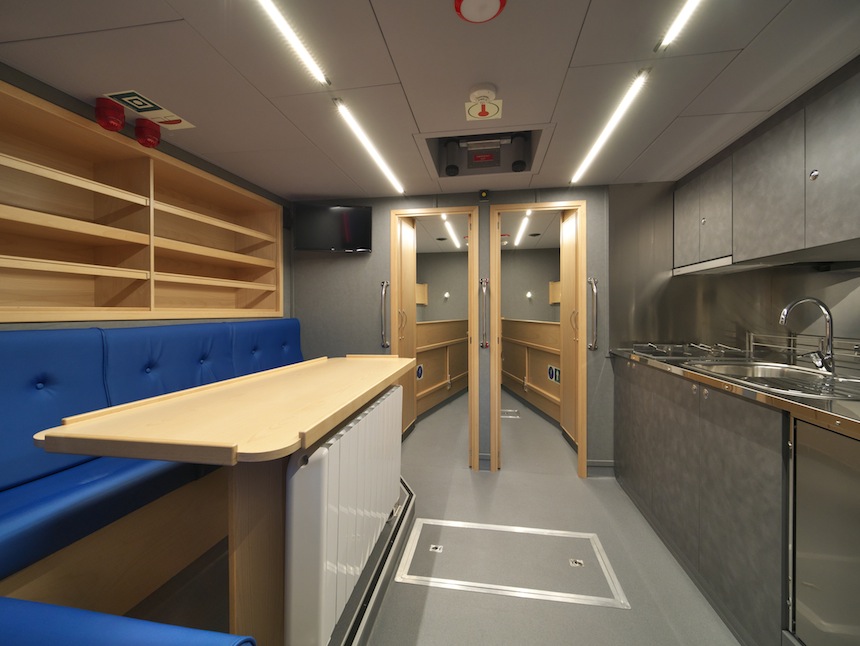 Forward on the main deck is a flush hatch to the fore peak and anchor windlass. Below deck the vessel has an aft peak space with steering gear, engine room, accommodation and fore peak/chain locker. At the aft end of the accommodation is a toilet WC with shower to port and a store room/engine room access space to starboard. Forward of this is a galley mess area with seating for four, and forward again are a pair of two-man cabins.