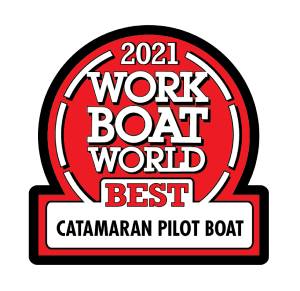 Designed in Vancouver and built nearby across the border in Port Townsend, this impressive pilot boat is certainly different. It is also very efficient and safe, was comparatively inexpensive to build, and is economical to operate.

A 40-knot, outboard-powered, aluminium, foil supported catamaran must be a first in the marine pilotage sector, but it obviously works and works well. Full marks for innovation.

“Ybor evolved from the experience of a major pilotage group following an analysis of their business activities and a fresh look on what they needed to improve,” Scott Jutson of Jutson Marine Design (JMD) told Baird Maritime. “The need for safety and sea keeping has always been the foundation of pilot boat design but to this, they wanted to add a level of nimbleness and performance so that more could be achieved in a given time period. Fuel costs were also an issue as that is a major overhead.”

“The boat is extremely fuel efficient,” added ACI Boats. “It has incredible low wake wash, and it’s fast with top speeds of 40 knots. It was designed and built for the Tampa Bay Pilots Association to be used as a support vessel, traveling through the Tampa Bay inner harbours. It’s a small vessel at 32 feet (9.75 metres) but delivers on all fronts.”

ACI remarked that the biggest challenge in building Ybor was setting up the foil with variable load conditions. Hence, the builder learned the combination of interceptor style trim tabs and trimmable outboard engines provided the adjustability that was needed.

“The main thing that evolved post launch,” said Jutson, “was that the boat was being used more than expected and for a wider range of duties. This is partially because it was simply less hassle and more fun as well as significantly more economical to run.”

Economical operation was a welcome benefit of the design in light of ACI’s having identified price increases in materials as one major obstacle currently impacting shipbuilding. Despite this, there is, “a steep incline in business.”

For JMD, the impact in the naval architecture has more to do with the integration of new power systems and the concern amongst regulatory agencies with regard to lithium-ion battery fires.

“We are also seeing a significant rise in the area of foils from foil-assisted to full foiling,” the designer added. “This always requires some pencil sharpening.”

JMD viewed 2021 as an “exceptional year” characterised by a rising demand for better solutions to sea keeping, wake wash, and fuel economy amidst lingering supply issues. As regards solutions, foil assist is seen as, “a simple bridge to achieving better outcomes,” while not requiring specialist operator training or attracting extra build costs.

“Business has been busier than ever, and strong across all market sectors,” ACI told Baird Maritime when asked about its performance in the previous year. “Recreational boating has seen the largest growth over the last two years in the markets we target, and we expect it to continue to increase.”

The builder added that the next few years will also bring additional work following the award of a US$3 million contract for four commercial fishing vessels for operators in American Samoa.

Commenting on the future of the pilotage industry, ACI expects to see smaller, more fuel efficient vessels to address the issue of price increases.

“Catamarans offer stable work platforms that lend themselves well to pilot work, so we expect to see a rise in the demand for aluminium catamarans.”

The builder explained further that catamarans will find greater use across all segments of the US workboat industry due to their operating efficiency, stability, and comfort. Trends that will help in this regard include foil assist, advances in outboard technology, and electric outboards.

“As per the thinking behind Ybor,” added JMD, “pilot groups are continuing to reimagine their business. This will have the usual teething pains as the generational perspectives come up against each other but there is no doubt that efficiency and nimbleness will be the watchwords of the future.”

The designer added that, as far as Canada’s workboat industry is concerned, the biggest change will occur in the 12 metres and under area as Transport Canada releases its new manning regulations.

“This will allow the crew transport/water taxi/tourism side of things to be completely re-imagined with larger non-tonnage regulated vessels,” Jutson told Baird Maritime. “We have an enormous ageing fleet overdue for replacement so once the rules are formally released, we will see a lot of activity. Permutations of the Ybor platform will become ubiquitous as a result as there is no better solution for the full spectrum of operational requirements.”