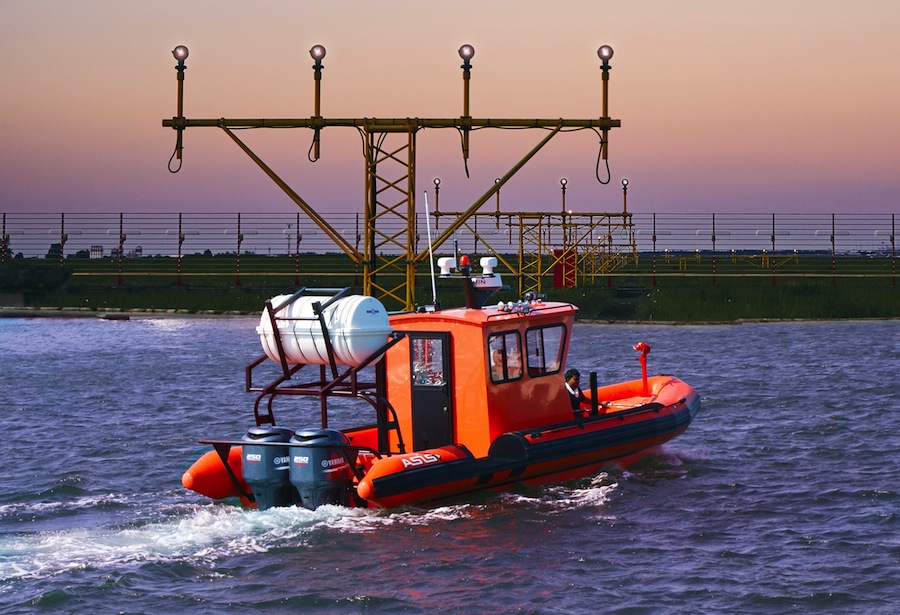 ASIS Boats has built-to-order and delivered a 9.5-metre airport rescue cabin RHIB to a civil aviation authority in Africa. This boat is versatile in its operation as it also has the ability to perform as a fire fighting boat if necessary, with the fire-fighting pump located at the bow of the boat.

The RHIB will be operated mainly for fast water rescues, rapid response purposes and other emergencies that might occur around airports located close to bodies of water. Its main duty is to be able to quickly respond to calls for assistance within the emergency zone and for fire fighting purposes, in harbours, shallow waters or open seas.

ASIS took the time to understand the client’s operational requirements and translated it into building a customised rigid hull inflatable boat that allows the client to have a unique rescue RIB with excellent performance, reliability and manoeuvrability.

“The biggest challenge is always meeting and exceeding all of our customer requirements within a very tight budget,” ASIS Boats told Baird Maritime. “Moreover, the customer was keen on having a multipurpose boat that excelled in every mission profile which of course is very challenging.”

ASIS also noted that having limited space on deck was a challenge, as the company had to fit a cabin, a fire pump, a stretcher as well as a large size raft that could easily be deployed.

Due to limited deck real estate, an inboard jet version of this craft was not possible and ASIS therefore went for a twin Yamaha 250 hp (185 kW) outboard installation. Local service centres in the area where the boat was going to be operated drove the choice of engine. An interesting addition to local conditions was the installation of covers with fly screens on the engines in order to protect them from flies and mosquitos.

“We would have rather opted for a diesel-powered engine (now available in outboard version) but the weight was too much for this vessel, which already had the life raft mounted on top of the engines,” added ASIS.

The twin outboards allow for a speed of 45 knots, with quick response time being extremely important for this application as every second can be the difference between a life saved and a life lost.

The hull and deck were built with a fire retardant resign infused fibreglass hull and a heavy-duty, foam-filled Hypalon tube fitted with rescue notches on both port and starboard sides for ease of rescue. The tube has extra reinforcement, with triple rubbing fenders, internal and external lifelines, and is covered by non-skid patches. The rescue notches on the tube facilitate the easy deployment and recovery of divers and injured persons from the water even while on a stretcher or spineboard.

The boat is equipped with a Godiva Power Flow GP12/10 fire-fighting pump of continuous rated performance of 1,325 litres per minute at 10-bar pressure. The monitor rotates 360 degrees and has a vertical movement of +90 to 45 degrees horizontal.

The 37-person life raft is mounted on top of the outboard engines on a stainless steel A-frame with ladder and platform, and has a special mechanism that allows it to be dropped in the water even with only one person operating the vessel.

The cabin, which is temperature controlled, has suspension seats for the comfort and safety of the operators, and all the operators are connected via wireless noise cancelling headsets enabling the crew to communicate wherever they are on the boat. The fire pump can be extremely loud in operation so it was very important for the operator to be in contact with the captain and team at all times.