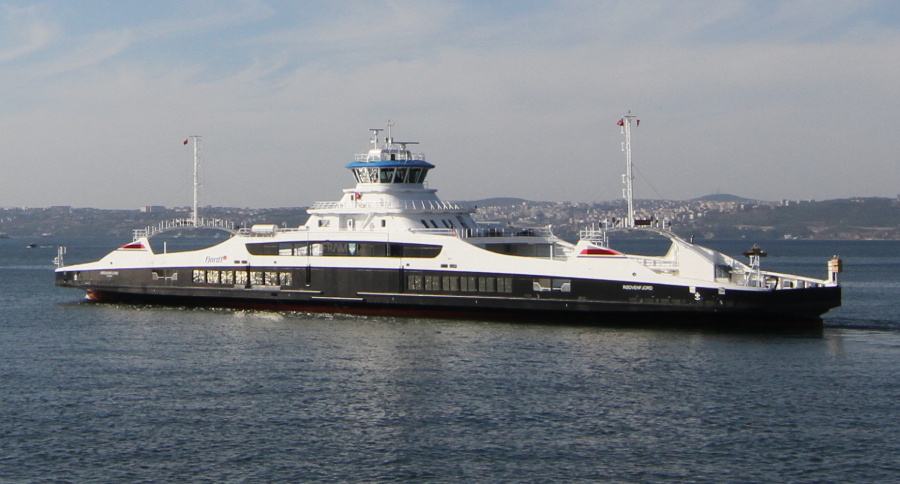 Rødvenfjord is the third ferry in a series and the seventh fully electric ferry overall to be built by Tersan for Fjord1. The vessel was designed by Norwegian naval architects Multi Maritime in compliance to DNV class rules.

The new ferry has a displacement of 2,800 tonnes, a length of 107.47 metres, a beam of 17.7 metres, and capacity for up to 750 tonnes of vehicles, typically 120 cars and 12 trailers. Its area of operations will be between the cities of Solsnes and Afarnes in Western Norway.

Rødvenfjord is a near identical sister of Eresfjørd and Samlafjørd, which Tersan delivered to Fjord1 in 2019 and are also currently serving the company’s Solsnes-Afarnes route. However, both Samlafjørd and Rødvenfjord‘s total passenger and crew capacities have each been slightly reduced to 299 compared to 343 for series lead vessel Eresfjørd despite all three vessels having the same general overall dimensions.

Tersan said the new ferry can operate on fully electric, hybrid, or diesel-electric mode. It is equipped with two Siemens batteries with an output of 772 kWh each as well as fast charging capability. Charging of the batteries can be done safely in as little as 10 minutes and even as passengers and vehicles are being loaded or offloaded.

A pair of Scania DI16 90M generator sets are also available to provide backup power in the event that the batteries become inoperative and to provide propulsive power for the ferry when sailing on diesel-electric mode.

Kongsberg Maritime AZP 085 CP-F azimuth thrusters that house controllable-pitch propellers have been installed to function as the ferry’s main propulsion units. The thrusters are versatile enough that they may also be used in berthing/unberthing and other instances that require the ferry to execute tighter manoeuvres.

An autonomous navigation system will enable the vessel to sail on the most optimum route during regular operations to minimise fuel consumption and emissions.

The work on the interior spaces was provided by Maritime Montering while Vestnes supplied the furniture. A complete communications package from Zenitel Norway includes radiotelephones, handheld units, and an onboard PA/intercom system. In addition to supplying the battery packs, Siemens also provided the switchboards and the ferry’s other electronics.

The ferry’s deck equipment consists of Adria Winch mooring winches and anchors and chains from Jingjiang Asian Star Import and Export. In the event of an emergency, the crew has access to a Survitec package that includes lifeboats, fire extinguishers, and other rescue equipment.