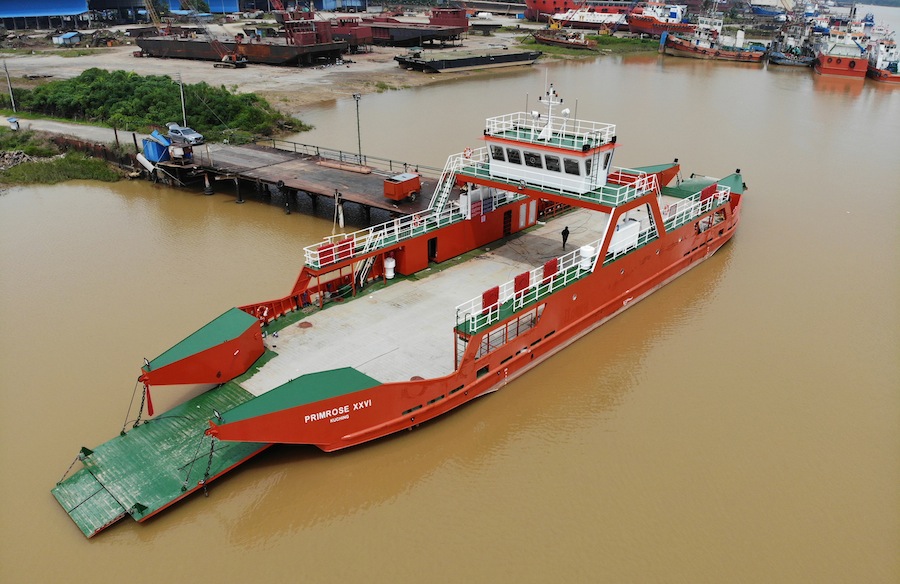 So many cities are built on rivers for obvious reasons of transport up and down, but also as ports for foreign trade.

But not all of a port city’s trade is up and down the river. People and vehicles must also cross the river. Bridges are great and most cities have one or more, but they are expensive and they lack flexibility.

In the city of Kuching, in Sarawak in Malysian Borneo, this cross-river traffic created the niche for a ferry. Located on the broad, flat, estuary lands of the Sarawak River, the city’s single bridge is some kilometres up from the sea.

To meet the need for more river crossings, the company Regal Ocean has had a fine new double ended car ferry built at the Kaibuok Shipyard in Sibu, Sarawak.

With two more ferries on order, the new boat begins a significant expansion for the firm. Designed by Waterline Tech of Kuching, the 42.7-metre-long ferry has both fore and aft hydraulic ramp doors that give a total overall length, with ramps, of 59.7 metres.

The single lane loading ramps open to a broad deck with a capacity of about 38 average size cars or light trucks. Larger vehicles can also be carried. Shelter for walk-on passengers is provided in a side cabin for a total moulded beam of 12.8 metres.

An elevated structure carries the full-visibility bridge that facilitates the ferry’s travel in either direction to negate the need to turn when landing.

Each engine turns a 101mm-diameter shaft with a length of 4,565mm mounted on Hangzhou T300 gears with 6.032:1 reduction. This fore and aft propulsion system gives the 1.7-metre-draught ferry an operating speed of ten knots.

The ferry will operate with a five-person crew for the five-kilometre crossing. A Cummins 4BTA3.9 G-powered 40 kW generator will provide auxiliary electrical power. This is the first of a three-ferry order. The other two boats will be similar but the owners have opted for the use of jet pumps rather than conventional propellers.