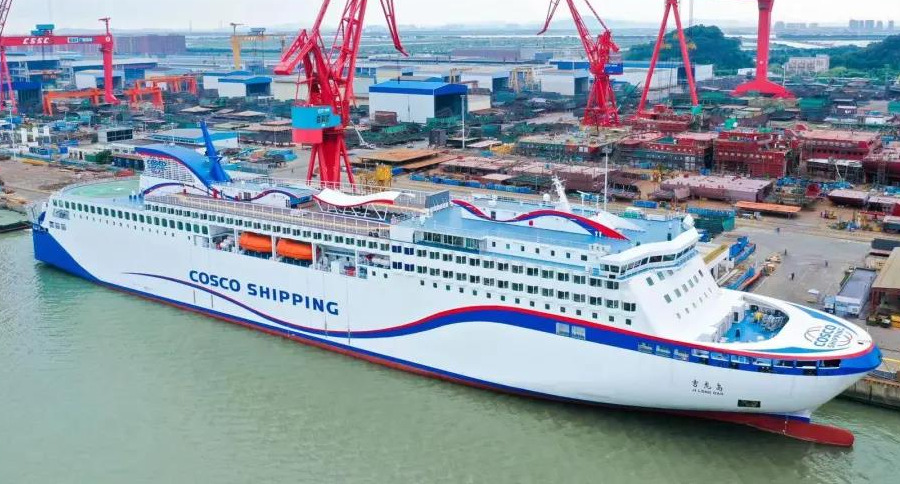 A newly built luxury Ro-Pax ferry has begun regular sailings on Bohai Bay between the cities of Dalian and Yantai on the east coast of mainland China, offering an alternative mode of transit with a travel time six hours shorter compared to overland routes.

Designed by Shanghai Merchant Ship Design and Research Institute (SDARI) and built by Guangzhou Shipyard International (GSI) to China Classification Society (CCS) and SOLAS “safe return to port” rules, Jilong Dao (“Jilong Island”) will be operated by local shipping line COSCO Shipping Passenger Transport. It has a length of 208 metres, a beam of 28.6 metres, a maximum draught of 6.7 metres, a gross tonnage of 43,195, and capacity for 1,300 passengers and 500 vehicles of five metres’ length each across a total of 2,800 lane metres.

The dimensions make Jilong Dao the largest passenger vessel ever to be acquired by COSCO Shipping as well as the second largest ferry currently in operation in Bohai Bay.

Even with its noticeably large size, the new ferry can still sail at a maximum speed of 22.3 knots, making it one of the fastest Ro-Pax vessels being operated domestically in China. Recent sailings have shown that it is also capable of cruising at just above 20 knots. The main engine drives a controllable-pitch propeller, which GSI opted to incorporate to provide the vessel with the right amount of propulsive power under a broad range of sailing conditions and thus keep emission levels as low as possible.

The selection of onboard amenities includes VIP lounges, al fresco restaurants, tea bars, cinemas, and children’s play areas. All interior spaces have been furnished to satisfy the Level 2 standard of the IMO’s Rules for Noise Levels on Ships, which means noise and vibration are significantly reduced. 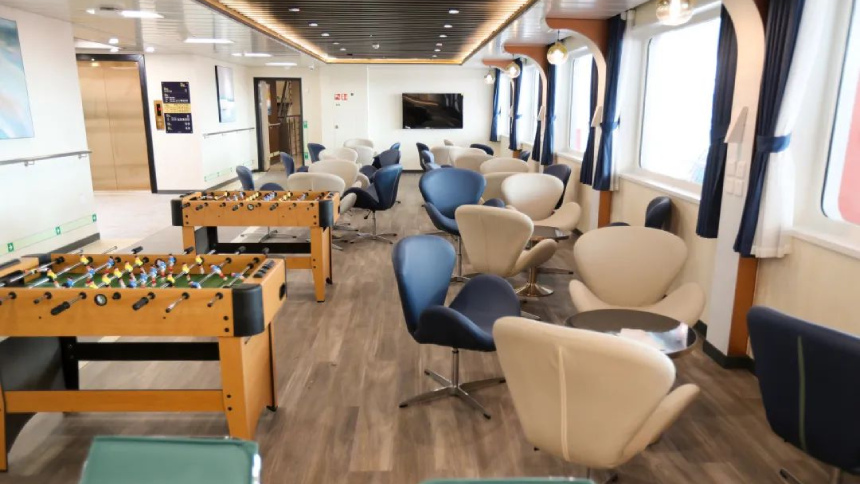 Jilong Dao is also equipped with an integrated intelligent passenger system to provide hotel-style intelligent services such as one-pass and one-code access to the various facilities available on board.

Loading and unloading of vehicles is done via bow and stern doors. Vehicles may transfer between decks with the aid of interior ramps and cargo lifts for greater efficiency.

Jilong Dao is the first in a series of two ferries that GSI is building for COSCO. Its yet unnamed sister is still under construction and will operate on the same route in Bohai Bay when it finally enters service. These two vessels will operate alongside 10 other large Ro-Paxes (i.e. each measuring at least 130 metres in length) as part of COSCO Shipping’s ferry division, though the existing vessels will be gradually phased out following the introduction of the newer 208-metre GSI-built ships.