Norwegian ferry operator Norled recently took delivery of a new double-ended Ro-Pax ferry from local builder Westcon Yards. The newbuild has been christened Hjellestad after a lakeside town in Vestland county on the country’s west coast.

Classed by DNV GL and designed by Norwegian naval architecture company LMG Marin, Hjellestad measures 43.2 by 11.5 metres and could transport up to 80 passengers and the equivalent of 16 cars on each trip.

The ferry’s hull was completed at Norse Çelik shipyard in Turkey and was transported to Westcon’s facilities in July 2019 for final outfitting. Interestingly, the hull is made of aluminium as a weight-saving measure whereas other Ro-Pax vessels of similar size and capacity are often constructed using steel.

The development of Hjellestad came about after Norled emerged as the winner of a competitive tender for the provision of year-round ferry services between the Vestland towns of Hjellestad and Klokkarvik for a firm period of 12 years. Each trip will also include stops at two islands southwest of Bergen.

One of the requirements of the concession was that the vessels that would operate on that route needed to be capable of zero-emission sailings. Thus, the new ferry is powered by a battery-hybrid propulsion system that draws electricity from the Norwegian grid and delivers a cruising speed of 12 knots.

As with the other newer hybrid electric vessels in the Norled fleet, Hjellestad is expected to run primarily on battery power when in standard operating mode. Thus, considerable effort was exerted by the designers to ensure that the ferry’s innovative propulsion system would maintain a high degree of reliability even with regular heavy use, as LMG Marin explained to Baird Maritime.

“The electric propulsion system is based on DC grid technology and includes two fully redundant main switchboards that are powered by air-cooled, lithium-ion battery packs. Shore charging equipment is available in the form of a manual type plug-in system consisting of cantilevered swing-out booms mounted on either end of the vessel.

“Since the Hjellestad-Klokkarvik connection is not a very busy one, there is ample time for charging at either port. It was therefore decided that a manual shore charging plug-in system would suffice as it would still deliver the needed functionality even without the costly automated features of more complex shore charging systems, which are more appropriate for busier, high-traffic routes.

“In the event of an emergency or if shore charging is not possible, there is an available standby diesel generator that operates on second-generation biofuel to further reduce emissions. However, the vessel’s electric energy system was developed with full redundancy features so that emergency power can still be drawn from the main batteries, meaning that the dedicated standby generator will be used only as a last resort.”

LMG Marin adds that installing a hybrid propulsion system that guaranteed reduced emissions was not the only goal of the design process. Improved efficiency was deemed as another key objective as it would mean lower power requirements, which then meant lower costs.

Improved efficiency became a reality for Hjellestad through the incorporation of energy-saving features that not only eliminated the need for much larger batteries, but also enabled the ferry to perform better while consuming less power compared to diesel-powered vessels.

“We believe that Hjellestad operates with an energy consumption that is about half that of a traditional diesel-powered ferry of the same size. We achieved this by optimising hull shape through CFD analysis, selecting an efficient propulsion solution, minimising hull weight by maximising the use of extruded panel profiles, and generally reducing hotel and auxiliary loads to a minimum.”

For LMG Marin, the biggest challenge in designing the new ferry was in ensuring it retained its improved operating efficiency without sacrificing its ability to transport impressive loads, like, for example, two 50-tonne trailer trucks.

“These two requirements were somewhat conflicting. However, intensive work using a combination of CFD tools and hydrostatic simulations helped us determine that the feasible solution was to assure sharp angles under lightly loaded conditions and a sufficient waterplane area under heavier loading conditions.”

LMG Marin further commented that additional challenges were encountered as the team worked on devising the vessel’s safety attributes and life-saving equipment, particularly in determining the best routes for passenger and crew evacuation as well as developing efficient firefighting systems.

“We found that the rules relevant to passenger and crew evacuation, like in the case of a fire on the vehicle deck, are not really suitable for a vessel of this size. We therefore had to apply a risk analysis approach to validate the ferry’s safety level to the satisfaction of the local authorities.

“The installation of efficient firefighting systems suitable for the carriage of dangerous cargo in an aluminium vessel also proved challenging. The existing relevant rules apply only to steel-hulled vessels and so we took it upon ourselves to develop a system based on a combination of passive and active fire protection measures that we believe would make Hjellestad just as safe as any similarly-sized vessel of steel construction.”

Hjellestad had originally been scheduled to enter service on the Hjellestad-Klokkarvik route in October of last year. However, the travel restrictions put in place due to the Covid-19 pandemic meant that the ferry was unavailable for operational sailings until the first half of 2020. 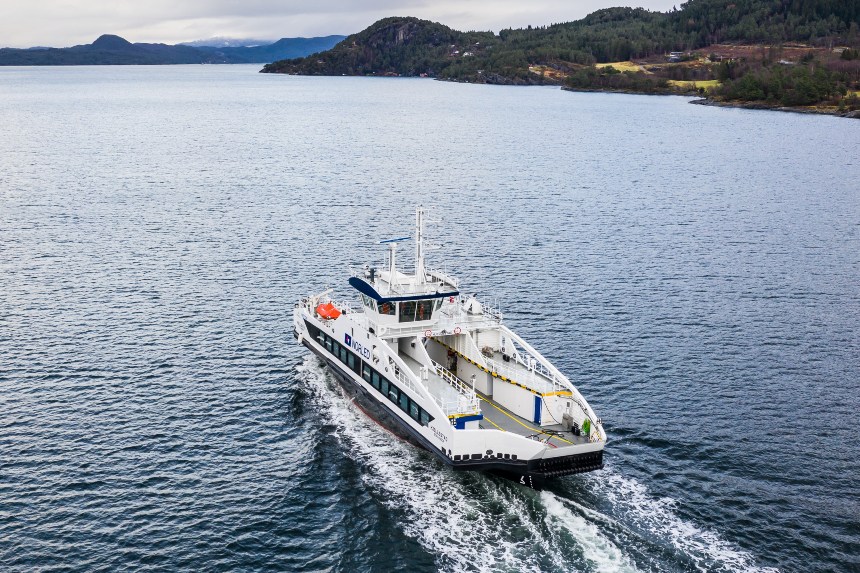