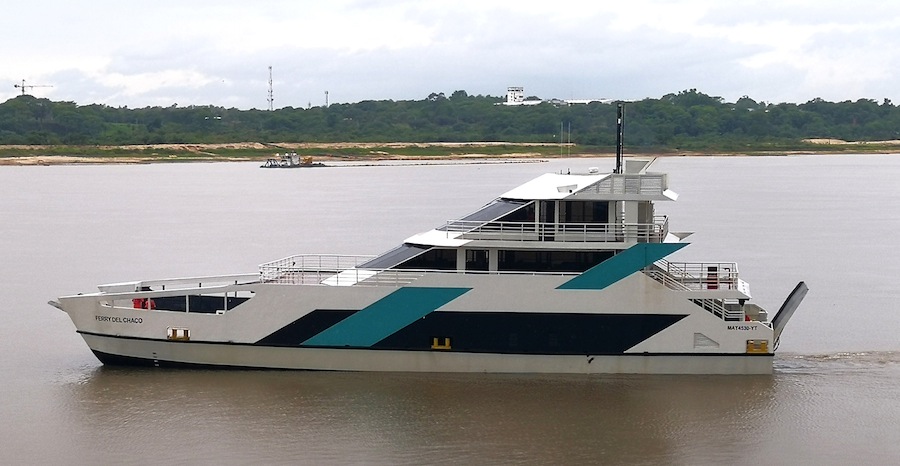 One of the most logical ways to deal with congestion issues is to get vehicles off the roads. A growing number of administrations are doing this by implementing Ro-Ro ferries where practical. The Rio Paraguay, flowing through the lowlands of land-locked Paraguay offers an excellent riverine option.

Recently launched from Terminal Occidental’s own shipyard, the Chaco ferry in Paraguay meets these criteria. Serving multiple ports on both sides of the river around Asunción and the Port of Villa Hayes, the ferry will be an important addition to the area’s transportation infrastructure.

Built of A36 naval steel on a catamaran hull, the 35.85- by 10.85-metre ferry features hydraulically operated ramps both fore and aft for ease of loading. Capacity on the main deck will allow for up to 18 light vehicles at a time.

Above the vehicle deck, comfortable air-conditioned seating is provided for up to 90 passengers with a coffee kiosk, toilets, video entertainment and panoramic views.

On the third deck, a VIP passenger area, is located just aft of the futuristic wheelhouse. The area includes provision for meetings and a minibar plus additional toilets. An emergency generator is installed on an open after deck. 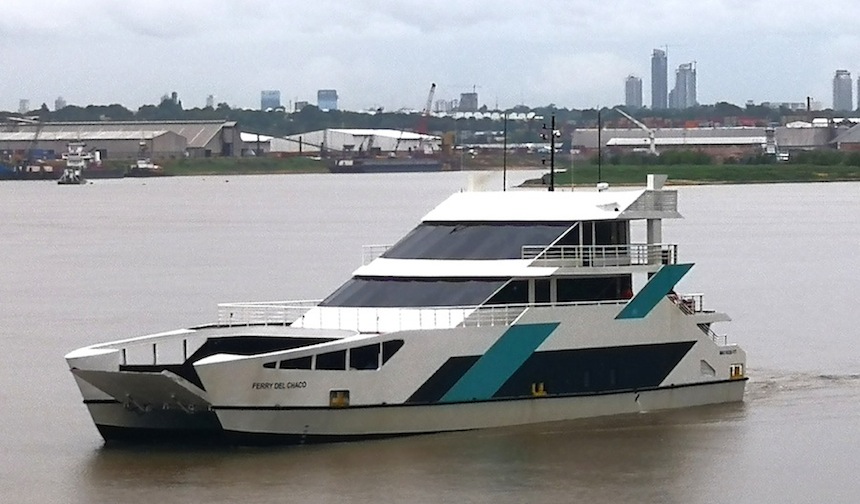 The ferry will travel its 25-kilometre total route at speeds up to ten knots. Engine rooms, located in the twin catamaran hulls, are each fitted with a Cummins KTA19-M3 diesel engine producing 600 horsepower (450 kW) at 1,800 rpm. The engines turn four-blade bronze 1,100 by 1,032mm propellers through Twin Disc MG521 gears with 3:1 reduction.

The hulls are divided into multiple watertight compartments and include fuel (14,000 litres) and potable water tanks (6,000 litres) as well as ballast tanks.

Named Ferry Del Chaco, the vessel is classed by RINA to all relevant SOLAS and IMO standards. It will operate with a crew of five.