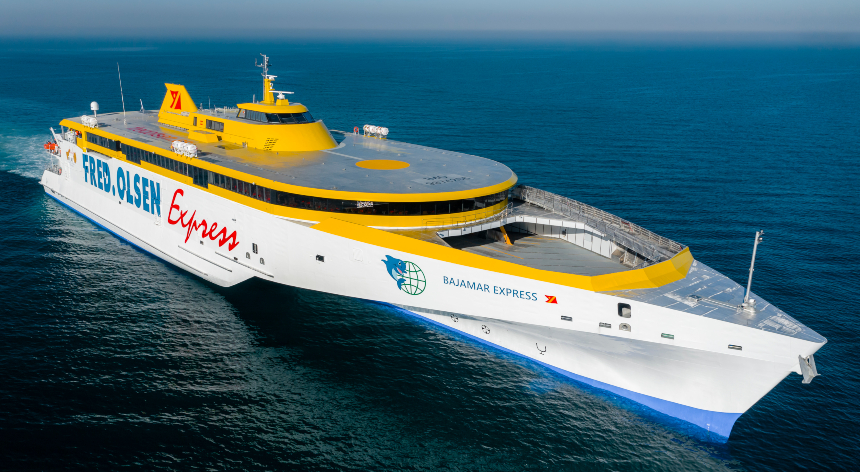 Austal Australia has handed over a new high-speed, aluminium trimaran ferry to Fred Olsen Express for operation in the Canary Islands.

Named Bajamar Express, the vessel is the first in a series of two Ro-Pax ferries ordered by Fred Olsen Express under a €126 million (US$142 million) contract awarded to Austal in October 2017. It is also the fourth high-speed ferry to be built by Austal for Fred Olsen as well as the second trimaran and the second largest vessel in the operator’s fleet after another Austal product, the 2005-built, 126-metre Benchijigua Express.

Fred Olsen claims the order for Bajamar Express and near identical sister Bañaderos Express, which is currently under construction at Austal’s Philippine shipyard, was placed after it became evident to the operator that Benchijigua Express‘ streamlined trimaran hull form offered a host of benefits, such as reduced fuel consumption and increased stability that was possible even at high speeds.

Fred Olsen had also noted the reduced wave crash generated by the Benchijigua Express during regular high-speed operations, which in turn meant a lower impact on surrounding environments and marine life forms. As the Canary Islands’ economy is primarily tourism-driven with a significant portion focused on the region’s rich marine environment, such an attribute was considered essential in all newbuild vessels slated to join the Fred Olsen Express fleet, and the newer Austal trimarans were no exception.

Bajamar Express has an LOA of 118 metres, a beam of 28 metres, a draught of 3.8 metres, a maximum speed of 44 knots, and capacity for up to 1,100 passengers and 276 cars. Besides the usual onboard amenities that include bars, kiosks, a retail shop, and a children’s play area, the vessel has a VIP section that boasts a sound-proof interior, an exclusive balcony area, executive-style reclining seats, a large skylight, automatic sliding doors, and GPS-configurable mood lighting that automatically adjusts to provide optimum ambient lighting depending on the time of day.

Fred Olsen adds that, in adherence to Spain’s Covid-19 travel restrictions, Bajamar Express has been configured with the appropriate measures to help prevent the spread of the disease. These measures include protocols that are certified by Aenor, the Spanish Association for Standardisation and Certification.

Like all of the newer vessels in the Austal line, Bajamar Express has been fitted with Austal’s proprietary motion control system, the most visible features of which are T-foils mounted on all three lower hull sections. The system was developed to ensure greater stability as well as improved comfort for passengers and crew even as the vessel cruises at a speed of 38 knots at full load.

A central control unit monitors the vessel’s motion through an array of sensors located throughout the hull and then utilises an advanced algorithm to compute the damping forces that each of the three T-foils needs to achieve to control pitch and roll and in turn ensure a stable ride under a range of sailing conditions. The hydraulically-powered T-foils are adjusted accordingly in real-time by the motion control system, therefore freeing up the crew to focus on manoeuvring the vessel.

The motion control system, as well as the vessel’s other major systems, can be remotely monitored via the crew’s mobile devices thanks to Austal’s own class-approved integrated monitoring and control software. However, should problems arise with the motion control system, the vessel’s engineer control station has an operator override function that would allow the crew to assume full manual control of the T-foils if necessary.

The effectiveness of Bajamar Express‘ installed motion control system was confirmed during a series of sea trials held off Western Australia in the second quarter of 2020. In one stage of the trials, the ferry was configured in such a way that it carried 80 per cent from maximum deadweight but was nonetheless able to maintain a stable attitude at an average speed of 37.6 knots at 85 per cent MCR.

Bajamar Express has arrived in Tenerife following a 20-day voyage covering over 9,000 nautical miles and is slated to commence operations between Santa Cruz de Tenerife and the Gran Canaria municipality of Agaete within the month. Meanwhile, sister vessel Bañaderos Express is scheduled to be delivered to Fred Olsen in the first half of 2021.