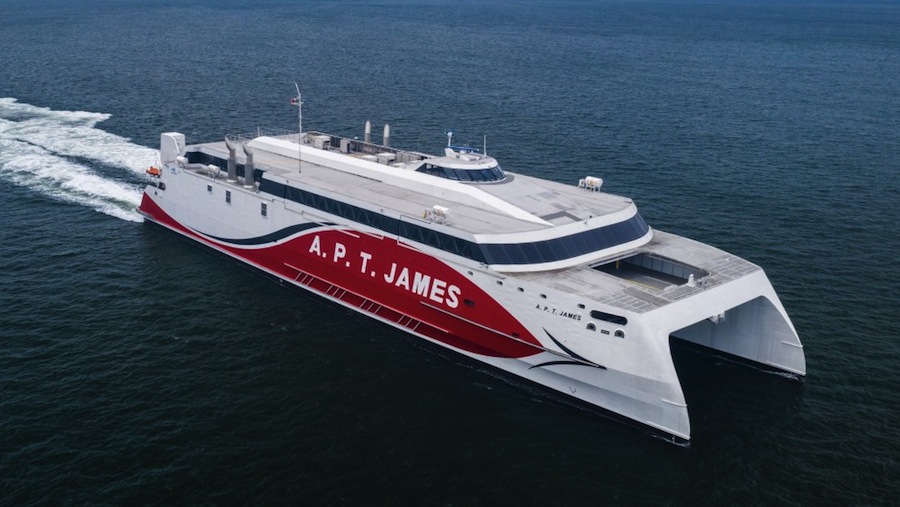 Austal Vietnam has completed a new catamaran Ro-Pax ferry for the National Infrastructure Development Company (NIDCO), a government-owned company that provides infrastructure and transport services within Trinidad and Tobago.

The DNV GL-classed newbuild has been christened A.P.T. James in honour of the late Alphonso Philbert Theophilus James, a famed rights activist who had served in Trinidad and Tobago’s legislative council while the islands were still a British crown colony during the mid-twentieth century.

The 94- by 26-metre A.P.T. James was designed by Austal Australia to be used to transport both vehicles and passengers at high speeds between the islands of Trinidad and Tobago via a government-licenced “sea bridge” route. The ferry is of all-aluminium construction and has capacity for 926 passengers and up to 250 cars, though the onboard cargo decks may allow the carriage of a total of only 222 cars to free up a combined 90 lane metres for other freight. 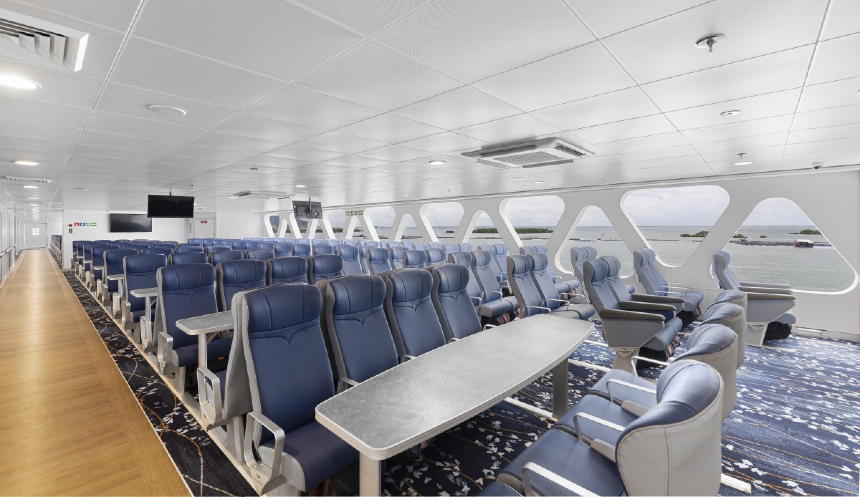 The passenger seating in the upper deck is divided into a first-class section for 132 people and a large economy section for the remaining passengers. Amenities on this deck include a bar, a galley, cold storage, a sick bay, an information desk, a crew mess area, and toilets. All vehicles meanwhile will be stowed aboard the main and mezzanine decks below.

Although the vessel lacks space for a full helicopter deck, heliborne transfers are still possible thanks to an aft pickup area on the bridge deck. It is through this platform that personnel and light cargo can be brought onto or offloaded from a hovering helicopter via a winch system.

Even with its massive size, A.P.T. James boasts a remarkably low draught of only 3.3 metres, making it better suited to operate between the two islands. Also, the high degree of onboard automation means that no more than 20 personnel would be sufficient to crew the ferry during regular sailings.

The vessel is powered by a quartet of MAN 16V 28/330 STC engines connected to four Reintjes VLJ7531 gearboxes driving KaMeWa 112 S3 waterjets. This propulsion arrangement – coupled with Austal’s signature raked bow and optimised hull design – could deliver a speed of 37.5 knots at 90 per cent MCR, allowing the ferry to complete a one-way trip across the sea bridge in under three hours. 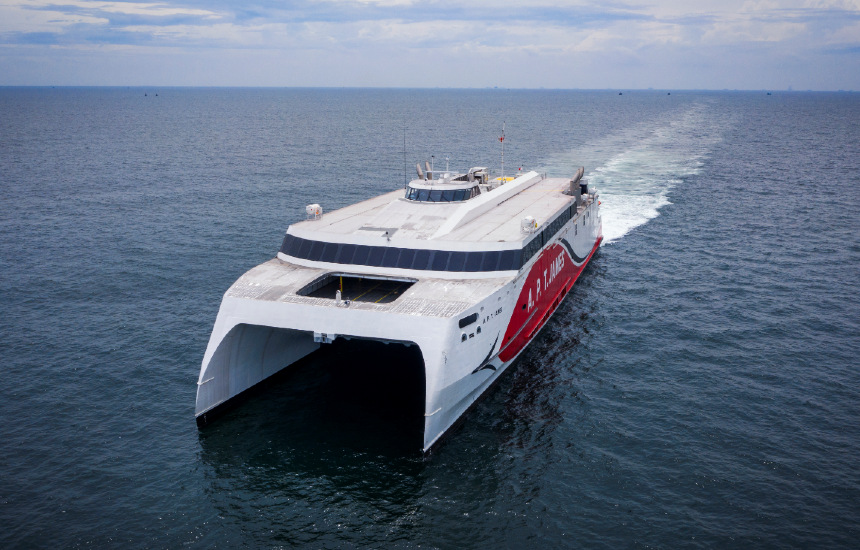 As with many of the newer Austal-built high-speed vessels, A.P.T. James is equipped with an advanced motion control system to ensure greater stability and comfort even while cruising at speeds above 30 knots at full load.

In the case of A.P.T. James, the motion control system includes a set of four hydraulically-powered T-foils mounted on the bottoms of the twin hulls and a central control unit that utilises an array of sensors to monitor the vessel’s motion as it cruises along the water. An advanced algorithm continually computes the damping forces necessary for ensuring a stable attitude, and the central control unit then automatically adjusts each of the four T-foils in such a way that the entire vessel would be subjected to very minimal pitch and roll forces even at the high speeds at which it normally operates.

Austal’s own class-approved integrated monitoring and control software makes it possible for A.P.T. James’ motion control system to be remotely monitored by the crew through their mobile devices. However, the ferry also features a dedicated engineer’s station with an override function should there be a need for the crew to assume full manual control of the T-foils, like in the case of an onboard emergency that would render the motion control system inoperative.

A.P.T. James is currently completing its delivery voyage to its new owners in Trinidad and Tobago with a crew from International Maritime Services, after having departed Austal Vietnam’s Vung Tau facilities. The ferry is expected to begin operational sailings along the islands’ sea bridge route before the end of the year. 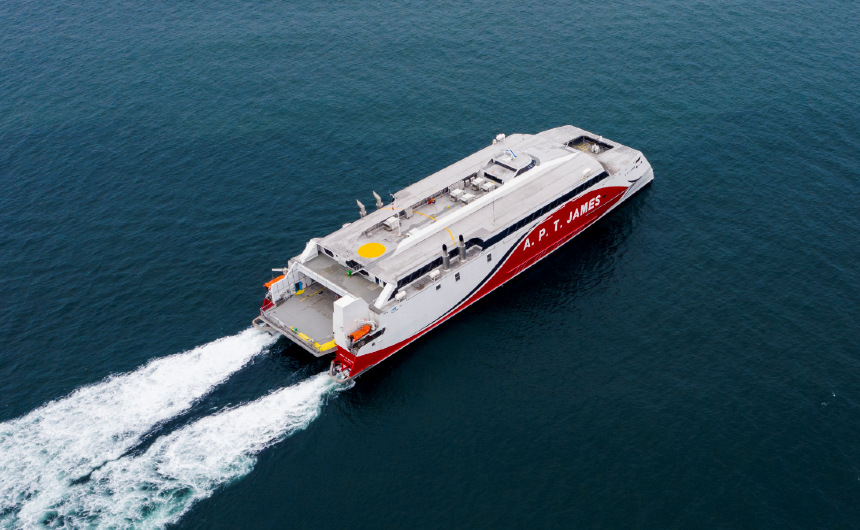 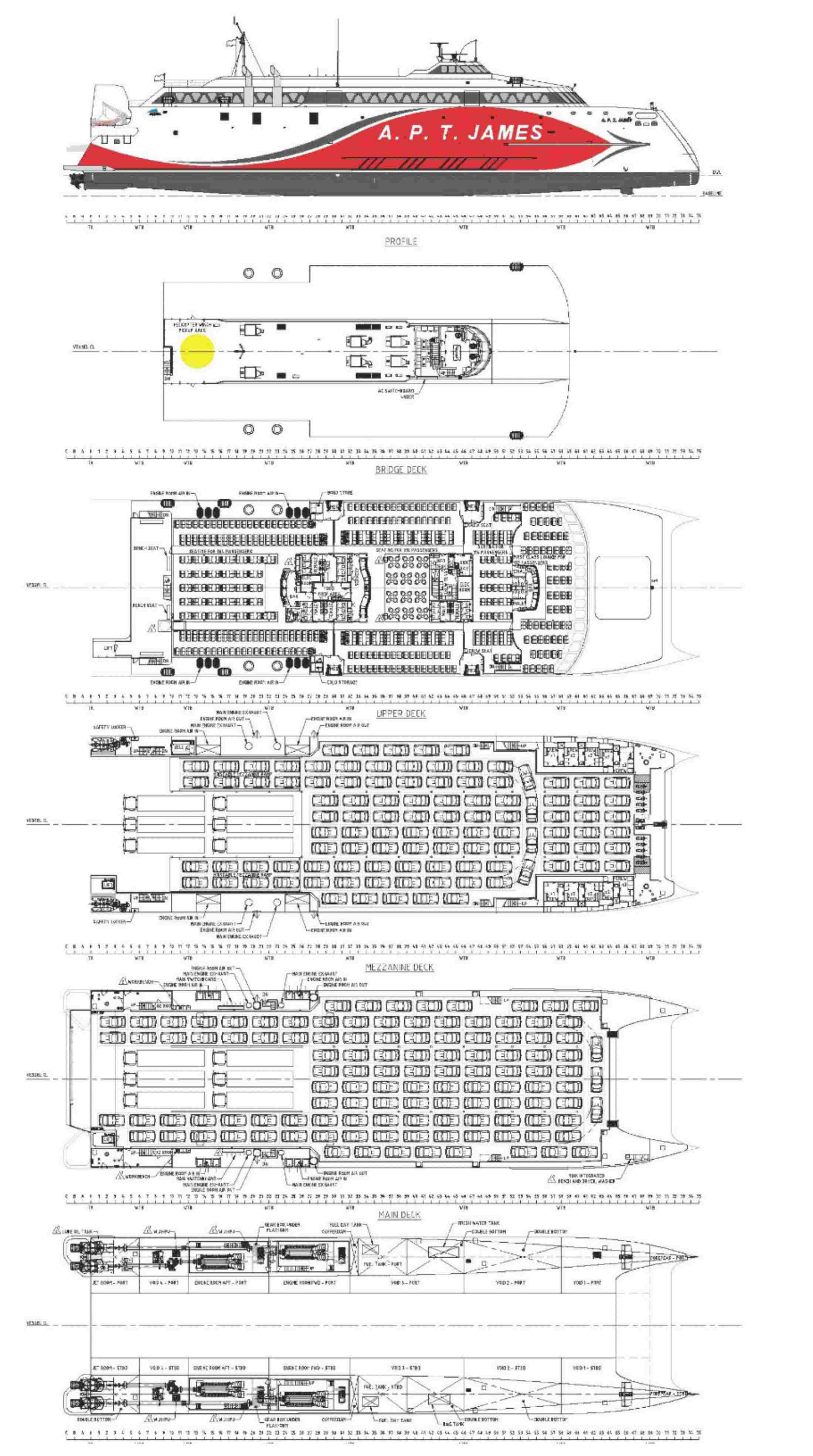