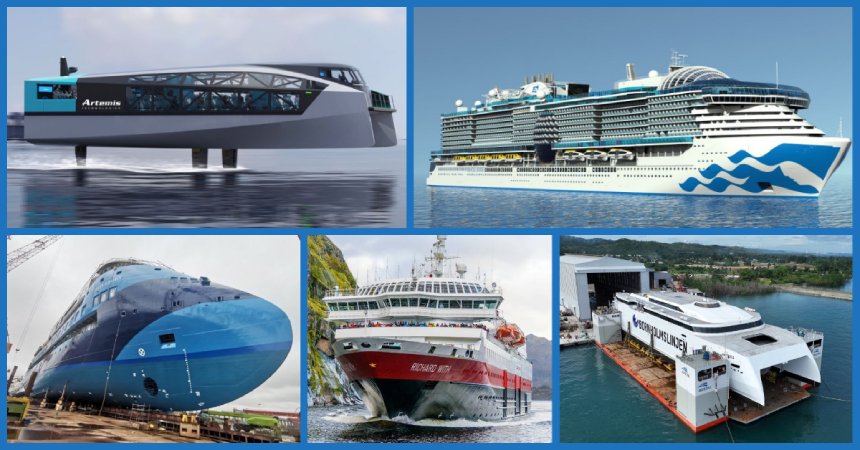 A Norwegian cruise ship re-enters service after being fitted with a new propulsion system while construction is nearly complete on a US-operated polar expedition ship and a Danish-owned fast catamaran ferry. Design and construction works are also underway on an electric hydrofoil ferry for operation in the UK and a cruise ship for a US-based customer.

Hurtigruten Norway, the coastal cruise brand of Norwegian shipping line Hurtigruten, has welcomed the cruise ship Richard With back into its fleet following an upgrade program that included the installation of a battery hybrid propulsion system.

The refit was carried out at the facilities of local shipyard Myklebust Verft. Aside from being fitted with new engines and two large 1,120kWh battery packs, Richard With now also has selective catalytic reduction (SCR) systems, new propeller blades, a new bulbous bow, improved boilers, a retractable azimuthing thruster at the stern, and an advanced wastewater treatment plant.

Another six ships from the Hurtigruten Norway fleet will undergo a similar refit program, which will be concluded in 2024.

The Austal Australia-designed 115-metre Express 5 will have capacity for 1,610 passengers and up to 450 cars once completed. The propulsion system can be configured to run on LNG and will deliver a service speed of 37 knots.

Facilities will include a casual dining restaurant, a bar, and a children’s play area.

The Bureau Veritas-classed vessel will measure 104 by 18 metres and will have a maximum guest capacity of 200. Amenities will include a swimming pool, a bar, restaurants, lounges, a boutique, a gym, and a spa.

The ship’s hull is built to Ice Class 1A and PC6 notations.


Northern Ireland-based engineering company Artemis Technologies has unveiled images of a proposed design of a high-speed ferry fitted with hydrofoils and all-electric propulsion.

Each ferry in the series will have a length of 24 metres, capacity for 15 passengers, a top speed of 38 knots, and a range of 115 nautical miles at a cruising speed of 25 knots.

The first vessel in the series is scheduled to enter service in 2024. It will be operated by Condor Ferries.

Carnival Corporation brand Princess Cruises recently presented images of what will be the largest ship in its fleet with capacity for 4,000 guests.

Named Sun Princess, the 175,000-tonne bespoke vessel will have 2,157 staterooms, multi-story dining rooms, and a three-story atrium. Power will be provided by an LNG propulsion system.

Sun Princess is under construction at Italian shipyard Fincantieri. It is scheduled to sail on its inaugural season in early 2024.