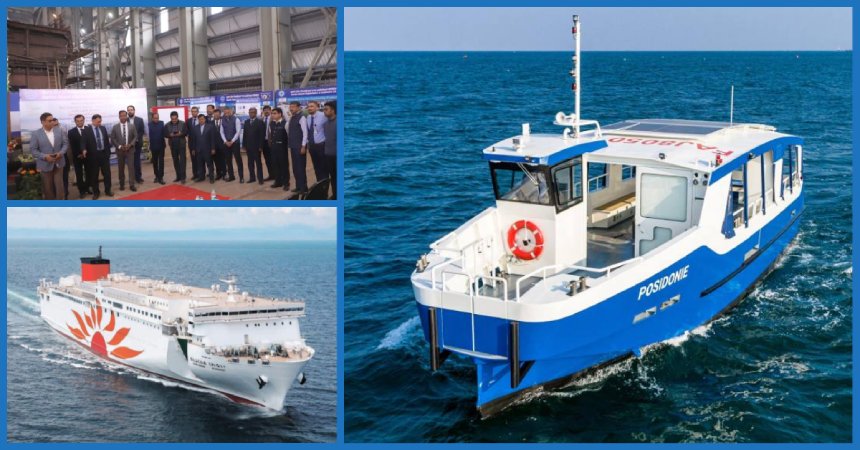 An LNG-fuelled ferry begins operational sailings on Japan’s inter-island routes as a shuttle boat is handed over to an owner in southern France. Construction is meanwhile underway on an inland ferry for eastern India and a large-capacity catamaran Ro-Pax for an Argentine customer.

Built by Mitsubishi Shipbuilding, Sunflower Kurenai is being operated by MOL group company Ferry Sunflower. It will serve the Osaka-Beppu route between Osaka and Oita Prefectures.

The newbuild measures 199 metres long and can transport 716 passengers and 137 lorries measuring 13 metres each.

Dalian, China-based ODC Marine has completed construction on an electric passenger shuttle vessel that will operate out of the commune of Martigues in southern France.

The Eric Jean-designed Posidonie has a length of 12 metres, capacity for 45 passengers, two 125kWh lithium iron phosphate batteries, and two 20kW electric motors. The batteries will enable the vessel to sail for up to nine hours at a speed of 5.5 knots.

The interior spaces are configured to help reduce outside noise and vibration, improving passenger comfort.

Indian shipyard Garden Reach Shipbuilders and Engineers (GRSE) has laid the keel of a new ferry ordered by the government of the state of West Bengal.

The yet-unnamed vessel will replace some of the older diesel-powered ferries currently in operation on the Hooghly River.

GRSE said the ferry will be powered by electric propulsion.

Argentine transport company Buquebus has awarded a contract to an Australian shipyard for the construction of a new Ro-Pax ferry fitted with battery propulsion.

The vessel will have a length of 130 metres, a design speed of 25 knots, and capacity for 2,100 passengers and 226 vehicles. It will be operated on routes between Argentina and Uruguay.

Construction of the ferry will take place in Tasmania.