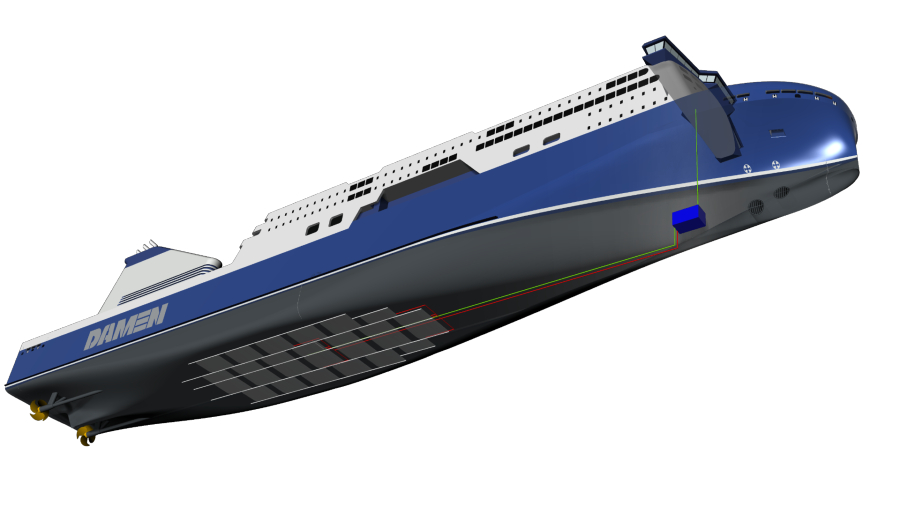 At the Royal Institution of Naval Architects’ (RINA) Sustainable and Safe Passenger Ships conference held earlier this year, Damen Shipyards Group unveiled a new type of vessel hull feature concept that is expected to lower fuel consumption and emissions by reducing resistance in water while maintaining regular operating speeds. With such features in place, it would be possible for existing vessels to require less in terms of power generation and storage without sacrificing range, speed, and other performance parameters.

Damen R&D engineer Sasha Zverkhovskyi was kind enough to talk to Baird Maritime to give a more detailed overview of the company’s air cavity system and its benefits.

How did the idea for the Damen Air Cavity System (DACS) come about? What events or factors led to Damen deciding to develop this concept for passenger vessels?

DACS came into being due to a research project conducted at Delft University of Technology (TU Delft) in the Netherlands. It is a result of years-long fundamental research which was a subject of my PhD project performed at TU Delft. Damen was supporting this project and took over this technology for implementation.

In general, the system is suitable for different ship types with a flat bottom. We see the biggest interest in the system from passenger ship owners, as their industry is very environmentally aware and open to innovative technologies. A good example of that is that we see that passenger ships are already actively adopting fully electric or hybrid propulsion systems. For those ships, application of DACS becomes particularly interesting.

How does the air cavity system work? How will vessel operations benefit from it?

The system forms an array of stable air cavities on the bottom of a ship at speed and by that, it reduces the wetted area and therefore resistance of a ship. Reducing the resistance leads to less need for propulsive power. As a result of this, there is less fuel/energy consumption, and less burned fuel means lower emissions.

Additionally, reducing the ship’s resistance leads to a lower propeller load and less noise generated by the propellers. This reduces the noise level both on board and underwater.

Why did the team decide to focus on passenger ships in validating the effectiveness of the air cavity system?

We are also considering to apply DACS on other ship types, and so passenger ships are not the only ship types that we are focusing on. But as said in response to the earlier question, passenger ship owners are very active in adopting “green” technologies.

Another advantage of seagoing passenger ships is that they have fin stabilisers that reduce the roll motion of a ship. That improves the operability of the system.

Besides Damen’s in-house R&D department, were there other organisations involved in the project? What were their respective contributions?

The technology originated from TU Delft. Damen continues to collaborate with TU Delft on the subject of air lubrication.

Is it possible for the air cavity system to be incorporated into existing vessels or would it be more feasible for a new vessel to be constructed from the outset with the system already built in?

An advantage of DACS is that it can be relatively easily installed on existing vessels during docking. The only major challenge lies in ensuring the outer elements of the system are installed on the bottom of the hull without affecting the structural integrity of the vessel. It requires a few hull penetrations for air supply, pipes, valves, a compressor, and a control unit. Additionally, some sensors need to be installed in order to monitor the presence of cavities in operation.

We noticed in the rendering provided that the air cavity system had been incorporated into a monohull vessel. Could the system also somehow be incorporated into vessels that have other types of hull designs like catamarans, trimarans, SWATH, etc? Why or why not?

Kindly provide an overview of the tests that your team conducted to validate the system. Where were the tests conducted? What specialised equipment (i.e. scale models, water tanks, etc.) were used?

The system went through a series of validation tests. The concept of the system was first developed and extensively tested on a flat plate in a water tunnel facility at TU Delft. After promising results from the water tunnel tests the system was installed on a ship model of an inland waterway vessel and tested at the Maritime Research Institute Netherlands (MARIN).

The next step Damen took was to perform a full-scale feasibility test. We wanted to make sure that the system worked in normal conditions when installed on a real hull and sailing in real flow. Thus, we installed part of the system on the bottom of a pontoon and performed visualisation tests sailing on a river. The tests proved that stable air cavities can be created under typical operating conditions, thus confirming that the system can be scaled up for use on full size vessels. We also recently performed model tests on an inland cruise ship to study the performance of the system in shallow water.

The tests were performed at DST in Duisburg, Germany. Another recent study, conducted at MARIN, was dedicated to the performance of the system on a seagoing cruise ship.

What results did your team achieve during the tests? What do these results say with regard to improving the operating efficiency of passenger vessels? What could be expected in terms of vessels’ fuel consumption, speed, stability, emissions, etc?

Based on the results of towing tank tests, net power savings of up to 18 per cent and five per cent were achieved for the inland waterway cruise ship and the seagoing cruise ship, respectively, including the required compressor power. The reduction of the propulsive power at certain speed can be interpreted as fuel savings and emissions reduction. Alternatively, while keeping the same propulsive power, the vessel’s speed can be increased.

With regards to stability, the cavities create a free surface on the bottom of the vessel which has the same effect as liquid tanks inside of a vessel. This effect is possible to account for and by separation of the cavities in transverse direction, the effect of a free surface can be reduced to acceptable level.

It must be noted that the cavities are present only when the vessel is at speed. Also, when the vessel at speed is listed at a certain angle, the area covered by cavities will be reduced, thus limiting the effect of the free surface on stability.

Is there still a need to conduct further tests using actual full-scale vessels under operating conditions typically encountered offshore or even in inland waterways?

With the information we have so far, the system is ready to be installed on vessels in operation. Once the system is installed, it will need to undergo additional tests to verify the expected performance. Long-term monitoring of the performance in operation would provide us with valuable input for validation purposes as well as possible improvements to the system.