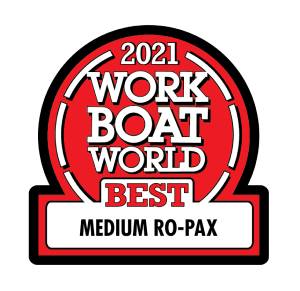 This very interesting double-ended fjord Ro-Pax ferry was designed from the outset to be able to be hydrogen-powered when such fuel becomes available. So, she was designed by Sembcorp Marine subsidiary LMG Marin to be “future proof” and built to an impressive standard by Westcon Yards.

Initially, she will be battery electric-powered with electricity provided by shore power in hydroelectricity-rich Norway. So, even in early operations, she is impressively environmentally friendly as is now imperative in her home waters. Hydra is replete with numerous interesting and innovative touches that, when combined, make it a ferry of the future.

“The ferry is a pioneering project of many firsts,” Torbjørn Bringedal, Managing Director of LMG Marin, told Baird Maritime. “This groundbreaking vessel is one of the first hydrogen-powered vessels ever to be built. She is the world’s first vessel to be realised with a liquid hydrogen containment system, and probably the first hydrogen-powered vessel to enter commercial operations.”

Designed with very high energy efficiency for propulsion, auxiliary and hotel loads, the ferry is able to perform optimally with a relatively small hydrogen plant. It is based on a registered and proprietary design layout that ensures efficient ferry operations, with full-beam walk-in and walk-through passenger facilities below a full-beam and full-length non-obstructed Ro-Ro deck.

“Being the first vessel of its kind,” said Bringedal, “Hydra was developed in very close cooperation between LMG Marin and the owner. As there are no specific rules and regulations governing such new vessels, a risk-based alternative design process was adopted to test and verify the vessel’s safety and system solutions.”

The ferry has a very unique exterior design that is meant for it to stand out visually in the same way as it is technically competent.

“The owner, the designer, and the yard have developed a way to utilise hydrogen onboard ships,” added Westcon. “It is also built with battery power and hydrogen power combined with a redundant bio diesel system, and the ferry will be able to operate up to 100 per cent on hydrogen with an energy management system securing the optimal balance at all times.”

The builder remarked that, throughout the whole project, energy consumption has been the focus, from design of optimal hull lines to the choice of propulsion, heat recovery, and LED lighting. The vessel itself has also been regarded as a pathway for the future use of hydrogen in the maritime sector.

“Working on a world’s first project without the guidance of specific rules and regulations is always a challenge,” added Bringedal. “A risk-based alternative design process had to be adopted throughout the entire design, build and test phases of project and the hydrogen solution had to fulfil the closest relevant rules under the IMO IGF code required by class and flag.”

Bringedal added that, due to these complexities, progress was less straightforward with learning curves encountered as the design team addressed safety, functionality, and performance-related issues that surface. Also, the utilisation of hydrogen on a ship involves the introduction of suppliers and manufacturers that are not familiar with the maritime industry and the related approval systems. This required customisation of products supplied, shifts in mindset, and adaptation of project execution models.

“Liquid hydrogen fuelling is a challenging task in itself. A project within a project was needed to design and build an efficient fueling station onshore, to ensure that safe and sufficient bunkering can be performed within the available time slot for a busy ferry operation.”

“We have developed a long list of do’s and don’ts that our customer will benefit from in future projects,” Westcon remarked, explaining how it addressed the challenges it faced during the construction period.

“The prevailing trend we see is that the market is looking for better energy utilisation,” the builder added. “Our customers favour energy-efficient solutions that are best obtained by tailoring projects to specific purposes. In Norway, meanwhile, we see a strong focus on reduction of emissions and alternative energy sources such as batteries and hydrogen. We also see that our customers’ focus on life cycle cost is increasing.”