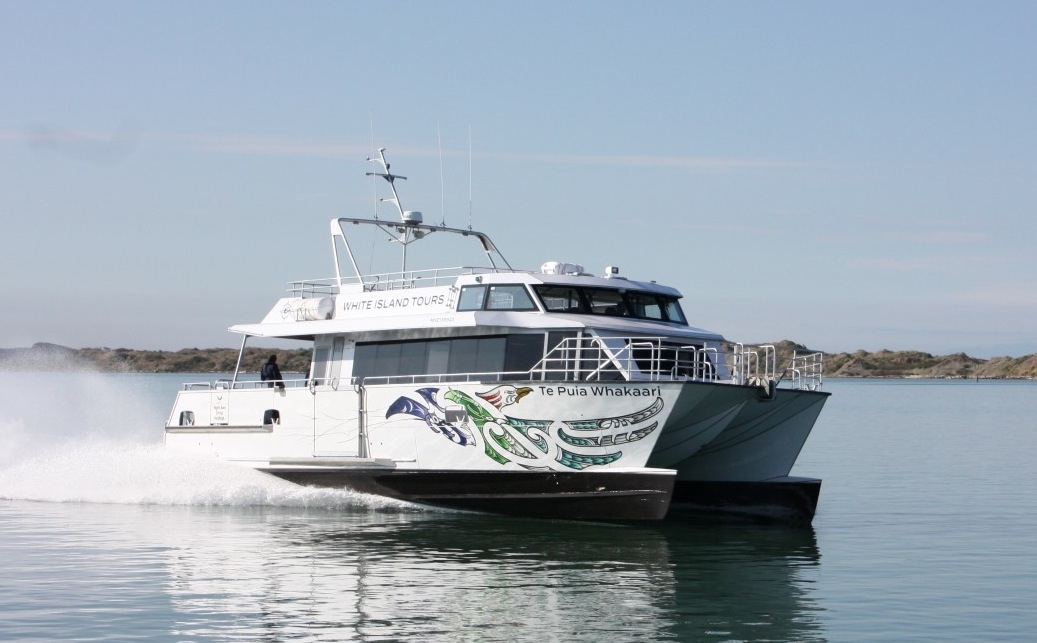 The owners of New Zealand’s White Island Tours, the Ngati Awa Group, approached local designer Teknicraft for the design of a vessel that could average 30 knots across to the island in most weather conditions, would have a shallow draught to enable bar crossings at any time, would be very stable when at rest, and highly manoeuvrable for the required bar crossing.

White Island is an active volcano, situated 28 nautical miles from the east coast of the North Island of New Zealand, in the Bay of Plenty. It is New Zealand’s most active cone volcano, and has been built up by continuous volcanic activity over the past 150,000 years. The crossing is in mainly open, unprotected Pacific Ocean waters.

The design of Te Puia Whakaari is based on Teknicraft’s latest technology, which includes the wave piercing hull, adjustable foil system, and an active ride control system.

The extended bow shape is very fine with low buoyancy. The purpose is to reduce pitching in waves when the vessel is operating in rougher seas. The reduced vertical accelerations not only significantly increase ride comfort, but also reduce drag associated with wave encountering.

The angle of attack of a wing or foil is directly related to the amount of lift it produces at a given speed. The ability to change the angle therefore allows the skipper to adjust the foil to suit the load and conditions in any particular scenario. In particular, when it gets rough and the vessel speed reduces to say 24 knots, the angle can be increased to provide more lift, which also ensures a softer ride. 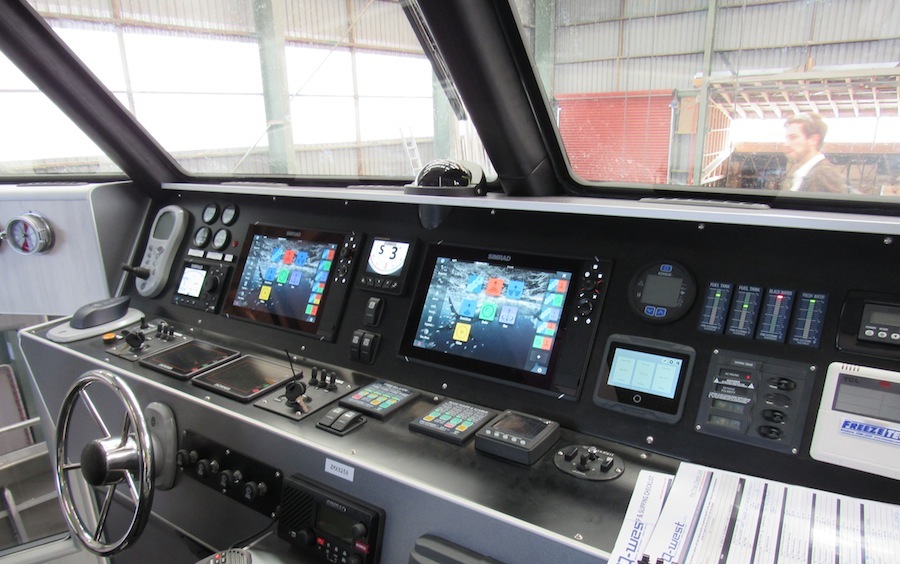 The active ride control system is achieved using interceptors. With independent systems on the port and starboard hulls, any roll of the hull is eliminated. The pitch can also be controlled to remain stable which increases foil efficiency and fuel consumption.

White Island Tours’ current vessels were very limited by the sea conditions they could operate in without passengers becoming unwell, and they had to operate at low speed. The newbuild enables them to operate on a far larger percentage of days in the year, and the high speed ensures that they can do more trips. During peak summer months , this could be three trips per day.

Due to operate over the very narrow and dangerous Whakatane sandbar, the boat is fitted with waterjets enabling trips to go ahead irrespective of tide. Whakatane’s harbour is up a river, and the depth in the bar can get as low as one metre. Both harbour size and budget limited the size of the vessel to 18 metres hull length. 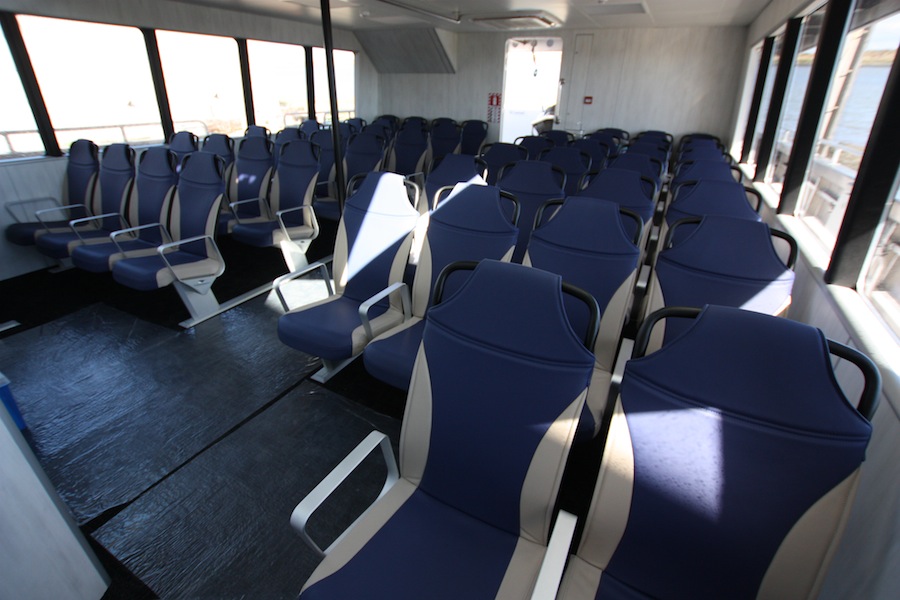 Te Puia Whakaari has full walk-around decks and large windows to enhance the experience when watching dolphins, whales and indeed the smoking island itself. The vessel carries 50 passengers to remain within the limit of certain regulations and crewing requirements.

The vessel is fitted with a modified version of Teknicraft’s tender launch and retrieval system, similar to those fitted to its patrol boats. There is no pier or wharf at the island, so White Island Tours’ passengers have to be transported between the boat and the shore using an inflatable boat. This needs to be done in the shortest possible time to maximize their time on the island. It is therefore important to have a reliable, safe and fast system to launch and retrieve the inflatable, numerous times every day.

The vessel is fitted with a 5.3-metre DSB RIB which can be launched in less than a minute without the use of any crane or other deck machinery. Retrieval is just as quick. A special boarding platform is built into the side of the vessel for passengers to safely step on and off the RIB whilst alongside.

In the engine room, twin 662kW engines drive Hamilton 403 waterjets. Waterjets enabled the designer to minimise the draught, whilst providing excellent manoeuvrability. Moreover it provides station keeping capability which is crucial whilst stationary at sea near the island.

The island trip takes passengers off the boat for an hour or more, during which time the boat awaits at sea. According to Teknicraft, station keeping is a far better solution than an anchor when weather is rough, especially whilst loading passengers on and off the vessel.

During sea trials the maximum, fully laden speed was 41 knots, with a 30 knot cruise speed achieved using only 72 per cent power. 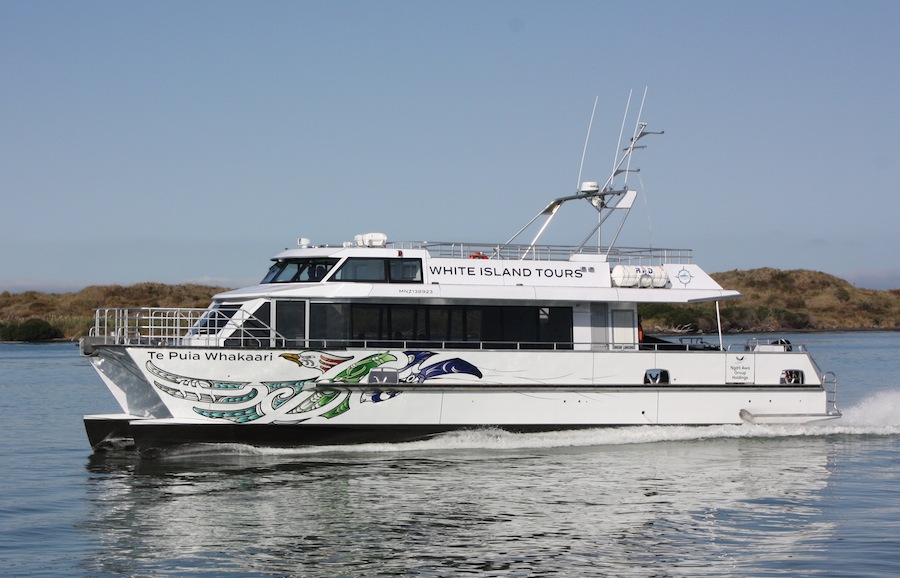 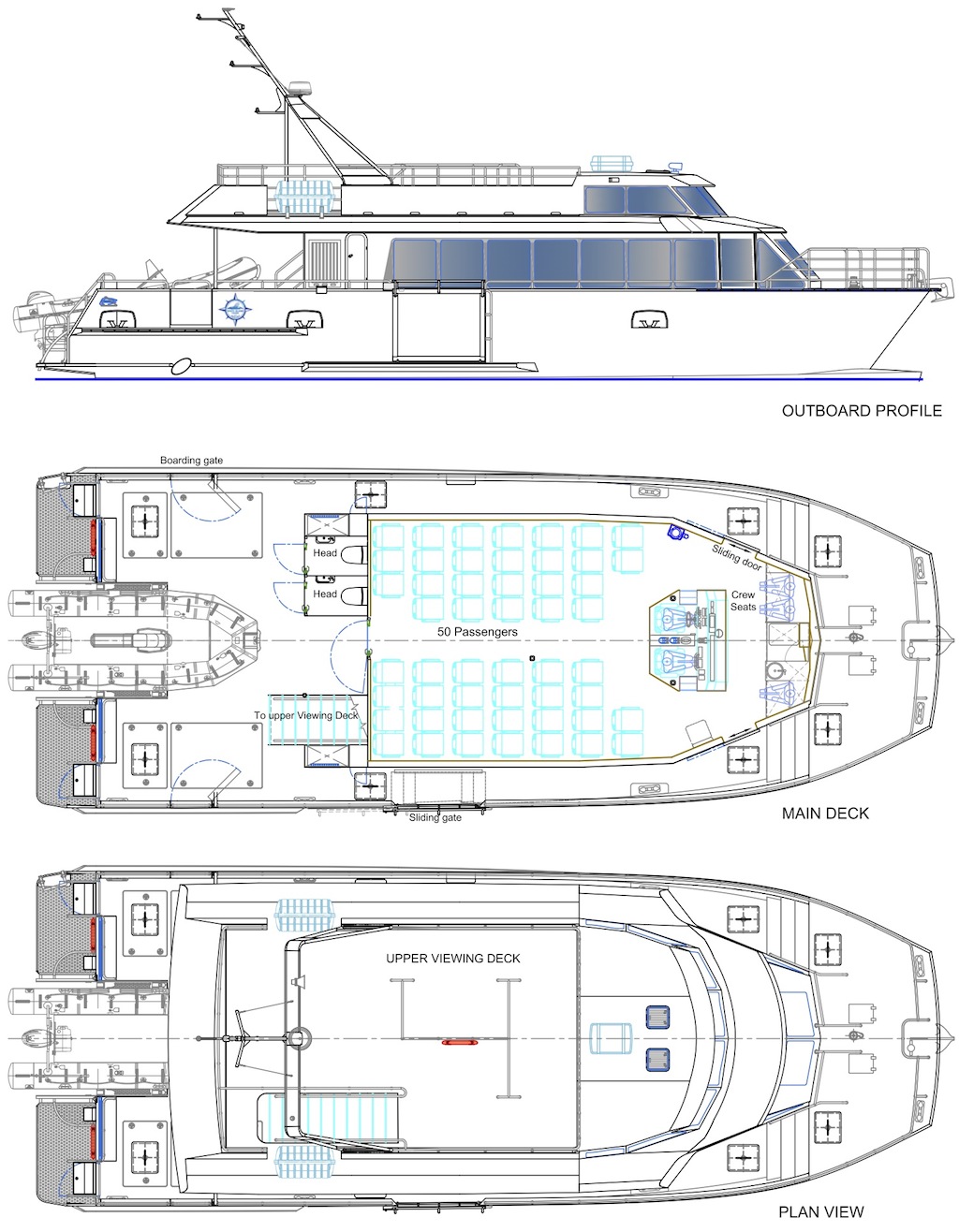