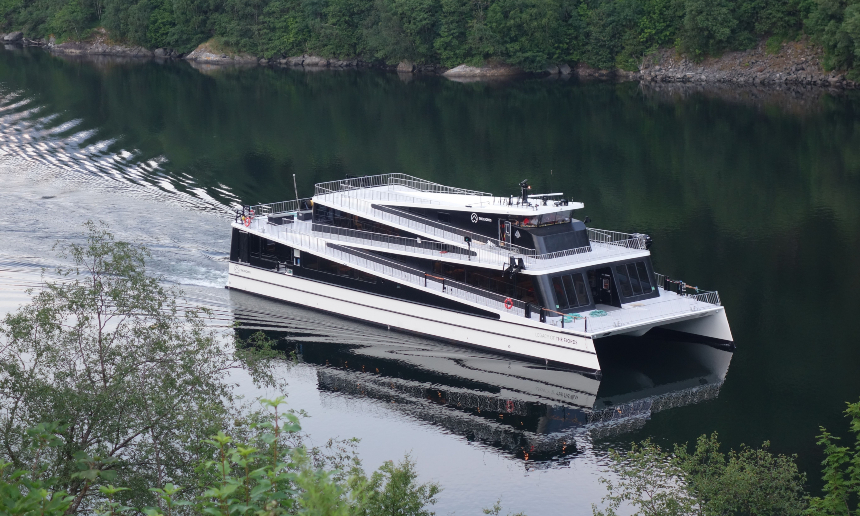 The Fjords, the Norwegian vessel operator jointly owned by ferry company Fjord1 and tourist body Flåm, recently took delivery of a new sightseeing vessel from local shipyard Brødrene Aa. Named Legacy of the Fjords, the DNV GL-classed newbuild is the third in a series of catamaran vessels that were designed and built by Brødrene Aa for the same operator.

Legacy of the Fjords boasts a lightweight carbon fibre hull and fully-electric propulsion in line with The Fjords’ aim of having an emissions-free fleet of vessels that will operate along the 36-kilometre fjord route connecting the villages of Flåm and Gudvangen in southwestern Norway. Forming approximately half of this route is Nærøyfjord, a UNESCO World Heritage Site surrounded by steep, 1,800-metre-tall mountains, small villages dating back to the time of the Vikings, and other distinctly Norwegian features that have led many tourists to label the area as “Norway in a nutshell.”

Thus, The Fjords had required new vessels to be capable of operating with both engine emissions and noise kept as low as possible to minimise any impact on the area’s fragile ecosystem and on the surrounding communities. The diesel-electric Vision of the Fjords delivered in 2016 was the first vessel built by Brødrene Aa to satisfy this requirement, and the operator subsequently placed orders for two additional sister vessels that would run entirely on battery power. The first all-electric vessel, Future of the Fjords, joined the fleet in 2018, and Legacy of the Fjords followed two years later.

The decision by The Fjords to introduce all-electric vessels into service was considered timely, for in early 2018, shortly after the delivery of Future of the Fjords, Norway’s parliament mandated that all vessel traffic passing through the country’s fjords should be emission-free by 2026.

Built at a cost of NOK130 million (US$14.5 million), Legacy of the Fjords has a length of 42.23 metres, a beam of 15.5 metres, a draught of two metres, a displacement of 769 tonnes, and capacity for up to 400 passengers. Two electric motors, each with a rated output of 450 kW, are connected to a pair of 1,475-millimetre controllable pitch propellers to deliver a cruising speed of 16 knots and a maximum speed of 20 knots. The gearboxes and propellers were all supplied by local propulsion specialist Servogear, which had also provided a similar package for the other two vessels in the series.

Legacy of the Fjords draws all its electrical power from a 1,800kWh battery pack supplied by Westcon Power and Automation. Charging is estimated to take no more than 20 minutes and will be performed with the aid of a 40- by five-metre floating glass-fibre quay with a 2.4MWh battery pack that had been jointly developed by Brødrene Aa and The Fjords just before sister vessel Future of the Fjords was introduced into service.

Installed at a shore station in Gudvangen, the quay also has space for consumables and fuel for the company’s fleet of older, conventionally-powered vessels as well as a dedicated facility in which sewage and grey water can be offloaded for treatment on land, thus ensuring vessels are truly emission-free in all aspects. Further, since The Fjords had also stipulated that the new vessel should be capable of providing greater operational flexibility compared to the older vessels in its fleet, Legacy of the Fjords was designed to allow charging, as well as embarkation and disembarkation, to be performed on either port or starboard.

The Fjords claims that, through its reliance on all-electric propulsion, the vessel’s regular operations are expected to help reduce the total emissions of CO2 along the entire stretch of the Flåm-Gudvangen route by as much as 700 tonnes each year.

Among Legacy of the Fjords‘ onboard facilities are three dedicated conference rooms, each one equipped with its own projectors, screens, and audio systems. This will enable the vessel to also serve as a venue for corporate and leisure events in addition to bringing visitors across the Flåm-Gudvangen route and the Nærøyfjord within.