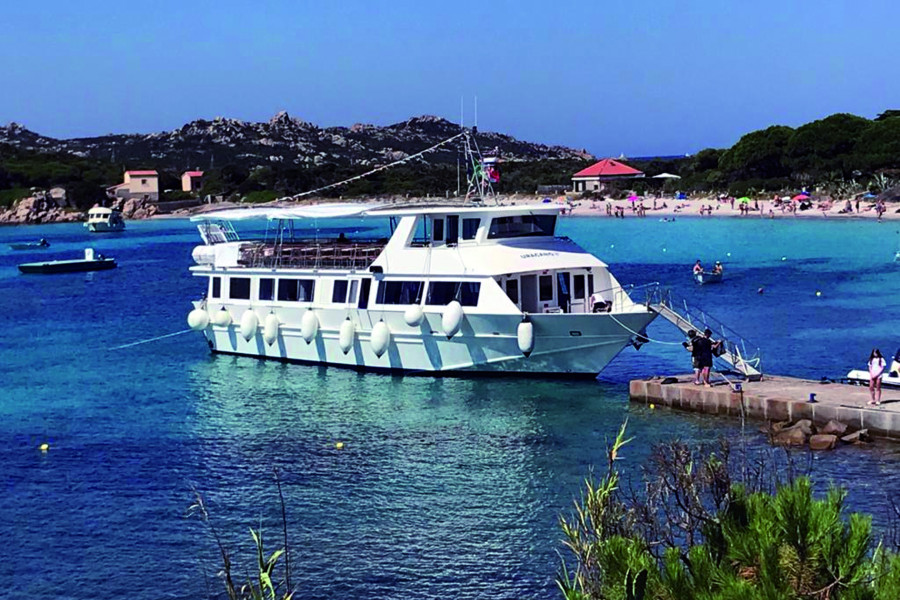 Although the lockdown that had been imposed in Italy due to the Covid-19 pandemic had forced nearly all businesses in the country to significantly downsize their operations from February to June of this year, Boschetti Shipyard in Cesenatico had nonetheless remained busy and even successfully completed the refitting work on a 27.7-metre, wooden-hulled sightseeing vessel with the goal of placing it back into service with a greater passenger capacity and an improved look.

The refit work on the sightseeing vessel Uragano I° was commissioned by Consorzio delle Bocche, a tour transport company based in Santa Teresa Gallura in Northern Sardinia. Despite the problems that came about due to Covid-19 and the subsequent lockdown in Italy, Boschetti was able to complete the refit with minimal delay.

Originally built by Foschi Shipyard in 1974, Uragano I° had sailed under its previous owners for almost 20 years in the Tyrrhenian Sea off Italy’s west coast and in the Ligurian Sea between Corsica and the Italian Riviera. The vessel then joined the Consorzio delle Bocche fleet after it was purchased from the original owners in 2002, and the current operator claims it had spent the next eighteen summers taking tourists on sightseeing cruises off northern Sardinia.

Inevitably, the new owners realised that Uragano I° needed to be upgraded in order to continue being capable of excursions in the Mediterranean off northern Sardinia.

“We decided last year that it was time to modernise the vessel’s design and internal layout,” Giovannino Nicolai, president of Consorzio delle Bocche, told Baird Maritime. “We had chosen Boschetti Shipyard to carry out the work. This is because we were confident in their ability to make this possible, thanks to their considerable experience gained from many years of refitting aging tour boats.”

Thus, Uragano I° left Santa Teresa Gallura in October 2019 and, after having circumnavigated the Italian peninsula, reached Boschetti’s yard in Cesenatico later that same month.

The project to upgrade the vessel had the aim of increasing passenger capacity, as well as improving passenger comfort, mainly by increasing the hull dimensions and, in turn, the free space on board.

Before it was brought into Boschetti’s covered workshop, the vessel’s hull underwent a complete sandblasting treatment. This was done to enable the shipyard workers to more closely analyse the composition of the wooden hull, which the owners claim had remained in remarkably excellent condition despite the age of the vessel. 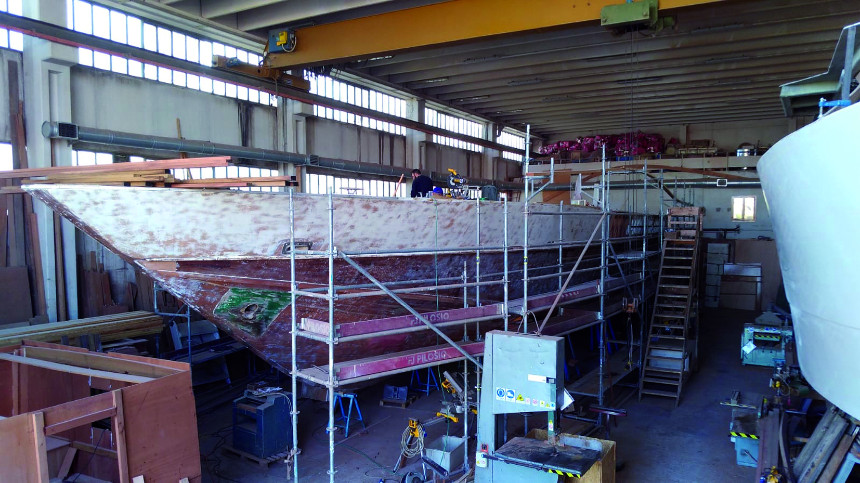 Uragano I° was later brought inside the workshop for demolition works. In this process, the vessel was completely cut and demolished, and this also encompassed the electrical systems on the bridge and in the passenger lounge as well as the plumbing works in the snack bar, galley, and toilet areas.

Following demolition, construction work began on the new superstructure. This superstructure, which had been designed to nearly completely cover the main deck from bow to stern, was essentially a main passenger lounge that maximised the additional free space that had resulted from the increase in the hull dimensions. 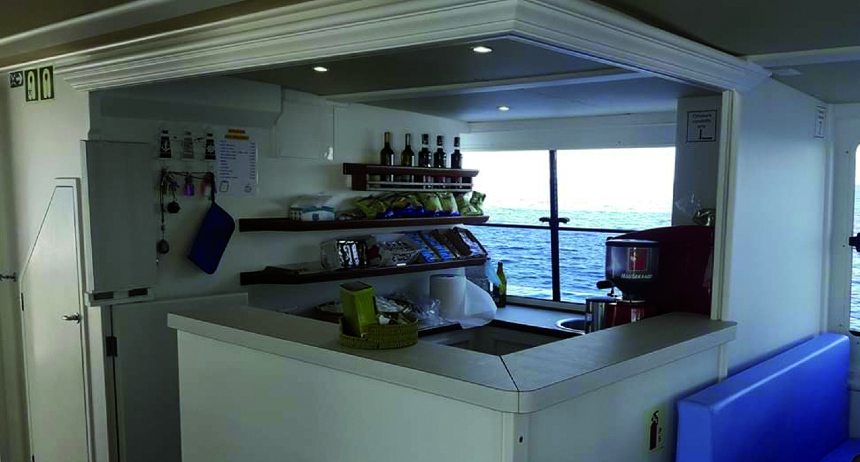 Inside the main lounge is a spacious saloon with large windows on both sides plus an enlarged snack bar and galley area. The interior of this compartment also features benches upholstered with fire-resistant synthetic leather as well as tables. The ceiling has also been completely upholstered with fire-resistant leather in a lighter shade than that of the sofas to help brighten the interior. 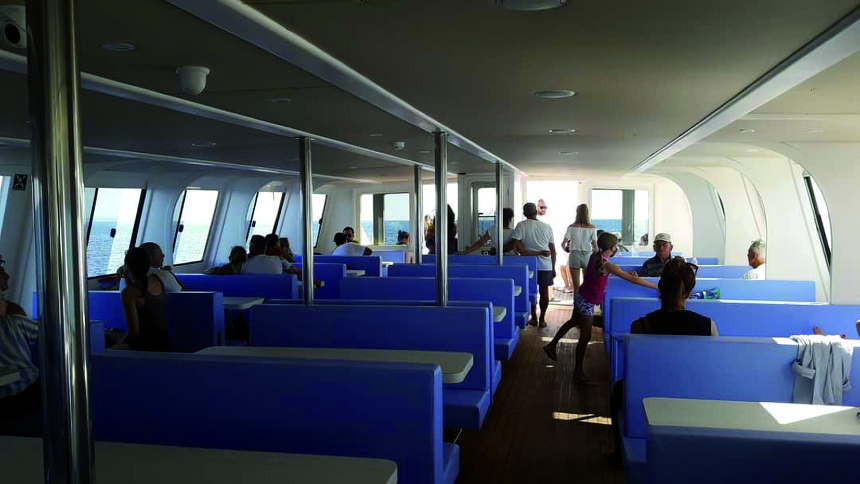 At the rear of the lounge are two stairways that lead up to the sun deck while toilets have been installed on either side of the lounge’s exterior facing the stern. 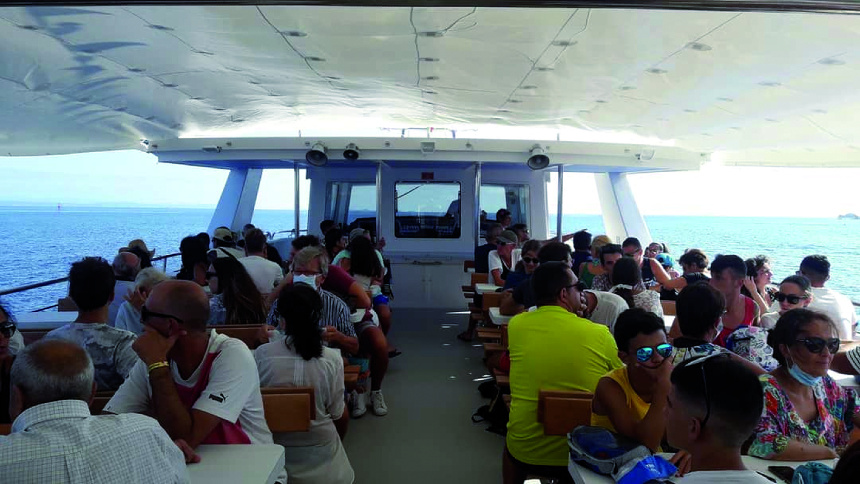 The new sun deck is a very roomy area, fitted with benches, tables, and sturdy steel supports that keep a shelter cover in place to protect passengers from direct exposure to sunlight. Elegantly designed steel handrails have been installed in that area of the vessel as well. 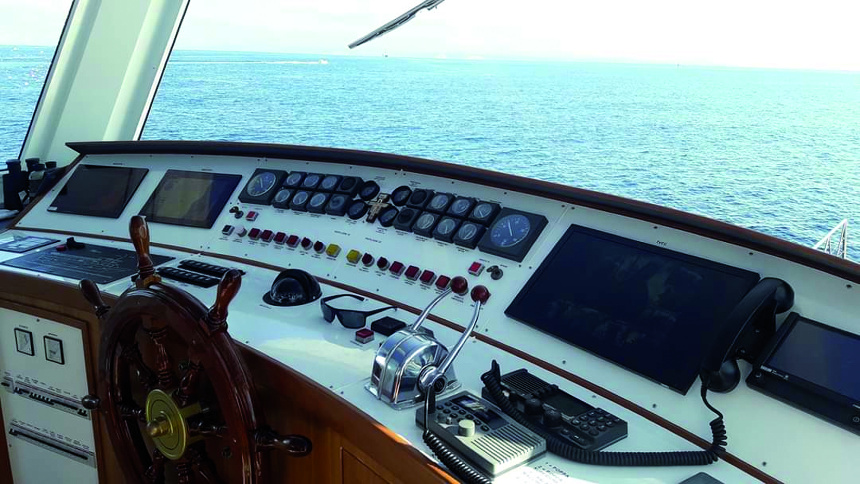 Uragano I° also features a newer, more spacious wheelhouse with a single-pane reverse windscreen that not only provides improved visibility, but also ensures greater protection from the glare of the sun. The wheelhouse also has a mahogany worktop and dashboard with white aluminium panels. Behind the dashboard, a chartplotting table and a sofa bed have been installed.

Although Consorzio delle Bocche said the refitting of Uragano I° had actually fallen a few weeks behind schedule due to the Covid-19 pandemic, the company claims that the necessary works were nonetheless completed well before the vessel’s intended commencement of sailing trips off Santa Teresa Gallura in the first half of July. The operator further remarks that the tour boat is now close to completing its first ever summer sailing period after being rebuilt.