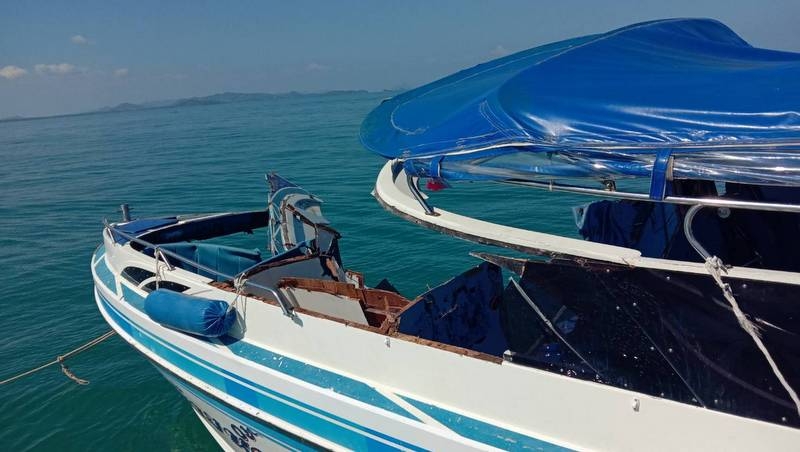 The captain of a Thai tour boat faces a criminal charge of recklessness resulting in injury as well as suspension of his operator’s licence after his vessel struck an oil tanker off Phuket earlier in the month.

The incident occurred on February 9 when the tour boat Sainam, which was traveling at a rather high rate of speed, collided with a small oil tanker off Koh Rang.

The resulting impact left the tour boat severely damaged and the captain and two passengers injured.

The 11 passengers at the time of the incident were all Chinese nationals and included a pregnant woman and four children aged six through 16.

All 11 passengers including the two injured individuals, who spent four days recuperating in hospital, have already flown home to China, Phuket City’s chief of police has confirmed.

The tour boat’s captain, whom the Phuket City Police has identified as 21-year-old Apichart Rakkarndee, suffered a broken leg and remains in hospital.

Mr Apichart claims the incident was caused by a problem with the engines that in turn affected the boat’s steering.

Police investigators have recommended the filing of the charge of recklessness causing injury to others, which Mr Apichart denies.

The Phuket Marine Office has stated that it will suspend Mr Apichart’s boat operator’s licence after having deemed his actions as clearly having no regard for other people’s safety.

The suspension could have a maximum duration of two years, the marine office’s acting chief said in a statement.

The boat has also since been de-registered, making it illegal for anyone to operate unless the marine office formally declares otherwise.