FEATURE: The village of the cruisers

Written by Alan Haig-Brown on November 27, 2017. Posted in Maritime Tourism. 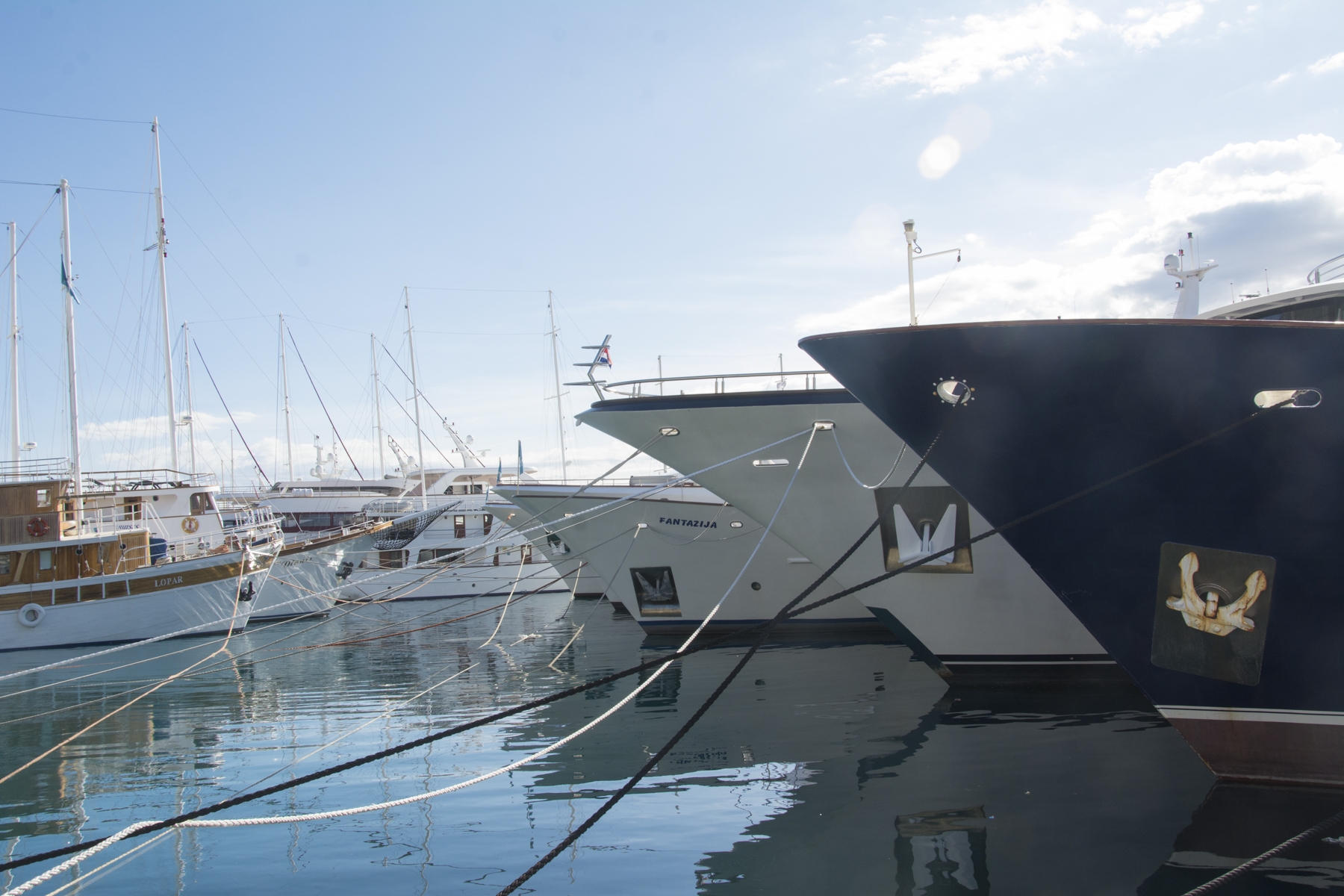 Driving south on the coastal highway from the ancient city of Split in Croatia in late October, one is amazed to come on a forest of masts. These are not your usual yacht masts lined in orderly rows in a marina, they are masts of all shapes and they are supported by a range of what at first appear to be spectacularly well maintained mega-yachts. A few are classic, bright finished wood but bold, white, steel-hulled ships with cruise ship style raked bows predominate.

On the shore, two rows of houses cluster at the base of a mountain making the sea of ships filling the harbour all the more dramatic. This is Krilo Jesenice, long the home of mariners noted for their fleet of sand hauling vessels, but in recent decades, home to an ever-expanding fleet of coastal cruising ships for the burgeoning Croatian tourist industry.

There is no shortage of rock along the coast of Croatia but fine sand for concrete and mortar has long been a valuable commodity. A prime source was the Cetina River, about ten kilometres down the coast from Krilo Jesenice. But hauling sand was incredibly hard work and it didn’t pay well. About 30 years ago, Duje Mladin’s grandfather added a few simple cabins to his sand boat and took some tourists for a boat ride. The next year they brought friends.

Soon, Duje’s father, Ivan Mladin, got a larger wooden boat on which he could accommodate a dozen people in cabins and make longer voyages along the coast. Others were doing the same and, by the early 2000s the Croatian tourist industry was growing rapidly and the families of Krilo Jesenice were growing with it. As business expanded, the families enlarged their fleet with larger more modern vessels

Croatian regulations limit the total number of passengers on this type of coastal cruisers to 36 and boats with 18 double berth cabins became the standard. In the early 1980s, Duje’s father, although still a teenager, began working on the sand boats, but soon he bought a fishing trawler and worked that for several years. Seeing the growth of tourism in the 1990s he bought a 16-metre boat that could haul up to six passengers. His first group of tourists spread the word and more came the next year. He supplemented this by hauling newspapers to the islands. Soon he moved up to a 22-metre wooden boat with 14 cabins for 28 passengers. He then traded up again to a 36-passenger wooden boat. It was these two boats that Duje recalls spending his childhood summers on.

Finally, in 2015, the Mladin family made the move to a modern steel hulled twin-engine luxury cruiser. This 43 by 8.5-metre boat would be as up-to-date as any on the coast. As do most of the families in the village, they had the shipyard build only the bare hull and superstructure and deliver it to their village port with only the engines installed. Then, in the winter months they hired all the subcontractors to complete the interiors to a very high level. The result is of a quality comparable to a luxury yacht. In addition to the 18 double-occupancy cabins, there is accommodation for eight crew including two chefs, two waiters, two sailors, a maid and the captain.

Working with a naval architect, the family brought all of their years of experience on the Adriatic to design a hull with a good solid 2.3-metre draft and a hull shape suited for the vessel’s function. At the same time they gave it shape from the beautifully raked bow to the deak decked swim grid aft. The quality of the wood joinery is exceptional and brings all the warmth and tradition of the wooden vessels while providing the longevity and finely faired finish of a steel hull.

Careful thought also went into the selection of the engines that form the heart of the vessel. For main engines, they selected a pair of Cummins QSM11 marine diesels each rated for 265kW each at 1,800rpm. The provides ample and economical power to give the big vessel a maximum speed of 11.5 knots and a comfortable cruising speed of 9.5 knots while burning, including the genset, about 60 litres per hour. The engines turn propellers through Dong gears with 4:1 reduction.

As tourist boats, the week-long voyages do almost all travel by day and then moor in various ports along the way. A good many ports have shore power but in the event that they do not, or when anchored in an isolated bay, the hotel needs of the vessels are met by a pair of Cummins ONAN MDKDU 27kW generator sets. While underway 35kW shaft generators provide electrical power for the vessel. On the Aquamarine an additional 90kW generator provides power for the anchor winch and a 50kW bow thruster.

The combination of owner input in the design and build process earned the Admiral complete satisfaction from both guests and operators. When a second vessel, the Aquamarine, was started in 2016, they made it an exact sister ship. From bow to stern and wheelhouse to engine room there were virtually no changes. After commissioning in June of 2017 the Aquamarine, with Duje as captain, put in a productive and profitable summer season alongside the Admiral.

Bookings for the ships are handled by agencies and they are already full for the 2018 season. If a single group takes the whole ship, they can customise the voyage schedule with the captain. Guests are picked up in Split on a Saturday morning and the voyage can go north toward Zadar or south toward Dubrovnik.

Over the winter of 2017-18 there are reportedly more than 15 additional boats being added to the Croatian fleet including at least one in Krilo Jesencie. In most cases, as with the Admiral and the Aquamarine, owners who had the courage to convert work boats to tourist boats, will continue to do all of the finishing along-side in their increasingly crowded home port. Among maritime success stories this ranks with the best.