Written by Baird Maritime on February 24, 2017. Posted in Maritime Tourism.

Visitors to Thailand, like the Thai people themselves, invariably comment on the diversity and complexity of Thai food. It is the result of many centuries of refinement and a dedication to fresh ingredients. From the beach restaurants of Phuket to the riverside restaurants of Bangkok, the food is a great national theme.

One of the favoured restaurants for traditional Thai food is Baan Khanitha, with four unique locations around Bangkok. The restaurants are named for the owner, a former Thai silk fashion designer, Khun Kanitha Akaranitikul. The name means literally, “the home of Khanitha”, and each is designed with that personal touch. 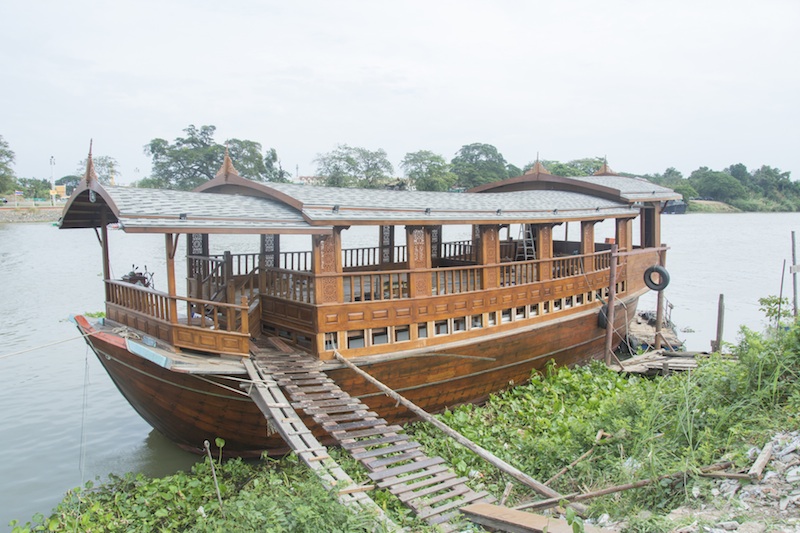 Much as Khun Khanitha enjoys her restaurant homes, she has longed to properly express her love of the Chao Phraya River that flows from the ancient capital of Ayudhaya and winds through the city. With the addition of Baan Khanitha Cruise she will have achieved her goal to give dinners an opportunity to take a leisurely cruise through the city while dining on board. 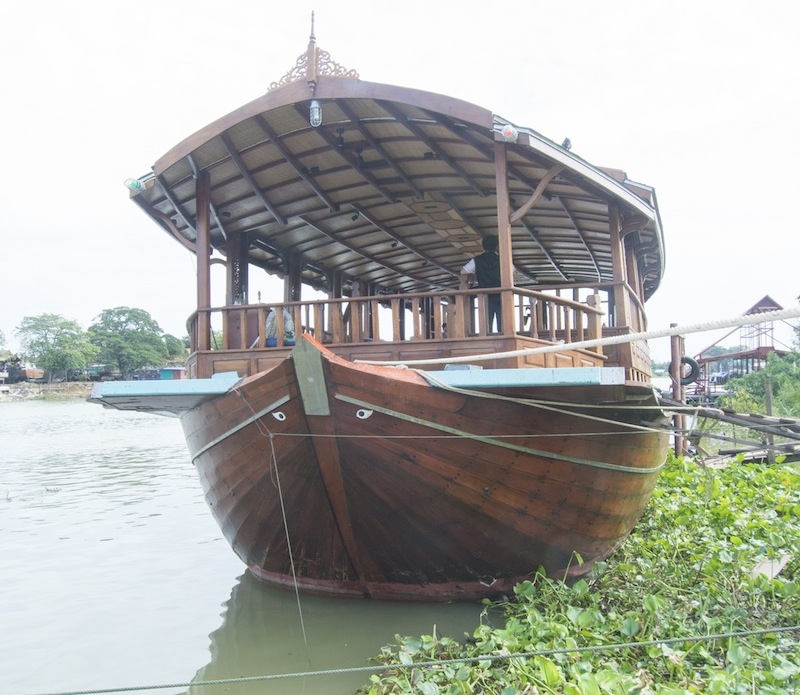 The river already has a number of huge dinner boats that take bus loads of tour groups on the river for a quick meal and tour. Khun Khanitha, wanting to replicate the fine dinning experience of her restaurants, decided on something quite different. In days gone by the Chao Phraya River was filled with beautifully shaped teak-wood rice barges. Some of these have had engines installed and operate as tour boats. 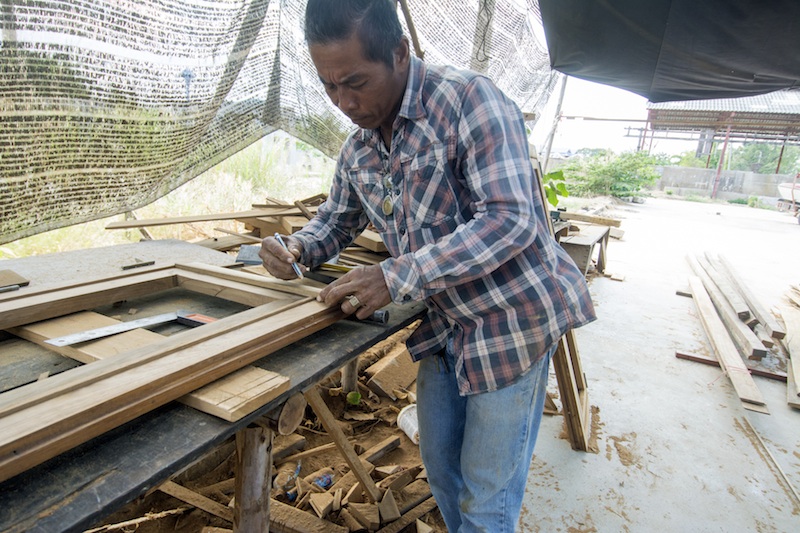 Khun Khanitha found one of these and had it taken up the river to Ayudhaya, where some of the best wood workers reside. She wanted the Thai tradition of teak elegance but she also wanted a state-of-the-art kitchen for her chefs. To do this, it was necessary to raise the main deck to make room in the hull for the stainless steel kitchen. Teak has become a rare commodity, but the shipwrights scoured the area for old houses and other sources of timbers that they carefully re-sawed and shaped into the desired dimensions for fabricating every thing from doors to window frames. 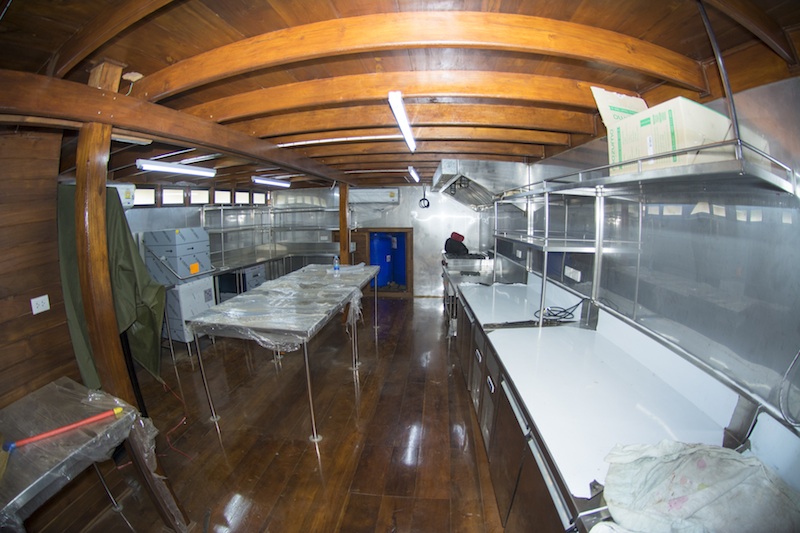 In melding the tradition of fine Thai food and fine teak woodwork, Khun Khanitha is creating a spectacular experience for visiting and local dinners. But when it comes to the kitchen, she has departed from the old time tradition of charcoal cooking in favour of modern gas fired cookers. For maintaining the freshness of the food she has a bank of coolers, she has installed two dish washers, one for plates and the other for glasses and stem ware. To keep the wine for the stem ware at just the right temperature the kitchen has a wine cooler. Intake and exhaust blowers along with air-conditioning will keep the below deck kitchen fresh for the kitchen crew. 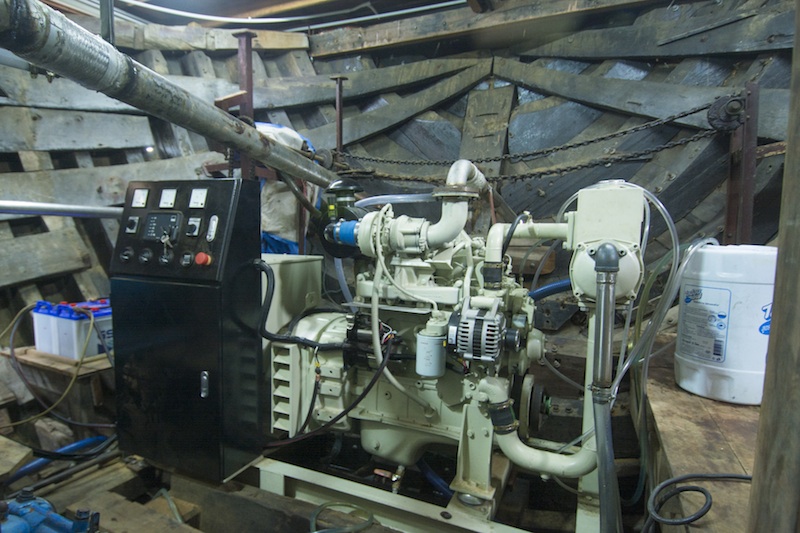 As a sightseeing boat, the teak barge required only a propulsion engine and a small generator. Now, with the extensively equipped modern kitchen there was a need for much more electrical power. To be assured of a reliable source for this Khun Khanitha set the boat up with a Cummins 4BTA 3.9-litre generator engine powering a 30kW Stamford generator. This will provide ample power for the kitchen but also for the vessel’s lighting and entertainment systems. A factory supplied control panel, located at the engine, provides key start, emergency shut down and a full set of relevant gauges. 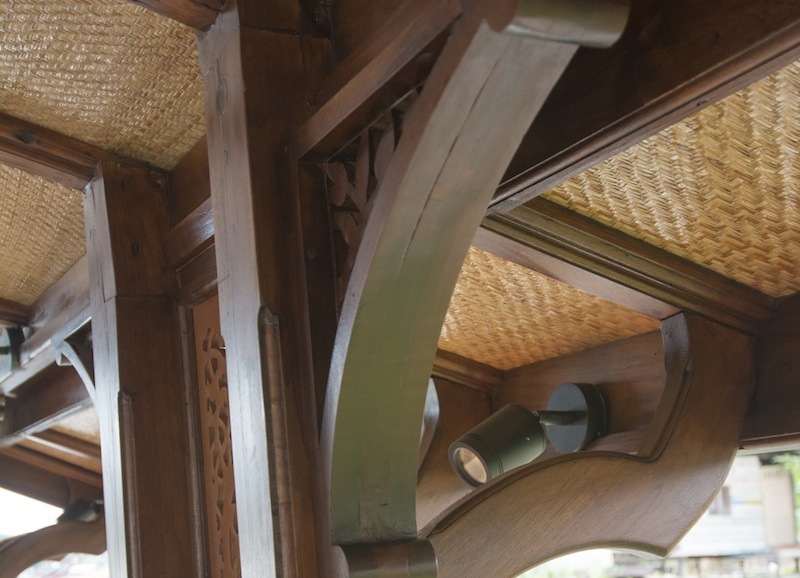 As a fully equipped floating restaurant set on a brightly finished teak hull, the Baan Khanitha Cruise will represent an exciting addition to water-borne traffic on the Chao Phraya River.