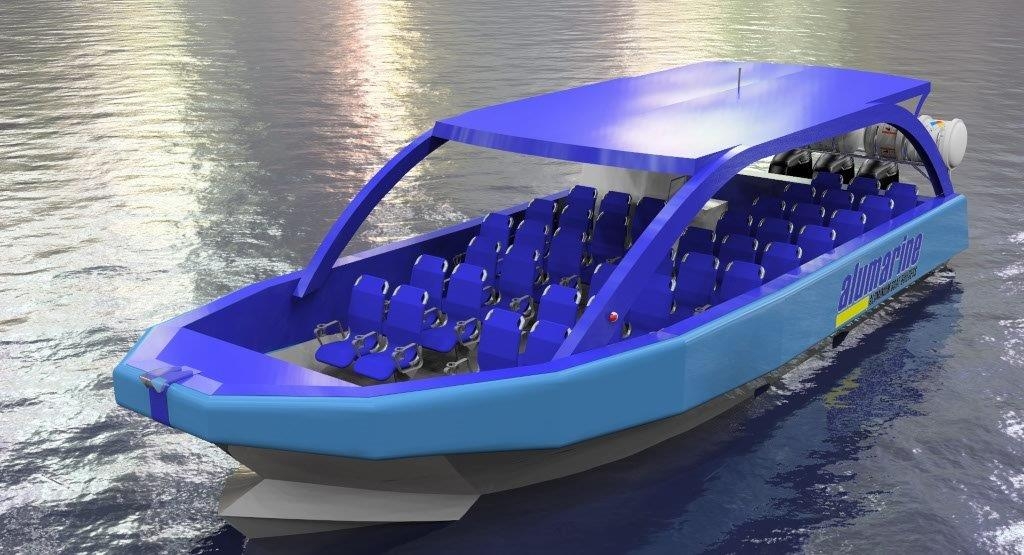 After seeing some government tenders in Australia like the Melbourne Fire Brigade boat and some parts of the recent Victorian Water Police order going to international suppliers due to a lack of suitable domestic products, Alumarine, in conjunction with Chris Tucker Marine Design has developed a new range of patrol/rescue boats.

The new designs all feature Alumarine’s signature “Z bow” and eye to practicality, and like their recent launch for Refuge Cove Cruises, are built to the limit of what a coxswain can legally drive.  However, readers familiar with Chris Tucker’s work will instantly recognise these vessels as coming off his drawing board. Both boats feature his oversize encapsulated foam fenders, numerous grab rails, and on the monohull version, his highly developed stepped hull geometry.

In their “spec” version both designs feature outboard engines, again allowing operation by a coxswain but also allowing cost effective installation of dynamic positioning and joystick based control systems, and rapid replacement in the event of engine failure.

Inboards options are available and depending on target speeds Alumarine says the vessels would work well with either water jets or heavy duty Konrad-style stern legs. Either option would free up transom space for a large boarding platform, easier towing or perhaps carrying a small tender. 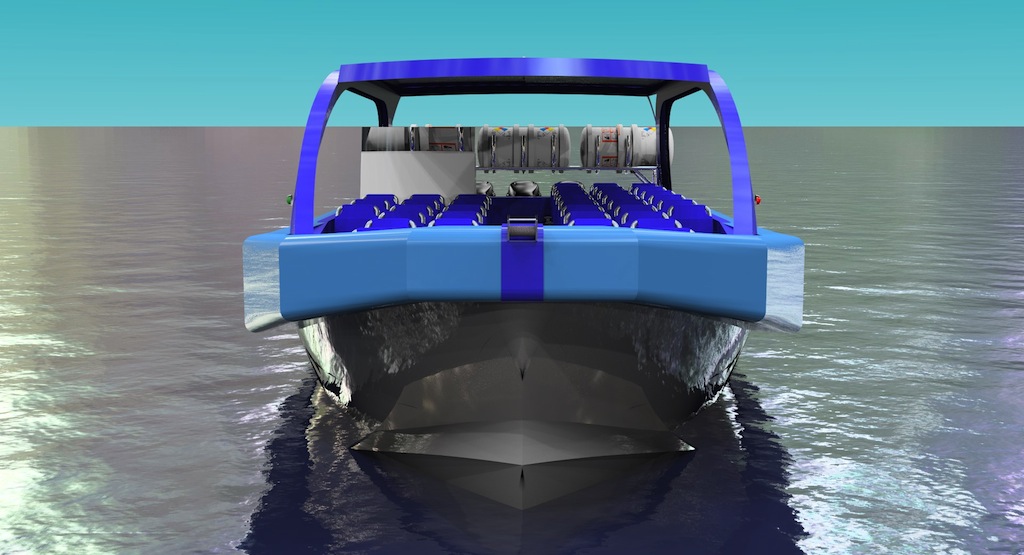 The floodlit cockpits feature heavy duty sampson posts with quick release hooks for towing. On the catamaran a rope storage winch is located in the structural box at the base of the post. On the monohull version this same winch has been placed in a dedicated under floor locker so as not impact on useful deck area.

Other cockpit features include fold down seating, large (stretcher friendly) boarding doors to both sides and the option of a secondary helm location for use during short handed docking and towing operations.

Cabin styling is interchangeable between the two options. In the renderings the catamaran shows wide eves, ideal for keeping the harsh Australian sun off the windows, however an angle overhead window option ideal for working alongside bigger vessels, rigs and wharfs is also available.

Both cabins have been kept as narrow as practical to allow safe recessed walkways down the sides of the vessel. These walkways extend up side stairs to foredecks which have been kept as open as possible with recessed anchor handling gear and a choice of 1,000mm, 600mm or inset pilot boat style grab rails with life line tracks.

Like much of the boat’s details, the interior layout can be tailored to suit. Both boats currently feature Shoxs military grade helm and nav chairs along with side coaming mounted jump seats which fold down to form a stretcher and a large removable chart/control table with fixed seating, dedicated radios, computer power sockets and dedicated plotter.

The floors include clear space big enough for a standard stretcher (with tie down points) and the ceiling has CTMD standard full length grab rails, white and coloured LED lighting and a retractable black out screen around the helm and nav station allowing safe operation when full light is needed in the rest of the cabin. Forward both vessels feature gear lockers, galley space, enclosed bathroom with hot and cold shower and bunk space for crew or rescued passengers. 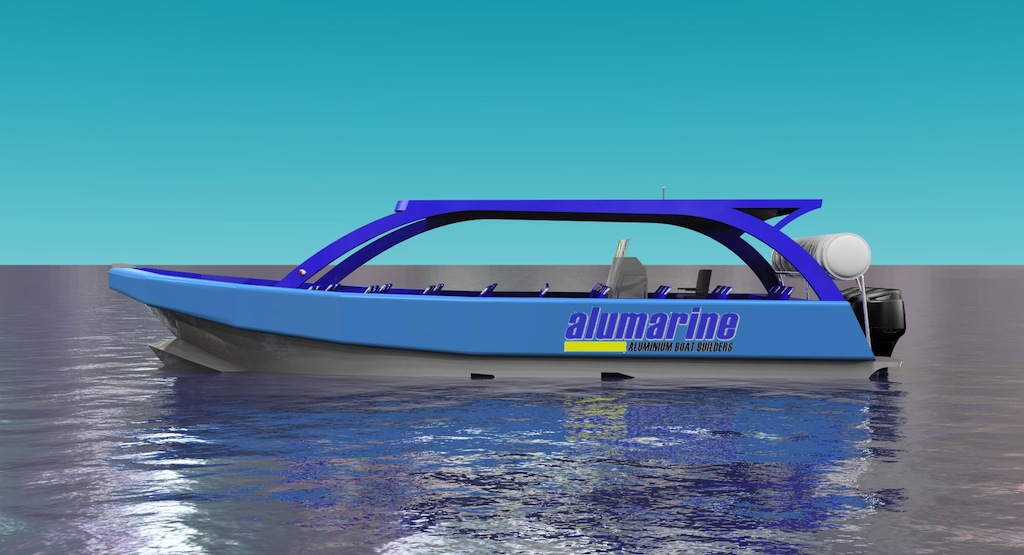 Layout aside it is the engineering and naval architecture that will likely set these boats apart. When used on a planning hull like Alumarine’s new RHIBs  the “Z bow” allows the builder/designer to fine up the vessel’s entry to provide a smoother ride without sacrificing the necessary volume forward to ensure a safe ride.

The stepped hull as seen on CTMD designs as small as 6.1 metres has similar benefits. It allows the boat to perform like a wide flat bottom vessel while still maintaining higher than average deadrise resulting in a soft fast efficient ride.

At the conclusion of the initial patrol boat variants and upon showing the drawings to a range of existing clients and interested parties it quickly became apparent that the boats (particularly the monohull) would also be a very viable option in the adventure tourism market. A tourism version was then produced which draws upon Alumarine’s experience in this market segment.

Within the Australian National Standard for Commercial Vessels (NSCV) system, buoyancy collars allow the use of lower freeboard, making the boats smaller and more cost effective to run while also offering the additional thrill to the passenger of being closer to the water.

The use of the custom segmented encapsulated foam fenders on the CTMD/Alumarine version of this style of boat means that boarding door locations and styles can be easily tailored to suit the end needs of the user. If necessary, in the event of the boat changing hands, they can be modified or moved without the need to replace the entire fender, making the boat future proof or easier to sell if the operator’s needs should change.