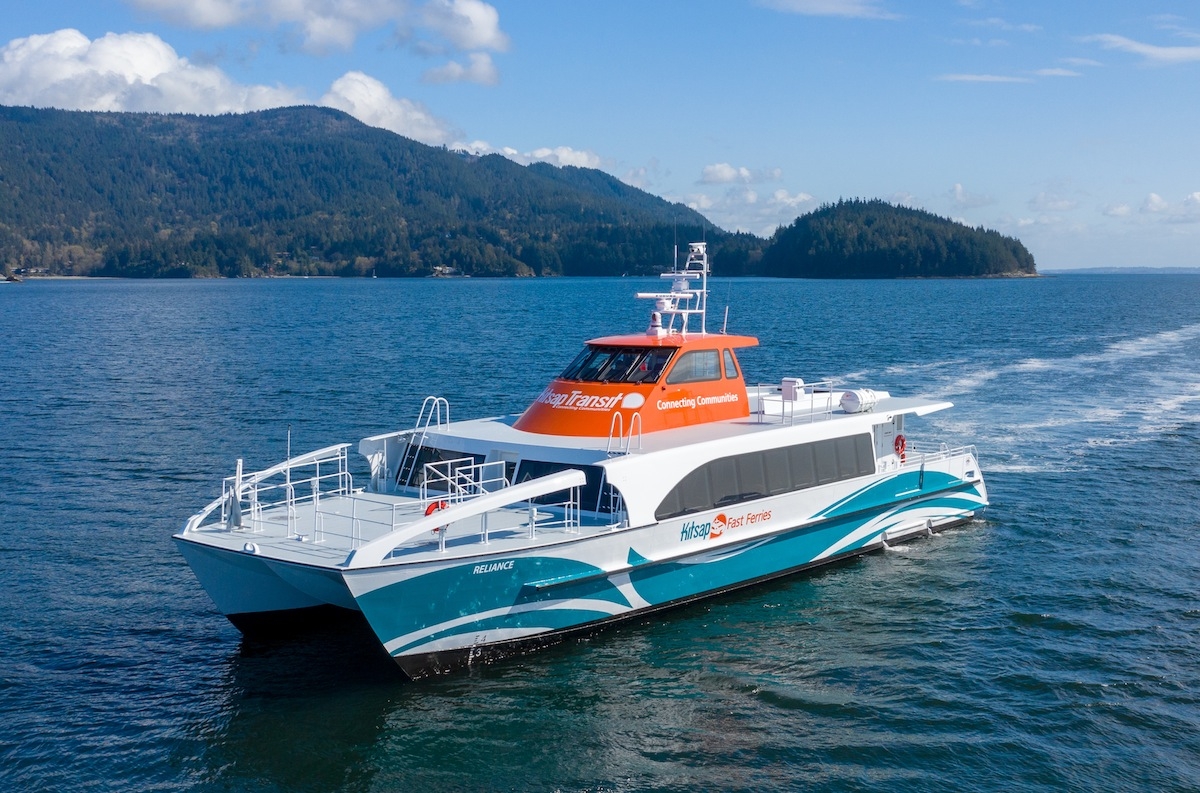 The second of three low wake, high-speed passenger vessels for Kitsap Transit, the Reliance, was launched on March 6 and has been undergoing sea trials and wake-wash testing.

Kitsap Transit had been searching for an economically feasible solution to bring fast and environmentally safe passenger-only ferry service back to the Kitsap Peninsula since Washington State Ferries was forced to terminate their service in 2003.

With the population and subsequent housing cost increases in Seattle, commuters are looking for new ways to get to work downtown faster, without driving. People can take advantage of the lower housing costs in Bremerton, while also staying in the Seattle job market. This high-speed ferry service allows them to do just that.

Ferries on the Bremerton-Seattle route must pass through Rich Passage, a narrow mile-long passage (roughly 2,600 feet or 800 metres wide at its narrowest point) between the Kitsap Peninsula and the southern end of Bainbridge Island.

Previously, Washington State Ferries (WSF) passenger ferries had been forced to slow to 12 knots while in Rich Passage, to reduce wake and erosion, but drastically increasing the commute time. Residents along Rich Passage even won a class action suit against the state seeking compensation for damage done to their properties by the high wakes caused by the ferries.

Through a series of federally-funded wake wash studies, the wake signature of a hydrofoil-assisted Teknicraft Design catamaran produced the least amount of wake wash energy within its tested vessel class.

Kitsap Transit contracted with Pacific International Engineering of Edmonds, Washington, to spearhead the ongoing research efforts in conjunction with Teknicraft Design to further enhance and optimise the vessel’s design.

Teknicraft worked with hydrodynamicists from the University of Iowa’s IIHR-Hydroscience and Engineering Research Center as well as naval architects from INSEAN in Rome, Italy to model an ultra-low wake hull.

The computational fluid dynamic analysis focused on optimising the hullshape and foil system in relation to minimum wake energy and maximum lift to drag ratio. Hull and foil interaction, as well as foil profiles, foil location and angle of attack were studied to create a system that produced optimum results.

Coastal specialists from Golder Associates of Redmond also evaluated the proposed vessel’s performance in terms of wake generation and resistance. 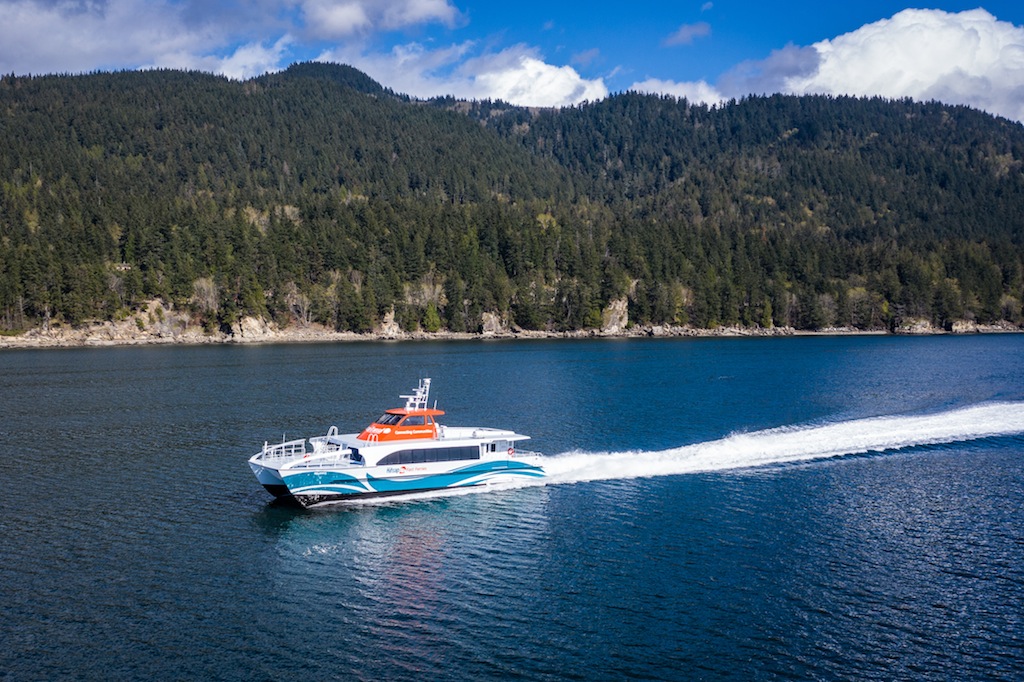 The design of the new vessel was based upon the successful ultra-low-wake Rich Passage 1, built in 2011. Reliance will also carry 118 passengers and has registered a service speed of 37 knots. The addition of air-conditioning units and an improved HVAC system will improve airflow to help reduce cabin temperatures during the summer.

Reliance was strictly modelled on the proven hull design, but additional enhancements and modernisations were added without hampering performance.

Complementing the hull design, the ferry also features “smart” technology for wake wash mitigation. The Naiad control systems for the adjustable composite hydrofoil and wake mitigating interceptors have been integrated with GPS technology to automatically position the foil and interceptors for the lowest wake energy signature when the vessel enters wake-sensitive coastal areas.

The system will also make adjustments for optimising performance and fuel efficiency when wake mitigation is not the critical operation. The adjustable hydrofoil can be manipulated intentionally through minor adjustments to optimise speed without increasing engine rpm or fuel consumption. The adjustable foil is highly beneficial for commuter ferry applications where the passenger load may be heavier in one direction than the other.

The hull form is a semi-planing type catamaran and employs a combination of symmetrical and asymmetrical sponson shapes, thereby combining the attributes of both shapes into one hull. The symmetrical bow-section ensures directional stability in rough conditions, while the asymmetrical midship and aft sections ensure softness of ride and reduce the wetted area, enhancing comfort and fuel economy, as well as decreasing wake energy. 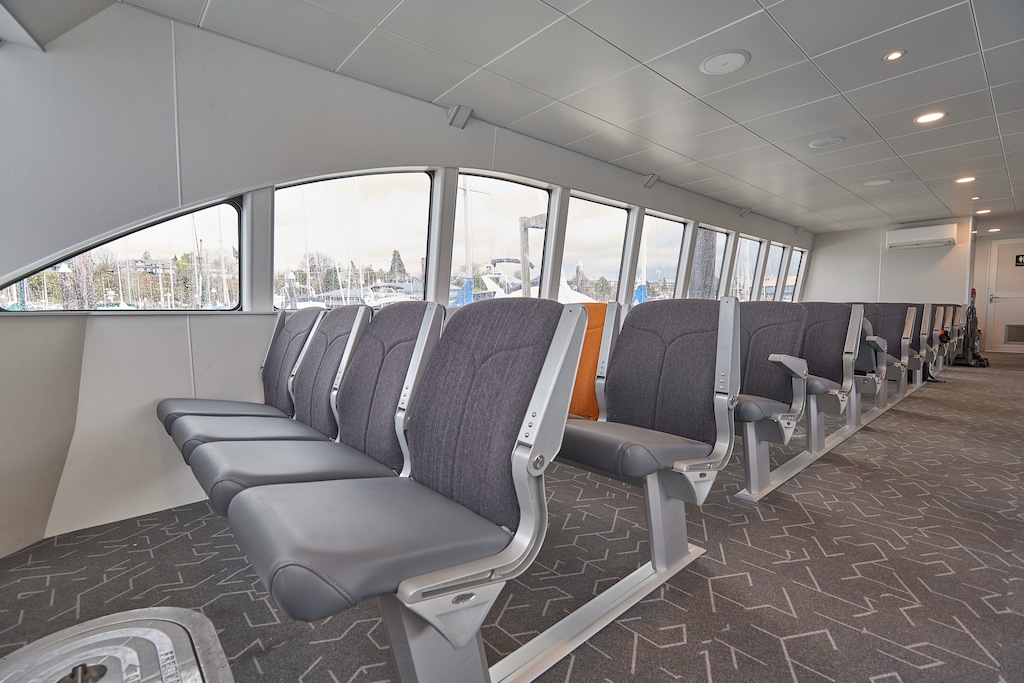 The hulls were constructed with high tensile strength 5383 aluminium alloy while the passenger cabin and deck were made from composites to reduce weight and to enhance the exterior styling and visual effect.

The composite construction consists of a sandwich layer comprising of thin E-glass outer layers, reinforced with carbon fibre in highly stressed areas, and a high-density structural foam core between the fibreglass layers.

The dynamic hydrofoil was moulded in carbon fibre and automatically adjusts as the vessel transits Rich Passage. 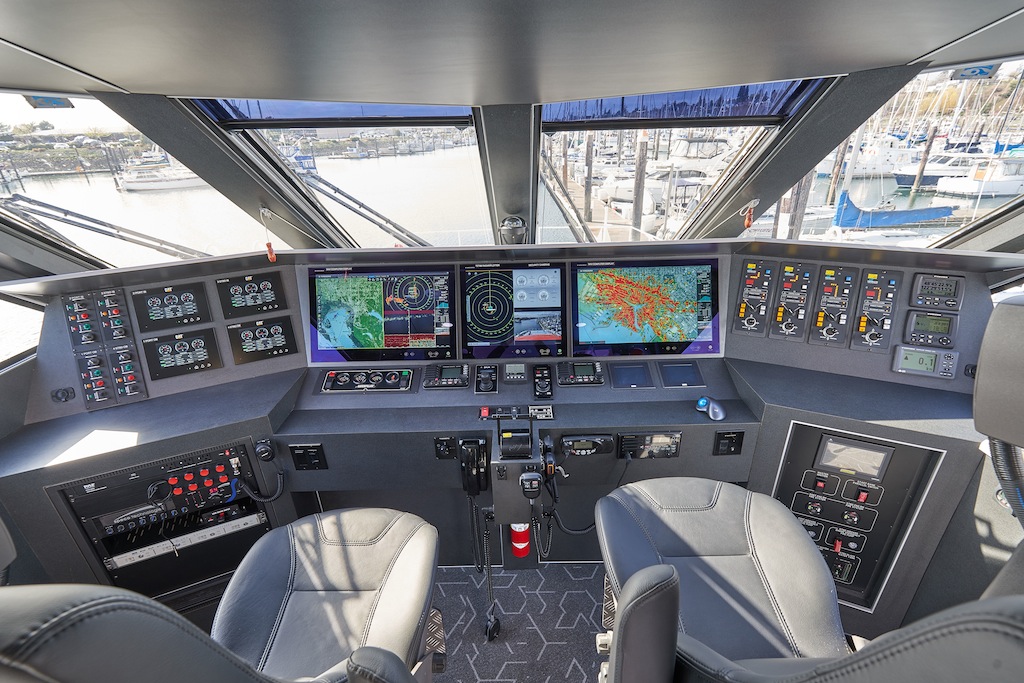 Quad Hamilton 403 water jets and Caterpillar C18 engines were fitted to provide a high-powered propulsion system in compliance with EPA Tier III emission regulations. The ferry carries 800 gallons (3,000 litres) of fuel. During test periods and in a light laden condition, the crew observed the vessel capable of speeds in excess of 45 knots.

The successful launch of Reliance will provide Kitsap Transit with a back-up vessel on the Bremerton-Seattle route. A third sister ship vessel, Lady Swift, is currently under construction and will launch in summer 2019. 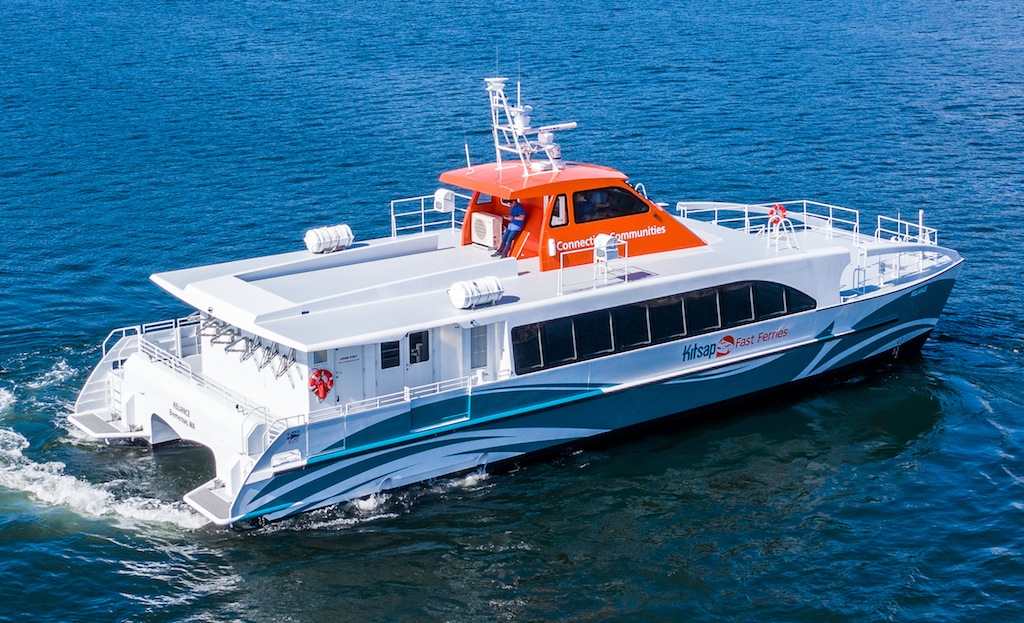 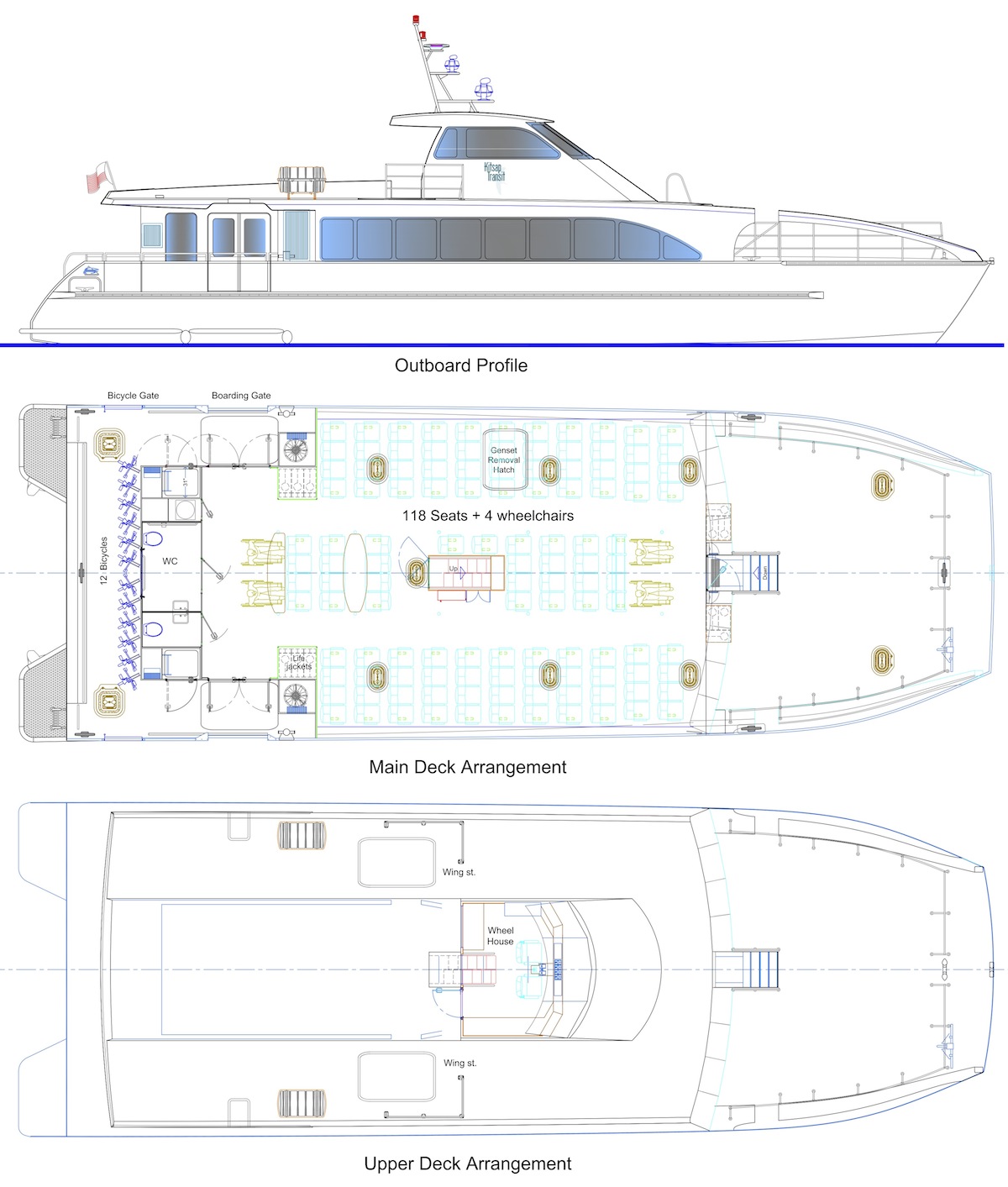