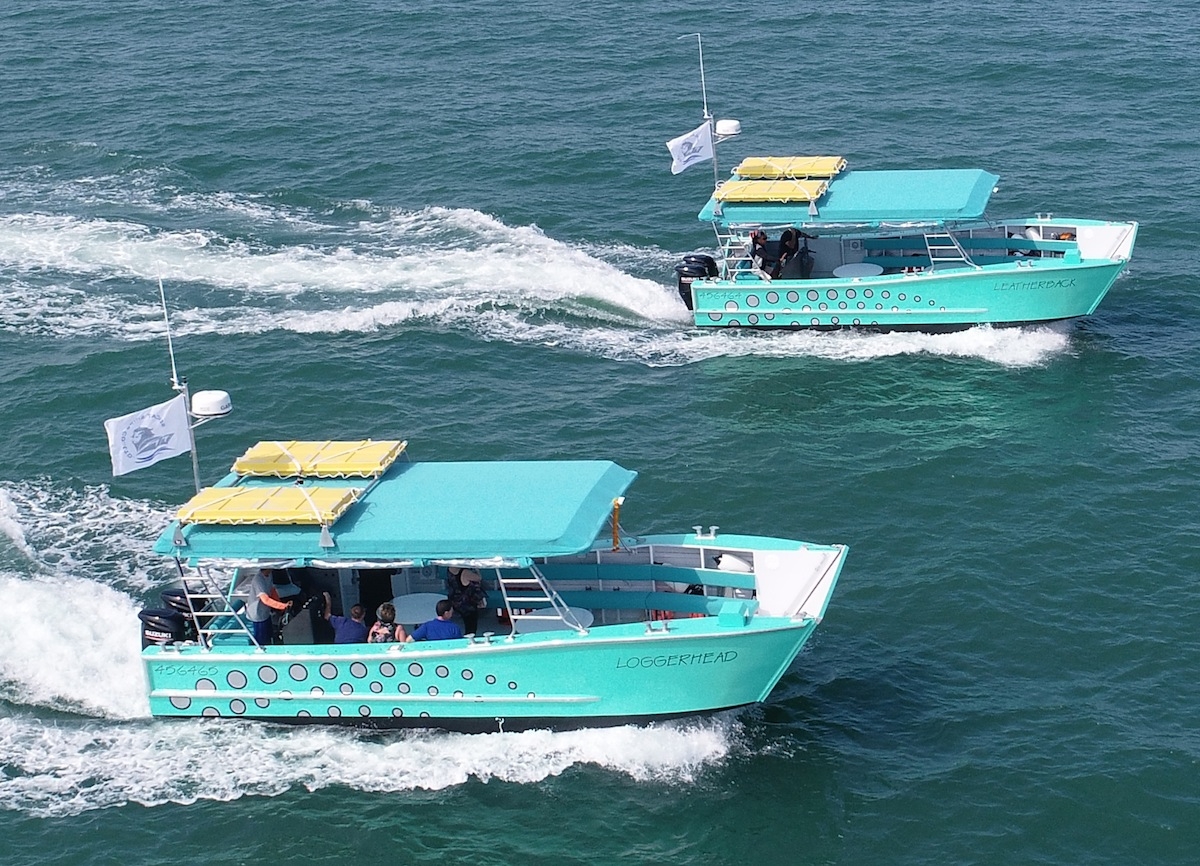 The team at SeaCat Ships has delivered a pair of 8.8-metre landing craft to Hamilton Island on Australia’s Great Barrier Reef. The vessels were disassembled to fit into a 40-foot container for shipping.

These aluminium craft will run daytrips to White Haven Beach and various other charter operations. The brief was that the vessels would meet the larger transfer ferry coming from the mainland and unload passengers onto the two landing craft, as well as the necessary cargo (BBQ equipment, food and drinks) required for daytrips.

One of the main problems they will solve is freeing up the owner’s larger ferries for other operations/duties, as the new landing craft will take over this particular part of the route, which is much more cost effective.

They will allow safer and more efficient access to White Haven Beach, which is a national park and does not have any onshore facilities. The vessels are versatile enough to be used for day or night passenger transfers between the islands, as well as snorkeling and fishing trips.

The owners also required the vessels be low draught and be able to land on the beach comfortably as well as carry up to 30 passengers. In was also a requirement the vessels be in Australian Survey for Class 1D (passenger vessel operating in partially smooth waters.)

Named Loggerhead and Leatherback, after offshore turtles in the region they will be servicing, they are safe and cost-effective passenger tour vessels to a new design. 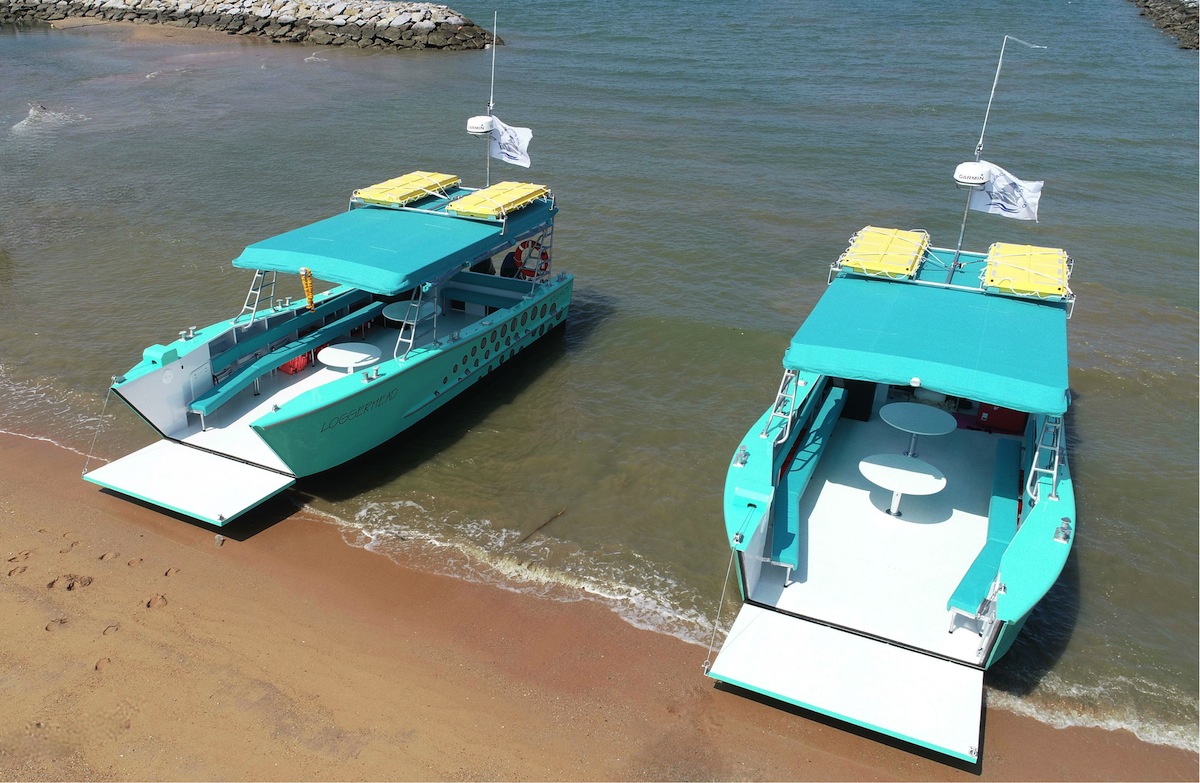 The design of these heavy duty, aluminium plate barge models is approved by the Australian commercial vessel standards, NSCV Class 1D. These are the third and fourth landing crafts of this series produced by SeaCat Ships, and are updated versions, with the capacity to hold 32 passengers, cushion seating, and two round centre seats, which are easily converted into raised dining tables.

The side panels were redesigned to give a nicer shape to suit the owner’s requirements, giving the vessels a more stylish appearance. SeaCat told Baird Maritime that for future builds of this type of landing craft, it would endeavor to use these redesigned side panels, as they produce a much better and stylish looking end product, unless the requirement is for a simple workboat application.

SeaCat also added four spray strakes to the bottom, which give the boats a more comfortable ride for passengers. This will also be used as the standard on all newbuilds of this model moving forward. 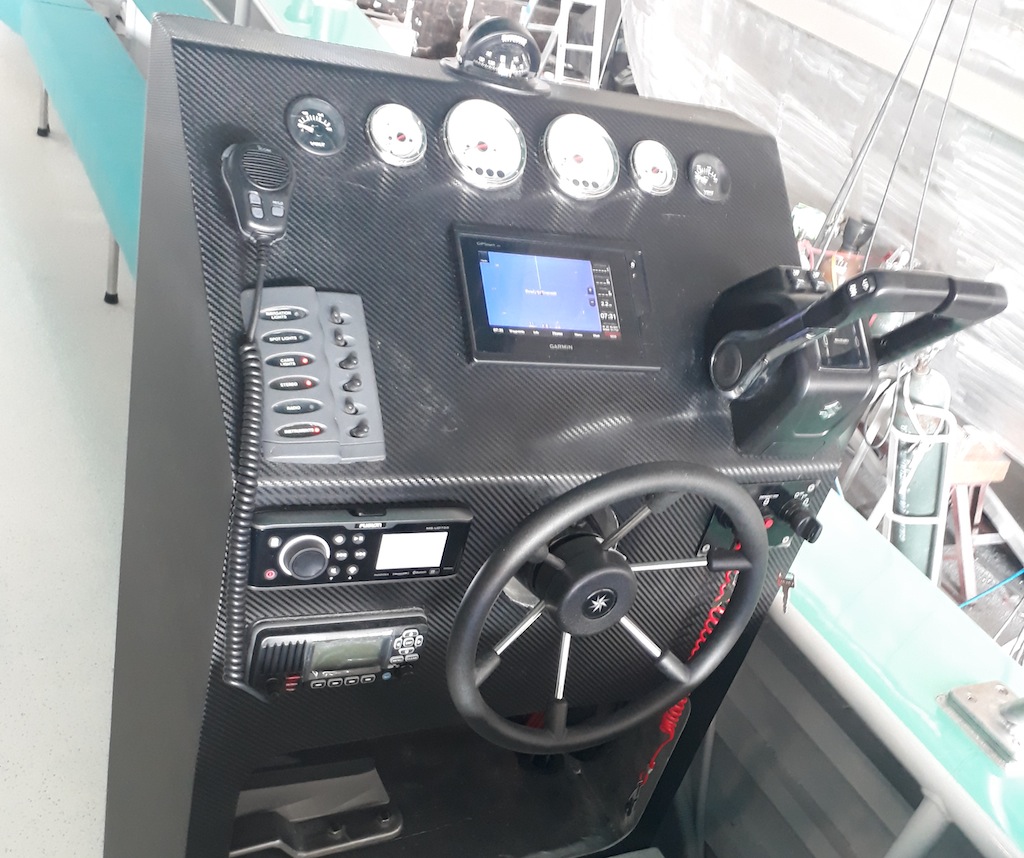 The vessels can operate without any shore-based facilities. For example, they do not require a jetty to load people/cargo on and off. You can simply drive the vessels up to the beach and lower the bow door and walk onto the beach.

The chosen electronics setup is a DC electrical system with three batteries (house bank) situated under the helm seat in a vented compartment, plus one battery forward for the winch. All the batteries are charged from the outboard engines. The vessel has spotlights, navigation lights and down lights for night time operation and a multi-function Simrad radarchart plotter/sounder as well as a VHF radio and fusion sound system/wireless PA.

The exterior hulls are coated with 3M vinyl wrap, using the owners colour scheme and artwork, which gives the vessels a very distinctive appearance. 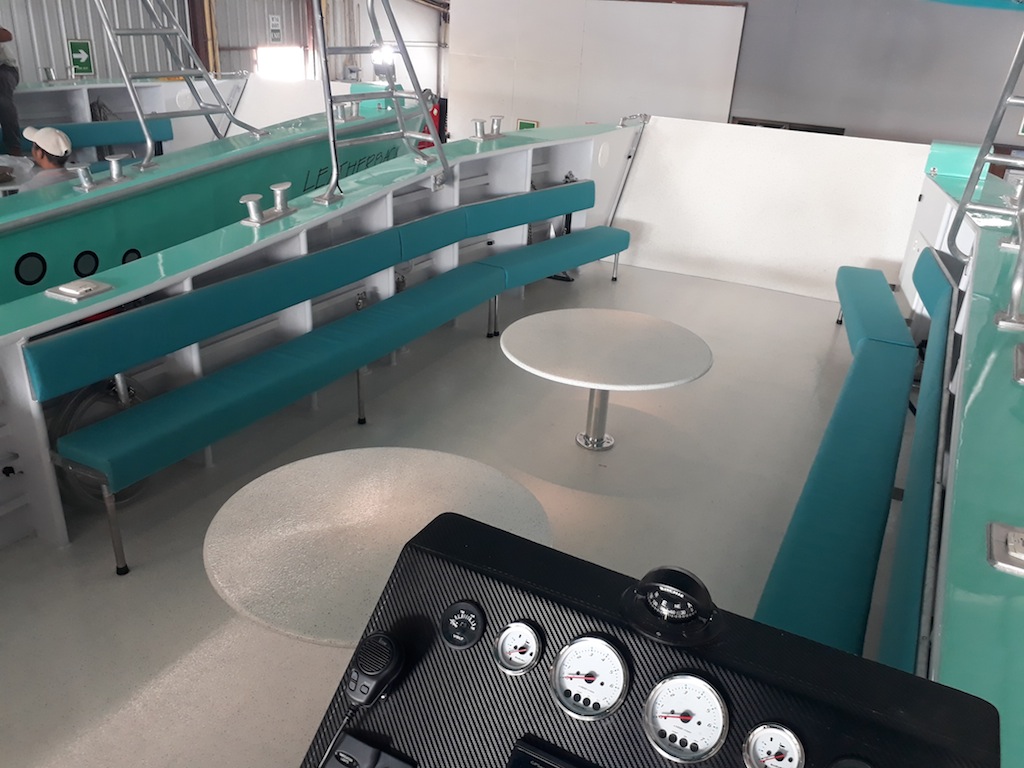 The deck setup comprises a raised helm position; cushioned, fold-down perimeter seating; and two rounded centre seats, which are easily converted to raised tables for onboard dining. The deck and tables are coated with designer flec, which gives a nice, clean, non-skid finish.

Two 20-man Karley floats are situated above the soft cover roof on an independent structure, secured by a hydrostatic release. The reasoning behind this is to avoid any holes or leakage in the soft cover roof, and it keeps the vessels clear of unnecessary obstructions.  The life jackets are also suspended under the roof in mesh fabric compartments for the same reason. 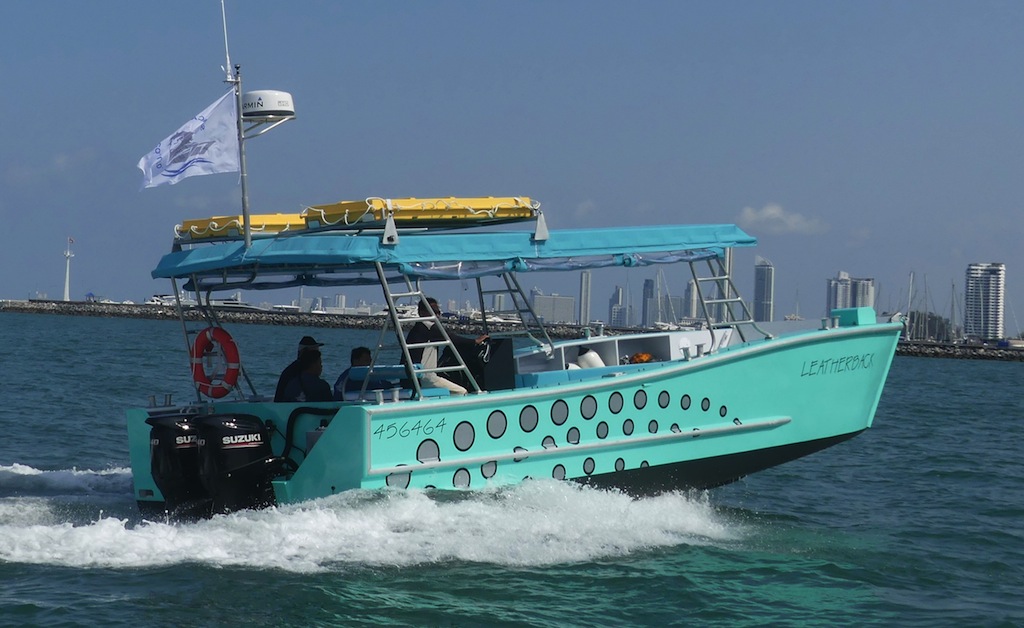 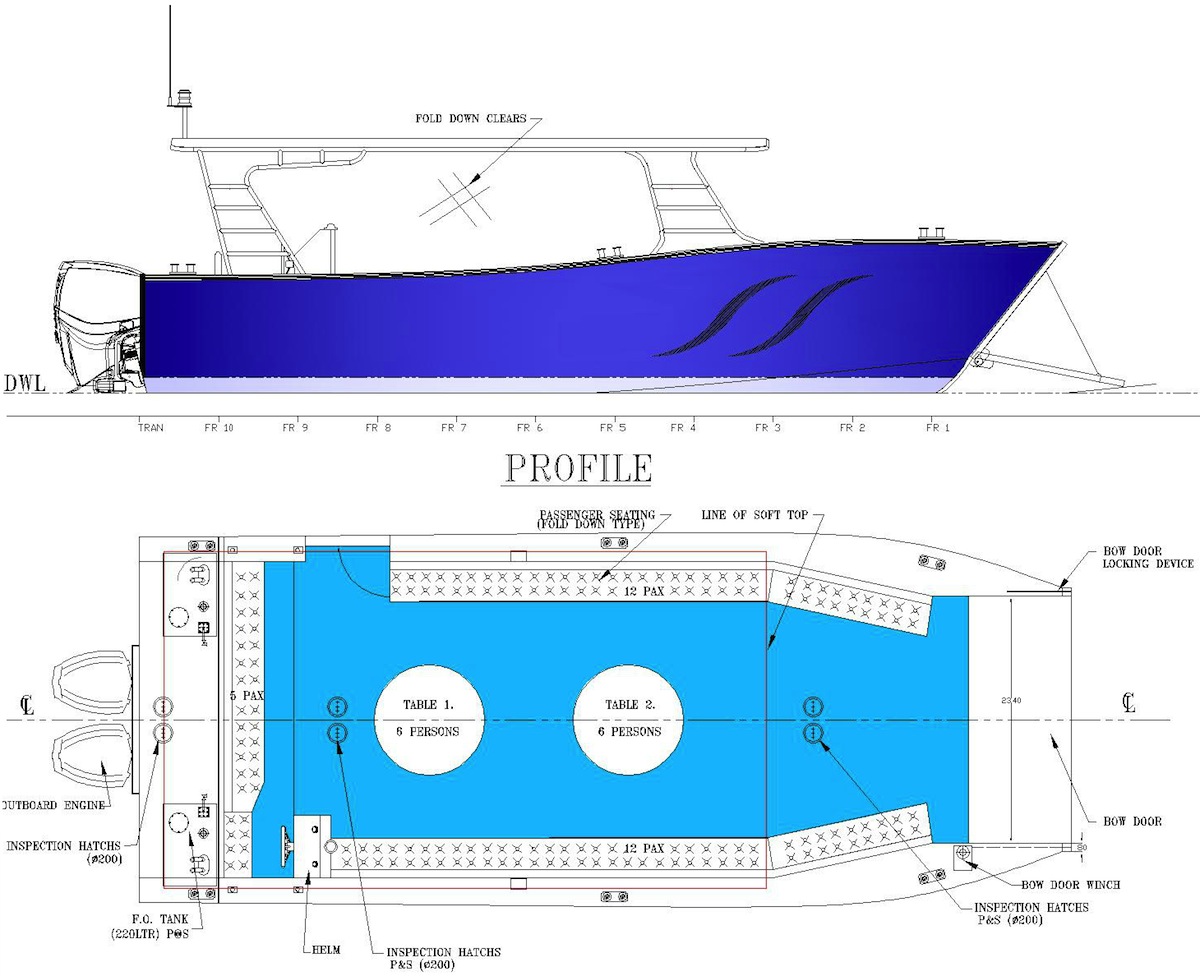