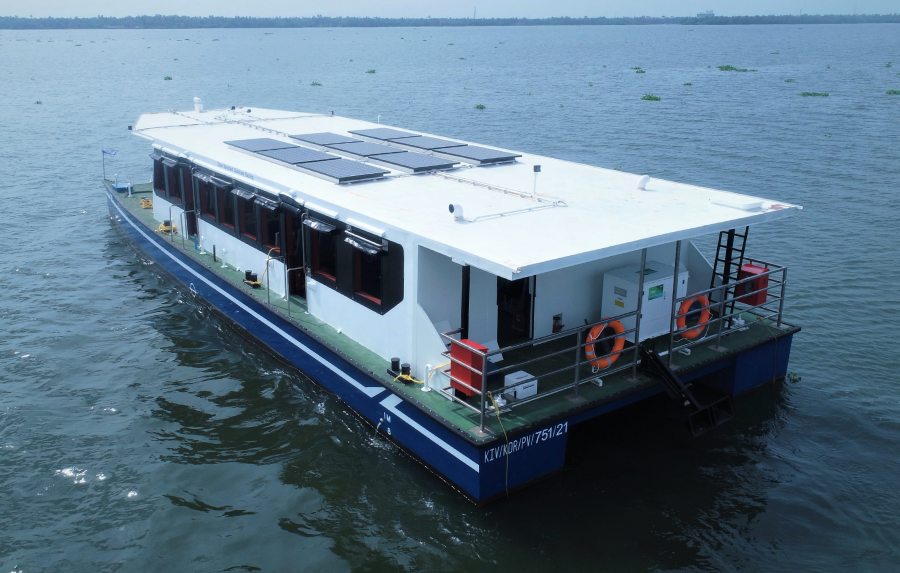 Kochi, India-based company Navgathi Marine Design and Constructions (NMDC) recently handed over a new commuter ferry to the government of Kerala state in the country’s south-west.

Classed by the Indian Register of Shipping, the catamaran belongs to a new series of vessels that are being developed to satisfy the requirement for energy-efficient water transportation through the use of an optimised low-maintenance hull design and a lithium-based energy storage system (ESS) connected to roof-mounted solar panels to supply power for the onboard electrical systems, including an electric steering system that eliminates the need for cumbersome hydraulic pumps, cylinders, and fluid.

The ferry will serve both regular commuters and tourists traveling between the town of Panavally and the remote island community of Perumpalam in Kerala. 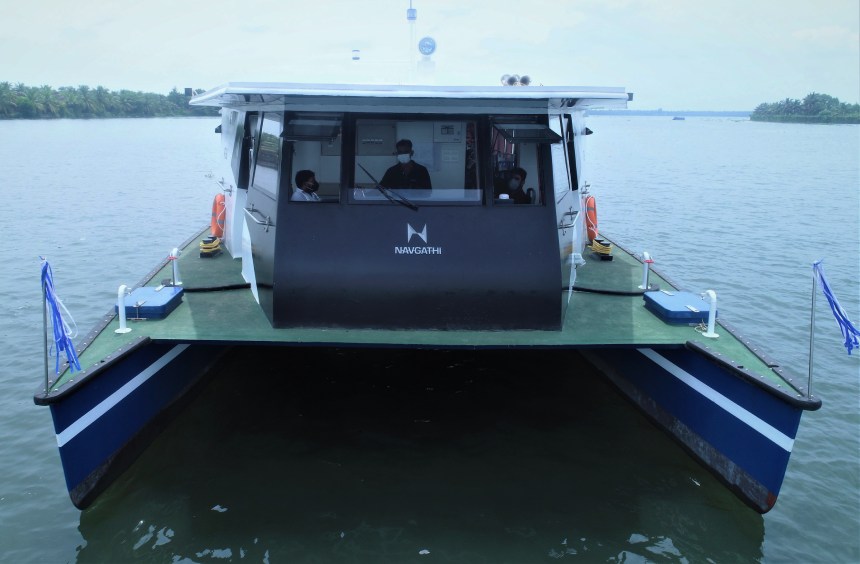 “We developed the ferry in fulfilment of a requirement by the Kerala State Water Transport Department for an energy-efficient passenger boat service that can still be operated amid steep hikes in fuel prices,” NMDC told Baird Maritime.

“Based on the current diesel price of INR95 (US$2.56) per litre,” NMDC explained, “the yearly operating cost of a steel- or wooden-hulled boat would be equivalent to US$52,667 while that of an FRP boat would be equivalent to US$28,267. For the new ferry, however, we estimate the yearly OPEX to be US$14,133, and this also includes energy cost and maintenance cost that is 10 per cent of fuel cost for lubes, filters, and overhaul.”

The selection of FRP for the construction was driven by the need to reduce OPEX by reducing total vessel displacement.

“We know the importance of energy efficiency,” added NMDC. “Therefore, we are investigating ways to make a fuel-efficient boat lighter without any loss in strength. The efficiently designed hull form with low drag and the right choice of materials helps in lowering resistance.”

The builder remarked that such attributes will yield benefits in fuel savings throughout the boat’s service life, which is estimated to last 20 years. 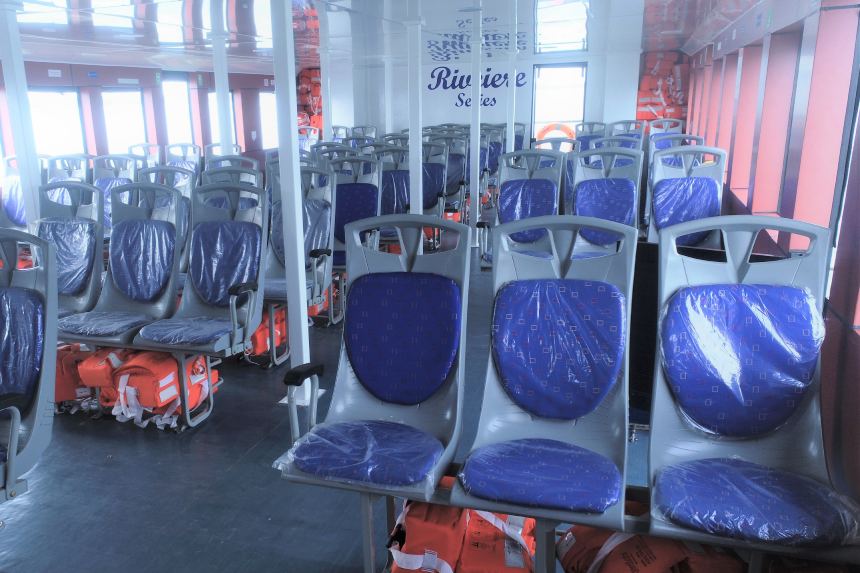 NMDC said the newbuilding project was somewhat hampered by the Covid-19 pandemic, particularly its impact on the sourcing of raw materials needed for the boat’s construction. Fortunately, the company’s in-house team was able to overcome these challenges “with proactive and practical approaches in planning and execution.” The work that went into the new ferry also provided the builder with lessons on integrating onboard electrical systems powered by clean sources of energy into its future projects.

Two Simpson S433 37kW engines drive three-bladed propellers via PRM 260D gearboxes to deliver a maximum speed of eight knots and a cruising speed of seven knots. Also installed in the engine room is a dedicated fire alarm system, though portable extinguishers are also available on board.

“The propulsion is designed to accommodate engines with minimal fuel consumption,” NMDC told Baird Maritime. “The heavy lifting on the displacement with a cruising speed of six knots is achieved thanks to enhanced weight distribution and the highly optimised hull design.” 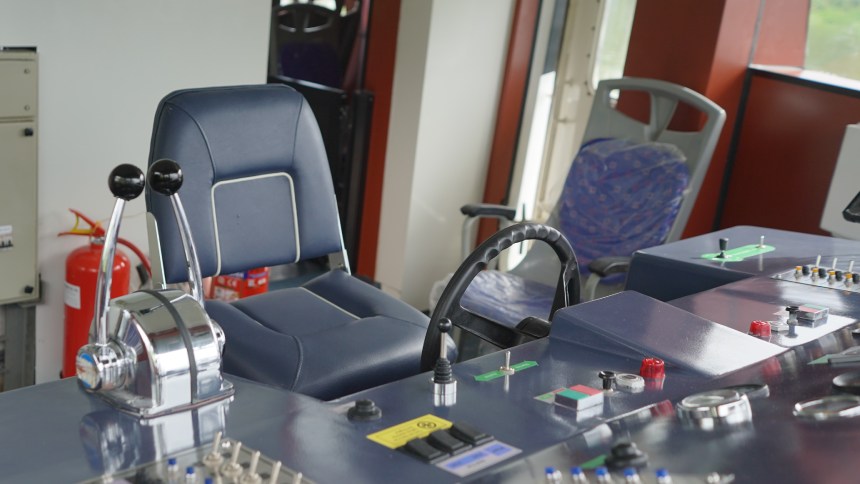 For navigation, the ferry relies on a Garmin GPS and depth sounder. Power for these and other electronics is drawn from a compact ESS developed in-house by NMDC.

“This is the auxiliary power source that will shoulder some of the energy load. Roof-mounted solar panels supply power to the ESS, and this setup is coupled with an advanced intelligent energy management system.

The deck equipment meanwhile consists of bollards and anchor winches, which the builder said are typical features on such ferries. 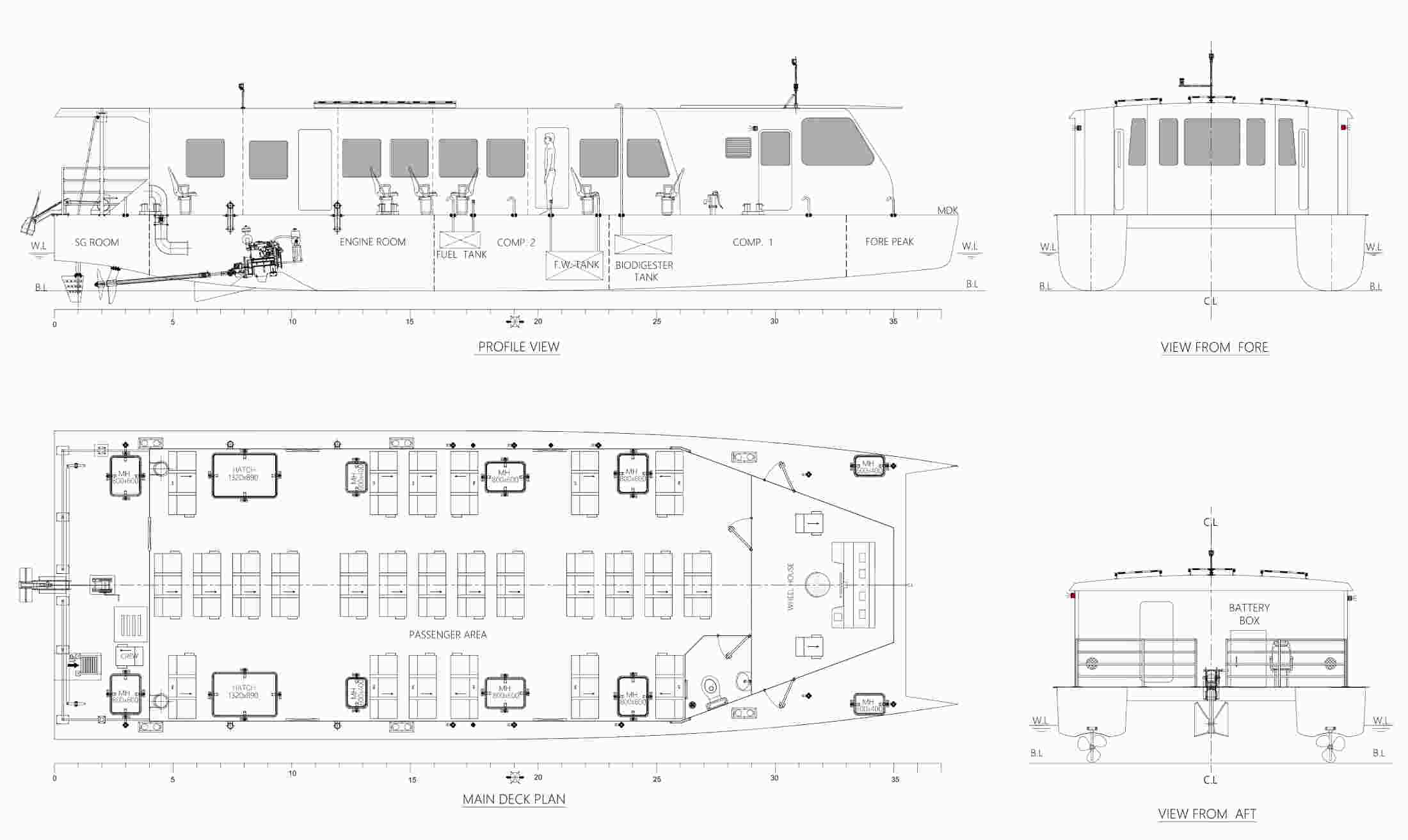