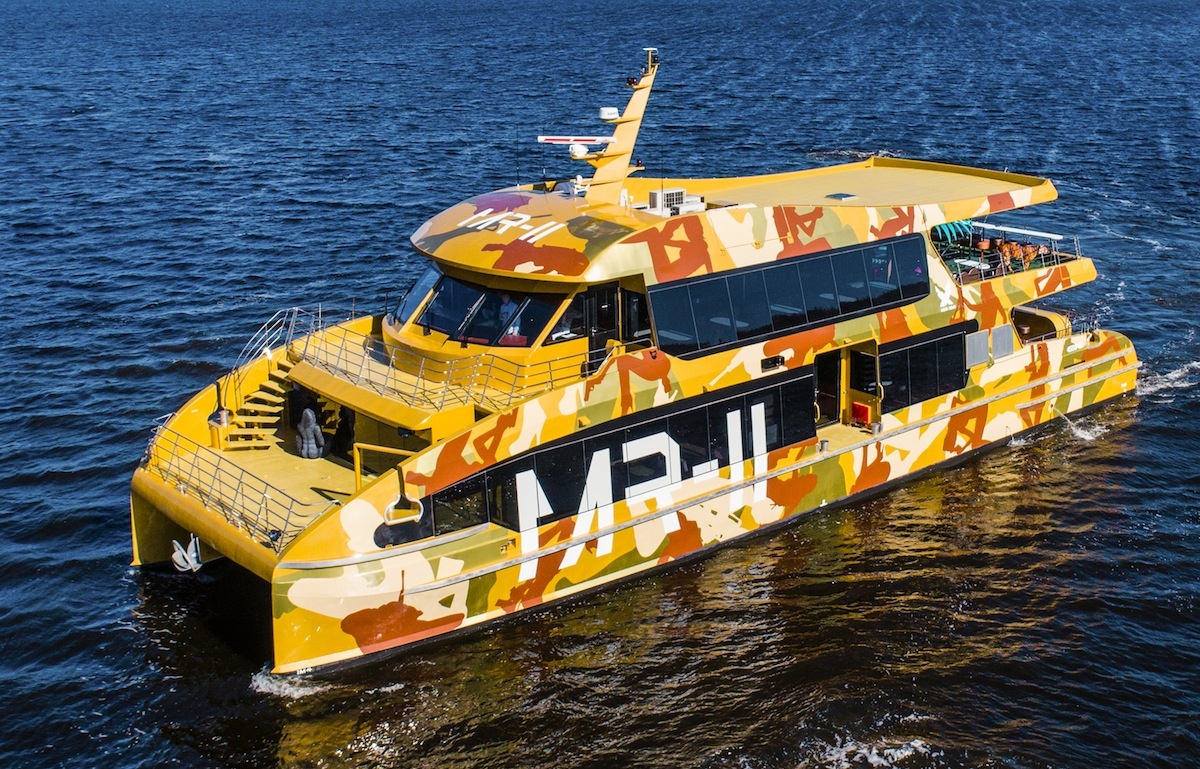 Richardson Devine Marine Constructions was selected through a competitive tender process to build Mona Roma II (MR-2) – formally named Freya, after the Norse goddess, who is aptly described as “something of a party girl”.

The owners had a previous 35-metre vessel (MR-1) designed by Kim Chamberlin’s firm Commercial Boat Design. They asked Kim to design a vessel of similar lines and characteristics but downsized to 29 metres.

“The greatest challenge was to fit the functionality and equipment of our previous 34-metre design into a smaller 29-metre platform,” commented Mr Chamberlin. “Whilst doing this our often competing goal was to maximise efficiency in order to keep the operating costs per head comparable to the larger vessel. In the end, even with the considerable fitout resulting in a full load displacement of 105 tonnes, this was immensely successful and she carries the weight with efficient ease.

“We also once again had to contend with the very shallow water requirements of the route whilst maintaining conventional propeller propulsion. Luckily this is something to which our unique hullform is very much suited. Other vessels have suffered difficulty accelerating up to speed in the shallows, however this vessel has no issues at all in this regard, with impressive acceleration in both shallow and deep water.”

The vessel is unlike any other in layout and style, providing the versatility that the operator sought to be able to utilise the boat across a number of roles, from regular passenger service to Hobart’s famous Museum of Old and New Art (MONA), to catering for weddings or extravagant corporate functions.

The thirty-minute ferry ride from Brooke Street Pier in downtown Hobart to MONA is a much-loved part of the MONA experience, and the new ferry builds on that tradition. 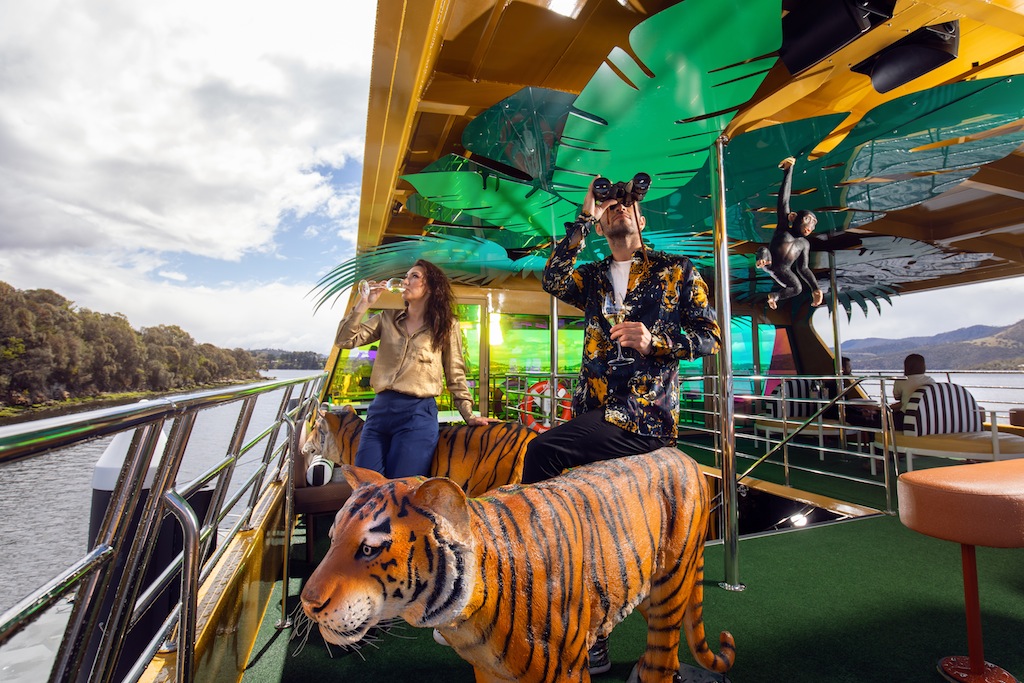 Extra height windows were requested for an open, spacious and light feel, as was high clearances to deck head linings of 2,300 mm.

The tongue-in-cheek theme extends to the exterior treatment of the ferry, with the vessel wrapped in what the designers have described as “subliminal camouflage”, which may or may not involve images of nude villainesses with machine guns.

“We’re fairly confident in will be the most Instagrammable ferry in Berriedale,” commented MONA Director of Marketing and Communication Robbie Brammall. Interior passenger volume is maximised with her wheelhouse set well forward on the upper deck. A notable difference from most passenger ferries is the interior layout. There are no rows of seats, but being an evil billionaire’s lair there are fully stocked bars every few metres, so guests can arrive at MONA fully hydrated. Casual seating is laid mainly around the perimeter of each passenger space.

The vessel was commissioned to meet expanding visitor demand at MONA, which now exceeds 400,000 visitors a year – 180,000 of whom choose to arrive by ferry. The extra capacity will enable an expanded timetable and some much anticipated new products – like an after hours ferry that will bring diners to MONA’s restaurants long after the museum has shut for the day.

She will also be available to provide ferry services between Hobart city and the planned MONA hotel. During periods of lower demand where the larger vessel can handle the MONA ferry demand, Freya can be made available for charter with a broad variety of service offerings. 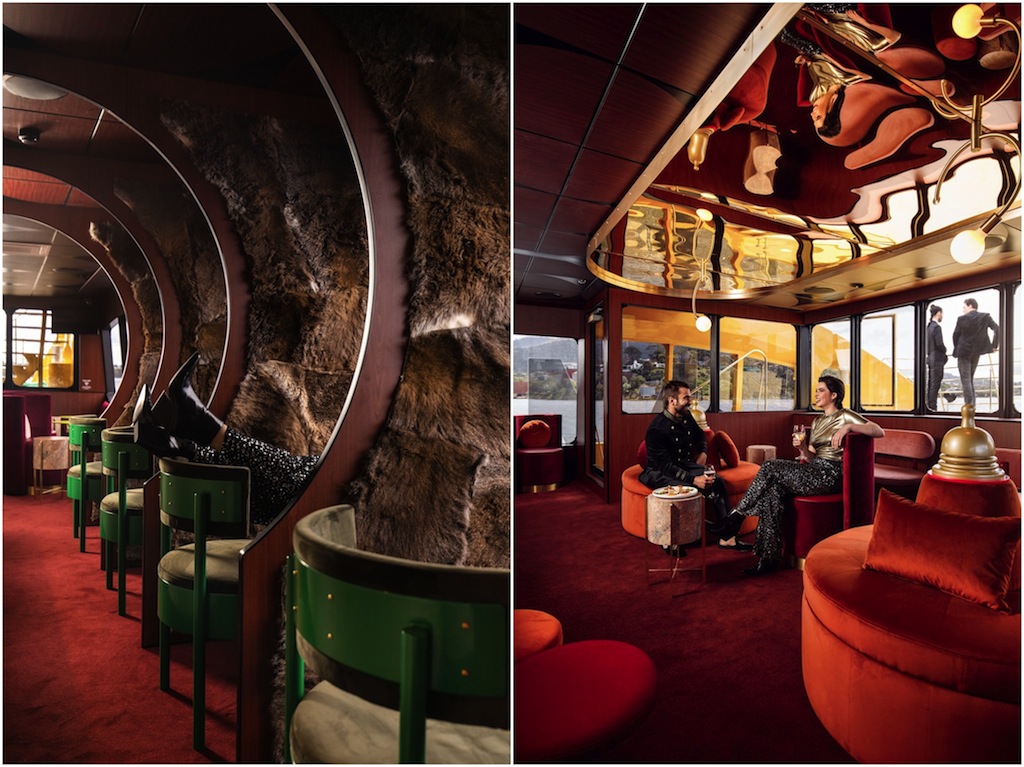 Another notable feature of the new ferry is an expanded “posh pit”, which is an opulent VIP club in the forward section of the vessel, with exclusive booths, plush carpet, velvet upholstered arm chairs and a mirrored ceiling, where guests are treated to complimentary drinks and canapes. And yes, it also features a gorilla.

The vessel is in 1E service for operations in the River Derwent but can easily be changed to 1D if required for future operations. 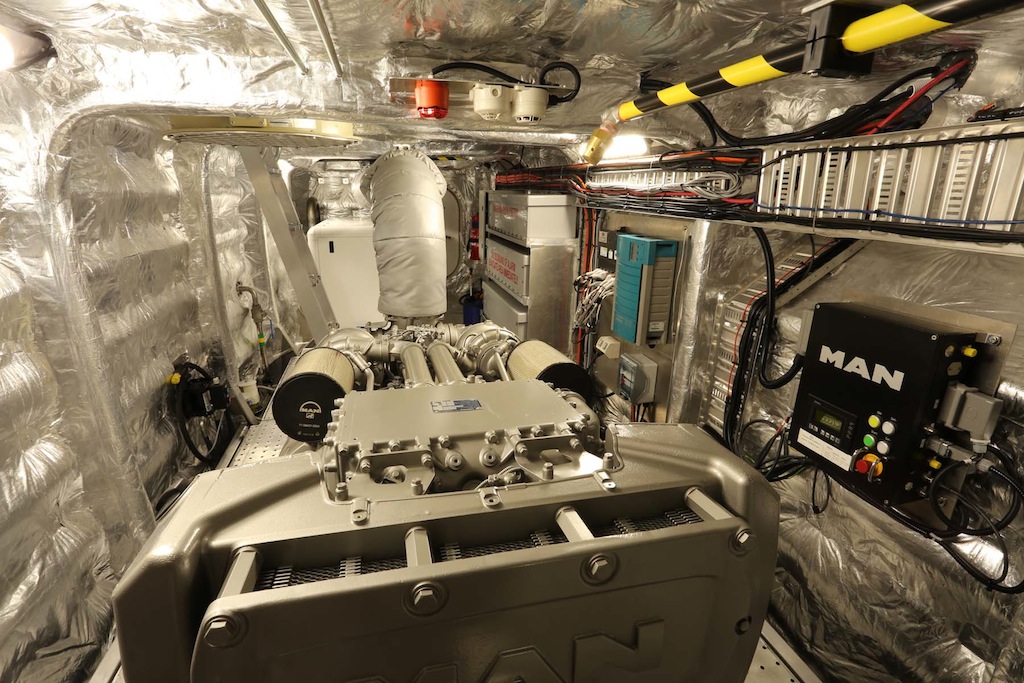 Further regulated for manning and survey requirements and to meet her maximum operational service speed of 25 knots, Freya is exceptionally efficient, with the engines running at just 66 per cent load. This should equate to exceptional fuel efficiency for the clients as well as what should be significantly increased engine life. 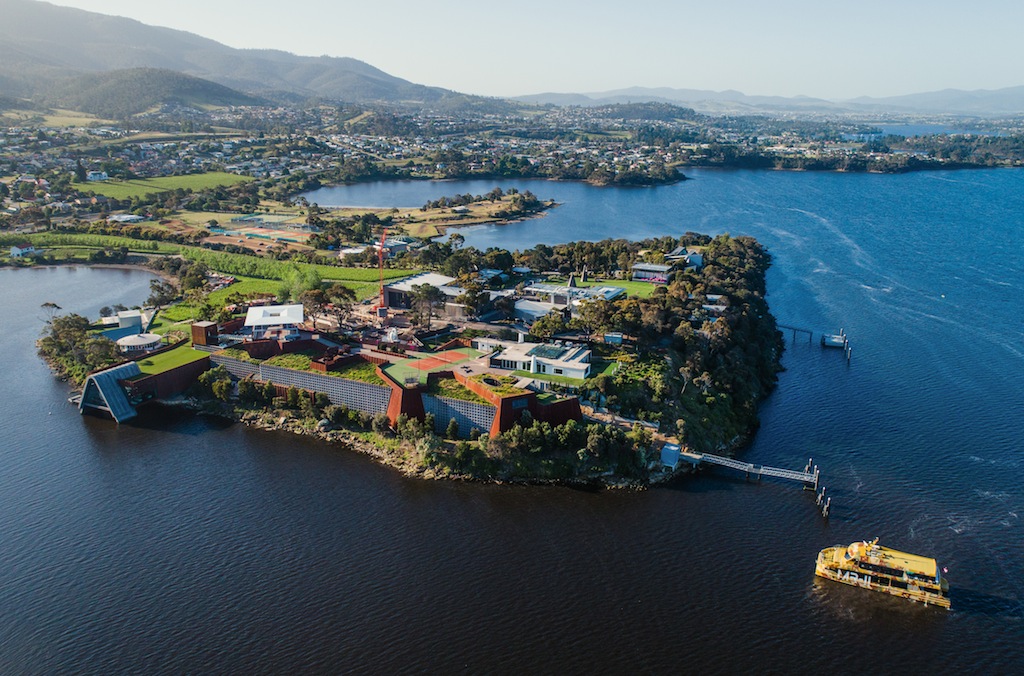 Should the vessel be on sold or her service requirements alter, with a change in survey status, the operator has the option to call for more power from the installed powerplant as required.

“Some refinements to our hullform after tank testing and further R&D have taken what was already an extraordinarily efficient design to a whole new level, whilst maintaining generous hull interior space to accommodate machinery and equipment,” commented Mr Chamberlin.

Kohler gensets in sound shields with special attention to minimising any vibrations or rattles along with under carpet and engine room sound proofing insulation offer a quiet, smooth ride.

The design was required to carry sufficient fuel to go a week between refuelling during peak periods and 2,000 litres of both fresh water and sullage. 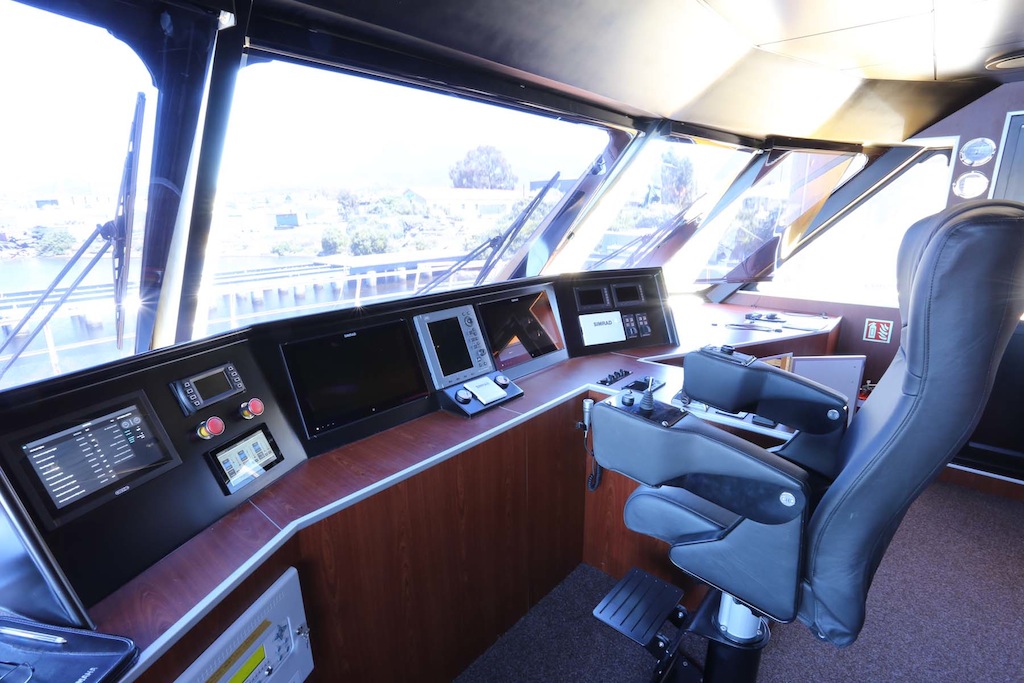 A mainly Simrad suite of electronics was selected for the vessel to offer fleet continuity for the operator. Simrad had proven to be a reliable choice previously and maintaining brand continuity makes for an easier transition for skippers as they transfer from vessel to vessel. Moonraker aerials were used for the Icom communication equipment.

A FLIR night vision camera was installed that is continuously recorded through a DVR. The calm water route in the upper reaches of the River Derwent is a popular area for rowers and kayakers so a keen lookout is important and the FLIR is a valuable aid.

The only piece of significant conventional deck equipment is the Apco custom drum anchor winch. The RDM standard is to install the anchor winch in a recessed well under the foredeck with flush deck hatches, providing an accessible and safe area for passengers to enjoy their cruise.

More interesting to the passengers perhaps is the life size gorilla on the foredeck, the two tigers on the aft deck and the monkeys swinging from the deckhead. 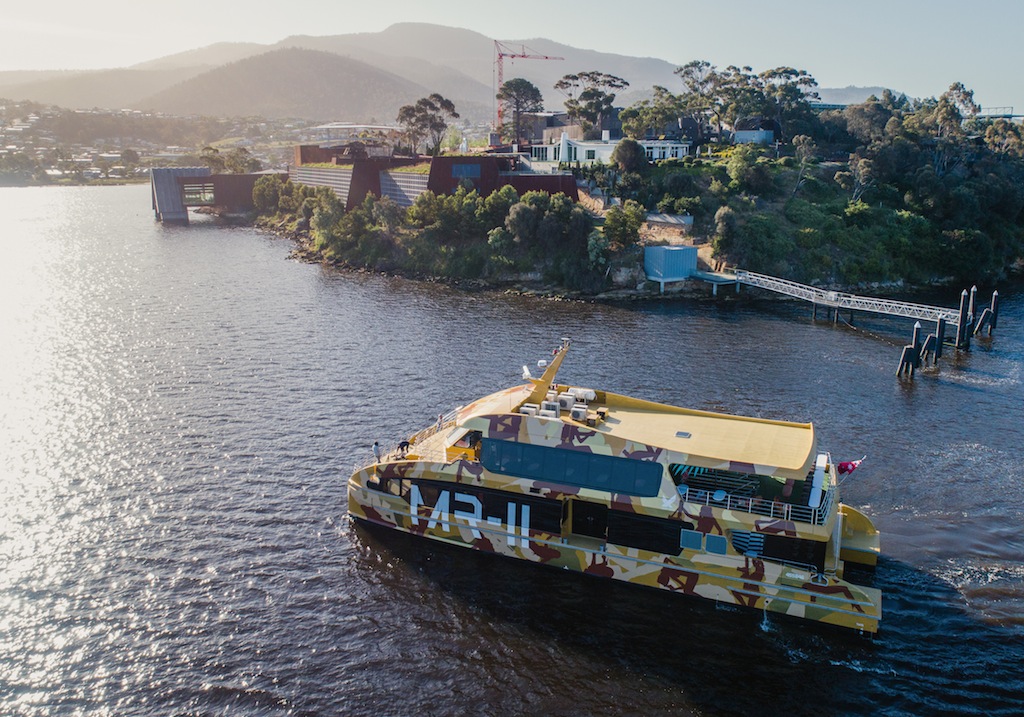