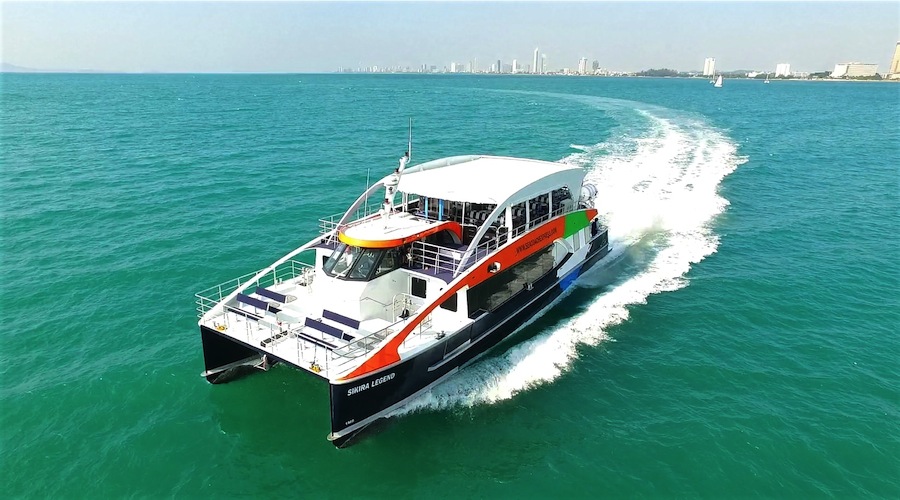 Starting life as a 22-metre spec boat, she was purchased during the build phase giving the owner a four-month delivery time and the opportunity to custom design the final layout, engine choice, colours and so on.

This will be the first vessel of its size and type to operate in Sierra Leone as a coastal catamaran ferry. The owner required a medium- to high-speed ferry that could carry up to 200 passengers at cruise speeds between 22 and 25 knots. The brief was for a simple, safe vessel with good seakeeping in coastal waters, with waves up to two metres high.

On weekdays the vessel will do a coastal run between two and three hours long each way. On the weekends, the vessel will operate as a venue for functions such as weddings, corporate events, conferences and parties. The vessel will add a new dimension to West African transport by sea, by significantly reducing transit times, in some cases from 10 hours down to three hours.

She is suitable for offshore services and runs smoothly in rough conditions thanks to her deep vee hulls and aerofoil mini-keels, which give great tracking in a following sea. Results of the sea trials were a top speed of 29 to 30 knots with economical operating cruise speed options. 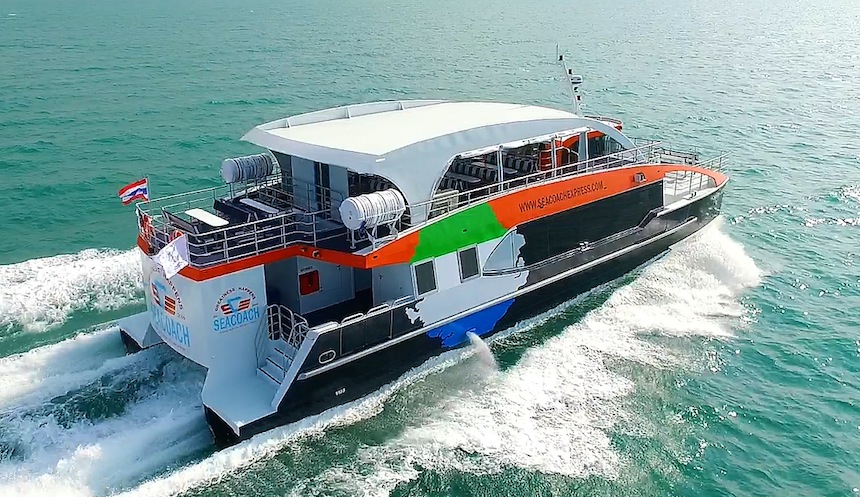 “This is the fourth hull built using this design,” Paul Birgan, Design Manager at SeaCat Ships told Baird Maritime, “so the construction was fairly straight forward.

“Our main challenges were to accommodate the luggage requirement which we achieved by adding a large luggage pod on the aft deck for suitcases and extending the hull for additional buoyancy. We also included a luggage compartment in the main cabin.

“Another challenge was to add a hard top that would look aesthetically pleasing. Previous attempts had not quite worked, looking like last minute add-ons. This, I believe, was made possible due to the nice sweeping arms of the structure and lots of styling curves.

“The upper deck features nice custom made aluminium furniture that will last a lifetime with nice table and chair arrangements with upmarket cushions.” 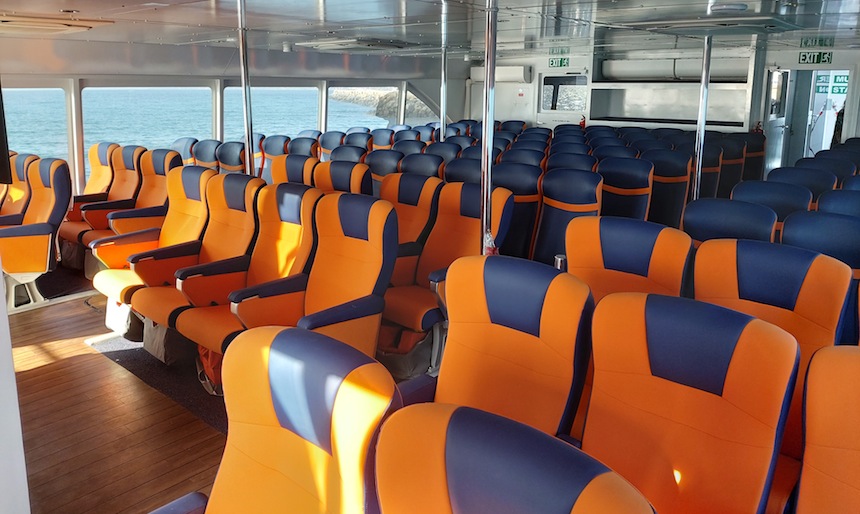 The open plan deck arrangement also provides access to all areas for light and ventilation. 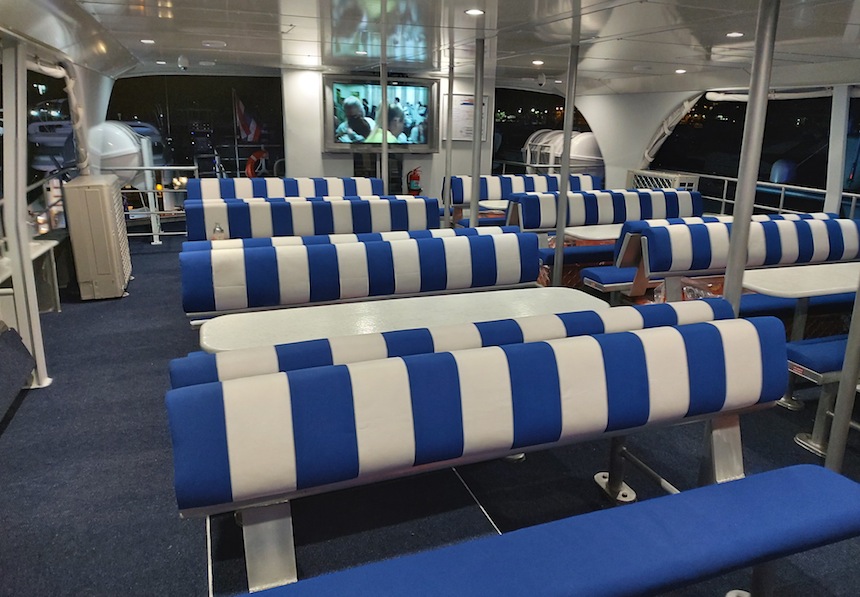 Seated passengers on the main deck have air-conditioned comfort with ample redundancies. Alfresco seating is available on the upper deck with a hard top and roll down curtains. The upper deck is designed to be like an open-air theatre, with large waterproof screens at either end.

The captain is perfectly positioned to do the docking and oversee the loading and discharge. Sikira Legend is built to Australian NSCV Class 1C (Coastal Ferry) standards and the design has been approved and survey inspections carried out.

The propulsion system is standard prop/shaft with SeaCat’s aerofoil mini-keels, which give protection to the stern gear and ability to slip on her own hull.

The cut-away hull in the way of the mini keel gives a relatively low draught of 1.6 metres fully loaded. This gives the owner security to operate in seas where there is debris or shallow water where grounding or debris strike is a possibility, as well as the ability to perform the antifoul and slipping without access to a dockyard.

The chosen electrical set up consists of two 60kVa Zenith gensets. The second is a backup as the vessel operates comfortably on just one. She has a large inverter and battery supply giving great redundancy. In fact, she can operate with both gensets off, except for the air conditioning. The air-conditioning is a Daikin commercial split system with 150 per cent capacity with built in redundancies.

Two large switchboards are located on the aft deck in a heavy-duty aluminium locker. The bilge system is 100 per cent electrical with two AC submersible bilge pumps in each hull, having independent power supplies.

The electronics and steering package come from Brisbane and are predominantly Simrad and Hydrive. The majority of electrical and electronic items were supplied out of Australia and meet Australian AS 3000 standards.

The main interesting feature of the electrical system is the inclusion of many redundancies as requested by the owner due to the remote location of the operation. 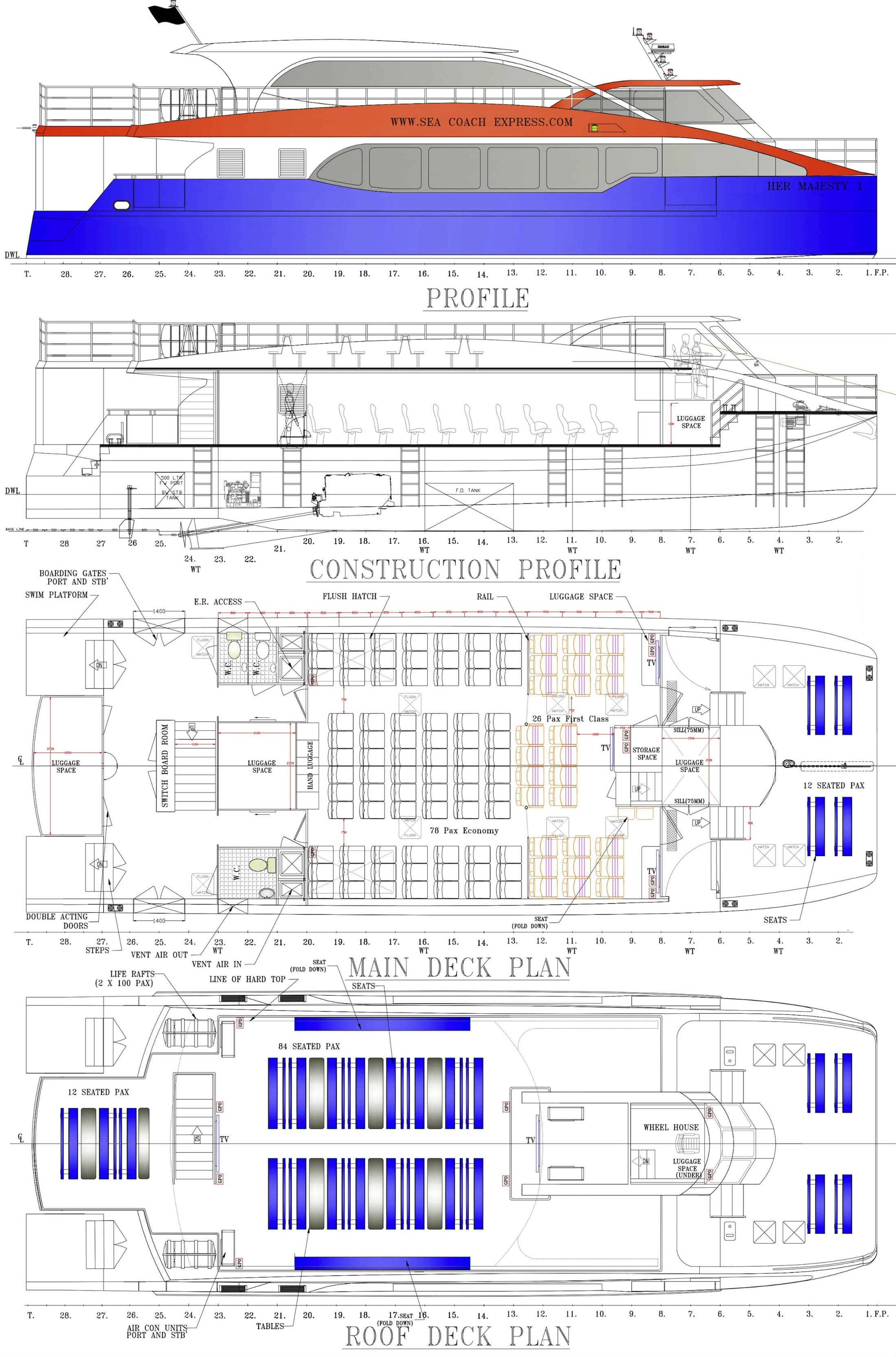