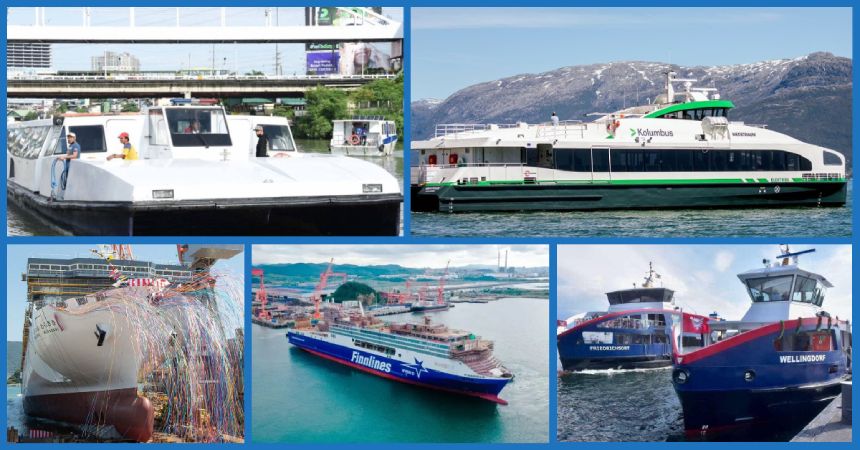 New ferries have been delivered to operators in Germany and Norway as construction is underway on large Ro-Paxes for use in Japan and Finland. An upcoming design competition involving student teams from around the world meanwhile seeks to introduce a new commuter vessel to serve residents in and around the Philippines’ capital city.

German operator Schlepp- und Fährgesellschaft Kiel (SFK) christened one of its newest electric ferries in a ceremony in late August.

Built by the Holland Shipyards Group, Wellingdorf is the second ferry in a series to join the SFK fleet. The newbuild measures 24.7 by 7.2 metres and is a sister vessel of the previously delivered Düsternbrook.

Wellingdorf is powered entirely by batteries with an installed capacity of 1,092 kWh. The battery pack also has 20 solar panels on the roof to  supply power for the onboard systems.

The ferry is fully electric with no backup diesel engine. Redundancy is provided by a split battery system.

The 31-metre-long Medstraum will be operated by the Transport – Advanced and Modular (TrAM) Project, an EU-funded initiative, while ownership will remain with Kolumbus. Its initial sailings will be between the city of Stavanger and the surrounding communities and islands.

The DNV-classed vessel can transport 147 passengers at a service speed of 23 knots. A 1.5MWh battery supplies power to two electric motors.

Sunflower Murasaki is scheduled for delivery in March 2023. It will serve the Osaka-Beppu route, replacing an existing vessel.

Once completed, the new ferry will have an LOA of 199.99 metres and capacity for 716 passengers and 137 lorries.

Finnish operator Finnlines has confirmed that its first new Ro-Pax ferry in a series has been launched in China while the keel for its sister vessel has been laid at the same shipyard.

The first vessel, Finnsirius, was launched on Tuesday, August 30, and the keel-laying of the second one, Finncanopus, was held on Thursday, September 1. The two vessels will start to operate from Finland to Sweden and the Åland Islands in 2023.

The Superstar-class ferries will be the largest Ro-Paxes in the Finnlines fleet. When completed, each ferry will have a length of 235 metres and capacity for 1,100 passengers and 5,100 lane metres of freight.

The ferries are being built by China Merchants Jinling Shipyard (Weihai).

The 2022-23 Design Competition for a Safe Affordable Ferry will be focused on designing an electric ferry for the Pasig River in Manila, Philippines.

The WFSA clarified that student teams that register by December 31, 2022, will be provided with the Terms of Reference. Entries are due on January 30, 2023.

The association said the objective of the International Student Design Competition is to reduce ferry fatalities with designs of safe, affordable vessels. For the past eight years, awards of US$10,000 annually have been made to student teams, with the top prize each year being US$5,000.

Registration is via this link.