Passenger Vessel News Roundup | July 21 – New ferries for US, Germany and India, a river cruise ship for the Rhine and more

New ferries have entered service in the US, India, and the German Baltic Sea while a new river cruise ship begins operational sailings in Germany. An Italian shipyard has secured a cruise ship newbuilding contract from an unnamed customer. Lastly, a US-operated expedition vessel comes under new ownership barely a year following initial delivery.

Mary Ann Market honours the late founder of Miller Boat Line. It was completed by Fincantieri Bay Shipbuilding of Wisconsin to a design by the Elliott Bay Design Group of Seattle.

The newbuild is the largest vessel in the Miller Ferry fleet with capacity for 600 passenger and 28 vehicles. It will be operated between Put-In-Bay and Middle Bass Island. 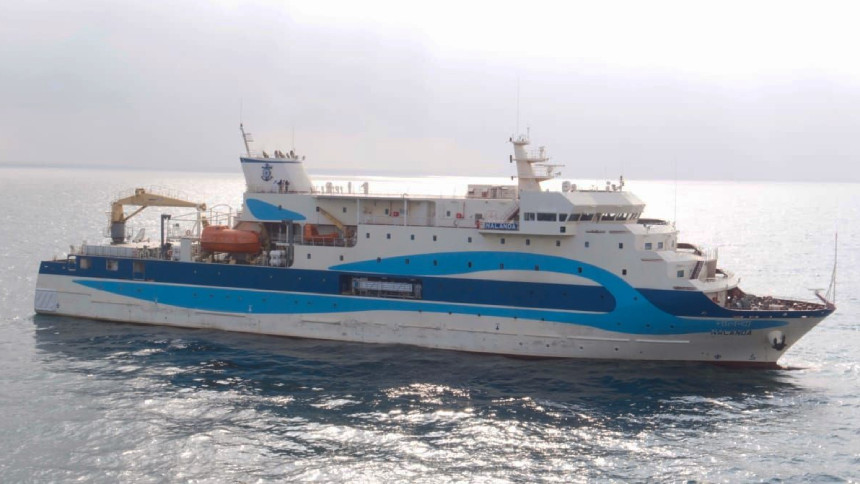 Nalanda has a length of 100 metres, a beam of 17 metres, a draught of 4.3 metres, and a speed of 16 knots. Space is available for 500 passengers and 150 tonnes of vehicles and other freight.

Amenities include recreation rooms, a library, a gymnasium, and a cafeteria.

Design work on the ferry was done by local engineering firm Smart Engineering and Design Solutions in collaboration with Knud E. Hansen of Denmark in compliance to ABS and Indian Register of Shipping rules.

A new solar-powered ferry has begun operational sailings in the Baltic Sea between mainland Germany and the island of Usedom.

Operated by shipping company Oderhaff Reederei Peters, the steel-hulled Antonia von Kamp measures 14.65 metres long and can carry 20 passengers and 15 bicycles. A Torqeedo 80kWh battery pack draws power from solar panels to drive a 60kW electric azimuth thruster, enabling the vessel to sail at a maximum speed of eight knots and a cruising speed of 4.3 knots.

The ferry was built by local shipyards Ostseestal and Ampereship.

Norwegian-built fast electric ferry to serve Stavanger and nearby islands

The 31-metre-long Medstraum will be operated by the Transport – Advanced and Modular (TrAM) Project, an EU-funded initiative, while ownership will remain with public transport company Kolumbus. Its initial sailings will be between the city of Stavanger and the surrounding communities and islands.

The DNV-classed vessel can transport 147 passengers at a service speed of 23 knots. A 1.5MWh battery supplies power to two electric motors.

The TrAM Project partners claimed Medstraum is the world’s first fully electric and zero-emission fast ferry classed in accordance with the International Code of Safety for High-Speed Craft (HSC Code).

Built by Westcon Yards, the newbuild will be operated by transport company Kolumbus on behalf of Norled.

The DNV-classed ferry has capacity for 96 passengers, 27 cars, and two trailers. Power is provided 4,000kWh battery pack while backup power is available in the form of biodiesel-fuelled engines.

The 135-metre-long A-Rosa Sena has capacity for 280 guests and amenities including restaurants, outdoor lounges, a spa, a wellness area, swimming pools, and a children’s activity area.

Italian shipbuilder Fincantieri has been awarded a contract for the construction of a new ultra-luxury cruise ship to be delivered by the end of 2025.

The order, which includes options for two additional vessels, amounts to approximately €1.2 billion (US$1.23 billion). The contract will be subject to access to financing, as per industry practice.

Once completed, the vessel will be delivered to an undisclosed customer.

The Royal Caribbean Group has confirmed that it has received court approval to acquire the ultra-luxury expedition cruise ship Crystal Endeavor.

Originally delivered to Crystal Cruises in 2021, the ship will be renamed Silver Endeavour when it officially joins the fleet of Royal Caribbean Group’s wholly owned subsidiary Silversea Cruises later this month.

The purchase price for the vessel was US$275 million, significantly below the cost of construction. The vessel was fully financed through a 15-year unsecured term loan, guaranteed by the German export credit agency, Euler Hermes, with no amortisation payments in the first two years.

Built to PC6 polar class specifications, the ship can operate all of Silversea’s current expedition itineraries and is designed specifically to take travelers to the world’s most remote destinations, including both polar regions.

Silver Endeavour is scheduled to begin service in the winter of 2022/2023, spending its inaugural season in Antarctica starting this November.