Written by Valentine Watkins on October 29, 2013. Posted in Ferries.

As an Irishman it would be remiss of me to let the fortieth anniversary of a company dear to my heart pass by unmentioned.

Irish Ferries came into being as Irish Continental Line in 1973. A subsidiary of state-owned deep-sea carrier Irish Shipping, the first ship on the direct service between Ireland and France was the Saint Patrick. Weighing 5,285GRT, Saint Patrick provided accommodation for 1,040 passengers (of which 555 were provided with berths).

On the vehicle decks was space for 200 cars, 30 trucks, or a mix of the two, all of which were loaded through bow and stern doors. Atop her white hull and adorned with a St Patrick’s cross for Ireland and the Fleur de Lis of France was the buff funnel of Irish Shipping. The ship sailed from Rosslare on her maiden voyage to Le Havre in early June 1973.

In 1977, ownership of the ‘Saint Patrick’ was transferred from Irish Shipping to Irish Continental Line. This turned out to be a fortuitous, maybe inspired decision, as Irish Shipping was to face liquidation in late 1984 following 43 years of service to the Irish state. There followed two and a half years of uncertainty as the search for a buyer took place.

Eventually, a consortium of institutional investors led by Eamonn Rothwell and NCB Stockbrokers made a successful bid for the company in 1987. The deal for Irish Continental Line was completed for IR£4.0 million (US$6.98 million) and the assumption of IR£12 million (US$21 million) in debts.

Under the Irish Continental Group (ICG), Irish Continental Line became Irish Ferries. Towards the end of 1987, ICG decided to launch onto the smaller companies’ market of the stock exchange. The first day of dealing was April 6 1988, when IR£2.7 million (US$4.71 million) was raised. About 80 per cent of the staff of the company subscribed to the stock issue, with a significant proportion of the group’s shareholding eventually finding its way into the hands of employees.

Meanwhile on the Irish Sea, state-owned Irish Sea operator B&I Line was in serious trouble, setting the scene for privatisation. In mid-December 1991, The B&I Line Bill completed its passage through Ireland’s parliament, allowing sale of the company to Irish Continental Group for IR£8.5 million (US$14.86 million), the Irish Government agreeing to write off past loans to B&I of IR£35 million (US$61.2 million).

The new owners of B&I wasted little time in restructuring the company, introducing change wherever necessary to improve efficiency.

With traffic increasing steadily on its new Dublin-Holyhead and Rosslare-Pembroke routes, ICG now considered its tonnage options. Investment in a new purpose-built ship became increasingly tempting and negotiations were initiated with several shipyards. In 1993, ICG took the big step: placing an order with Samsung Heavy Industries in South Korea. But on the eve of signing a contract, SHI pulled out owing to lack of experience in building Ro-Pax vessels. ICG turned to Dutch shipbuilder Van der Giessen-de-Noord of Krimpen, Rotterdam, for a 23,000-tonne vessel at a cost of IR£46 million (US$80.45 million).

The new Isle of Innisfree arrived in Dublin in mid-May 1995, taking up service eight days later. Remarkably, the new ship was soon working to capacity and Irish Ferries began grappling with the idea of building an even bigger new ship for Dublin and at Rosslare, replacing the ship there with the Isle of Innisfree. The company approached shipyards in Germany, Norway, Finland, Italy and, once again, Korea, but again it was Van der Giessen-de-Noord at Rotterdam that won the day.

In October 1996 a second and larger new vessel for Irish Ferries was launched. The Isle of Inishmore arrived in Dublin from Rotterdam in gale-force conditions in February 1997. At the time, the ship was the largest passenger-car ferry in north-western Europe.

In 1998, ICG announced that they were to enter the fast craft market by placing an order with Austal Ships for a twin hulled Auto Express fast craft capable of maintaining 39 knots for the Holyhead route. Named Jonathan Swift, the 86-metre vessel sailed from Fremantle Western Australia in April 1999 on her delivery voyage to Dublin, arriving in June. In July, just days after the craft’s maiden voyage, ICG announced yet a further new building.

With freight traffic continuing to grow, the Isle of Inishmore quickly – and unpredictably – proved too small to cope with demand. ICG had considered introducing a second RoRo ship to assist her, but this was ruled out on the grounds that it would be uneconomical. This raised the possibility of another, even larger, newer ship to replace the Isle of Inishmore.

Greater economies of scale meant that such a ship made sense, but there was a problem of sheer size and the operational confines of both Dublin and Holyhead. If port confines limited and dictated a ship’s length, there was only one way to go – up. The new ship – all 12 decks of her – was ordered from Aker Finnyards of Rauma, Finland, at a cost of €100 million (US$137 million).

The new Ulysses doubled Irish Ferries’ capacity on the Dublin-Holyhead route and released the Isle of Inishmore to transfer to the Rosslare-Pembroke Dock service just four years after her maiden voyage. This in turn made the Isle of Innisfree available for charter to P&O Ferries at Portsmouth. Today, she remains in ICG ownership on charter to New Zealand’s KiwiRail as the Kaitaki. In fact, she has recently completed a major refit in Brisbane, Australia.

While ICG revamped the former B&I routes, the future of the French routes (which were the backbone of ICG’s activity) was always in mind, especially replacement of the Saint Killian II and Saint Patrick II. Shipping observers speculated about the possible introduction of a cruise ferry recently purchased by ICG. The 37,500 tonnes Viking Line ferry Olympia, then newly installed on charter to P&O European Ferries as their Pride of Bilbao, had become available for purchase.

ICG successfully acquired the ship from Rederi of Slite for IR£56 million (US$97.8 million). The P&O charter was due to expire in April 1996, but there were options to renew for a further five-and-a-half years. With these options exercised, ICG confirmed an agreement for a twenty-one month charter of the 1982-built Baltic ferry Normandy.

The Normandy took over the Ireland-France services on April 1998. She proved to be a good servant but was very much a transitional ship. With shipyard order books full and the prospect of paying more than €100 million (US$137 million) for a new vessel, there was only one realistic option to strengthen the fleet – source an existing ship.

In September 2007, Irish Ferries took delivery of the 1989-built Kronprins Harald from the Norwegian Color Line. Renamed Oscar Wilde, she entered service in December on the Rosslare-Pembroke Dock route and finally on her intended route: Rosslare-Cherbourg and Roscoff.

Irish Ferries has done well to weather the GFC and Ireland’s economic downturn in particular. In protecting the future of the company, it has had to face some difficult crewing decisions. The company, along with its terminal and container partners, is well placed to meet the challenges of the next decade.

Fujian Straits Express is about to increase its fast ferry service on the Taiwan Strait by adding Taipei to its Pingtan county-Taichung city route.

The 98-metre Incat craft Haixia will make the Pingtan-Taichung-Pingtan round trip almost daily, with additional trips to Taipei on Wednesdays and Saturdays. The Haixia made a 2.5-hour trial voyage to Taipei in late May and this was followed in August by route approval from Taiwanese authorities.

Although the craft has capacity for around 20 trucks, the Haixia, will carry only passengers in the first stages of the Pingtan-Taipei route. It is not known when cargo will be catered for. Statistics show that the Haixia has carried more than 150,000 passengers across the Taiwan Straits since its launch in November 2011, thus making a big contribution to Pingtan tourism.

The Haixia only began accepting cargo on the Taichung service earlier this year. According to local port administration authorities, the vessel transported approximately 1,800 tonnes of freight and 30 tonnes of international mail and packages in the first six months.

Interestingly, the presence of the fast ferry service is said to be responsible for driving the Pingtan fisheries industry. Several batches of abalone are regularly shipped to Taiwan on the Haixia and then exported to Japan. The entire operation occurs within one day. 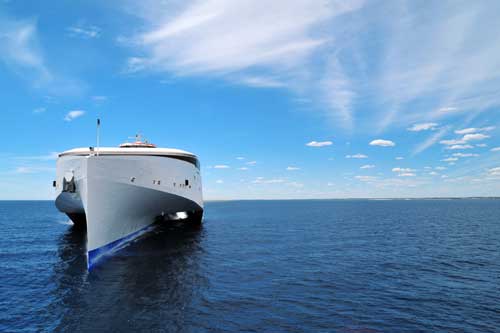 Will Austal’s long-dormant 102-metre trimaran be snapped up by Europe’s ferry market?

Now with the busy summer season behind them, the northern winter months usually sees ferry operators planning ahead for the next season. Pre-GFC, this usually saw a lot of activity in the fast ferry sector with fast ferry deliveries always an attraction.

Obviously, there hasn’t been much activity in recent years, but there are signs of small demand for large fast ferries, beginning with the delivery to Mols Linien of Incat’s 112-metre KatExpress 2.

Looking around Europe, the next possible ferry cab off the rank must surely be the Channel Islands operator Condor Ferries. The company’s fleet of 86-metre Incat vessels all date from the mid-1990s. With the level of services provided by the company under constant scrutiny in Jersey and Guernsey, vessel replacement has to be imminent.

In Australia, both Austal and Incat have vessels ready for delivery in time for the 2014 UK season. Austal’s long-idle 102-metre trimaran waits in Perth, while an 85-metre craft sits in Hobart. The latter is likely to be too small for the western Channel crossings – from Weymouth and Poole to the islands – so what’s the betting on a UK debut for the trimaran in time for Easter?

Meanwhile, the Austal-built 101-metre catamaran Euroferrys Pacifica has taken up service with Venezeula’s Conferry. As the Virgen del Valle II, the craft is now operating between from Puerto La Cruz, La Guaira and Isla Margarita.

The pending closure of the Rauma yard of specialist ferry builder STX Finland – with the loss of around 700 jobs – is not so much a shock but rather a monumental shame.

As the Korean empire is stripped down to pare back its huge debts, it was only a matter of time before the effects spread to the European arm. Newbuilding activity at the yard has been low. The last ferry built was P&O’s English Channel ferry Spirit of France in 2012.

As part of the STX Finland restructuring, functions at the Rauma yard and facilities will be shifted to STX’s other facility in Turku by next year. Jan Vapaavuori, Finland’s minister of economic affairs, has asked the shipbuilder to negotiate with the local government in order to minimise the effects of the closure on the local economy. The minister said that he would possibly take legal action to support the shipbuilding business.

“The decision was made based on an estimate of the company’s current state and the market outlook. The company is expected to make profits as early as next year,” said Jari Anttila, EVP and deputy CEO of STX Finland.