There are nine decks and 465 outside cabins that can accommodate a total of 930 guests, placing the Norwegian-flagged newbuild in what its owner has labeled as its “small ship” category. This makes the vessel capable of accessing even the smaller ones among the world’s many popular cruise ports, and this translates into suitability for a broad range of itineraries such as those covering the western Mediterranean, the British Isles, and the fjords of northern Norway.

Another 265 cabins are allotted for the vessel’s 465-strong crew.

The vessel’s interior was designed by a team consisting of SMC Design and Rottet Studio. The interior features traces of Scandinavian influence characterised mainly by what Fincantieri has described as sophisticated yet functional elegance. For instance, the onboard spa also has a sauna and a snow grotto, having been designed in accordance to the wellness philosophy of the Scandinavian tradition.

Guest cabin options include an owner’s suite with its own dining area, conference room and private sauna, 46 other spacious suites in two classes, and 418 all-veranda staterooms in three classes. The other accommodation spaces consist of two pools including an infinity pool at the stern, numerous al fresco restaurants, a lounge, an open-air sports deck, a miniature golf course, and a lawn bowling alley. Should guests wish to quickly quench their thirst during visits to warmer destinations, the vessel has drinking water stations situated along the port and starboard decks. 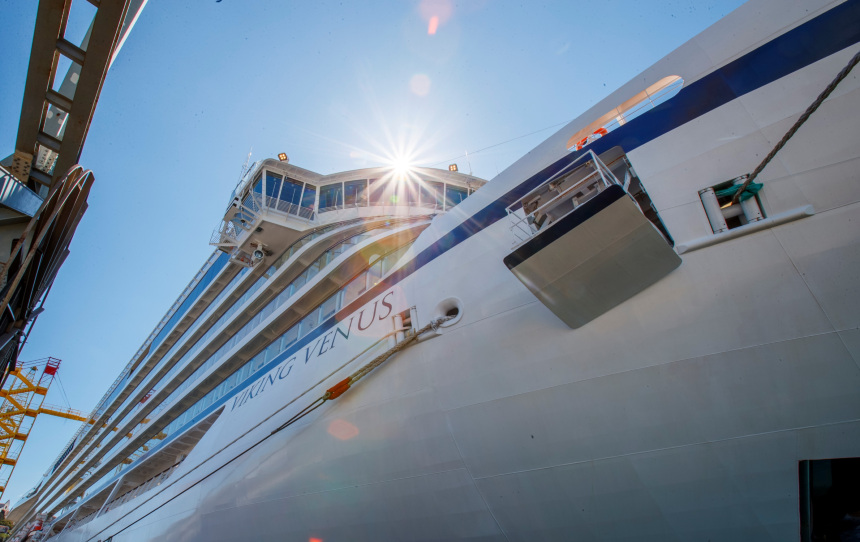 In place of casinos and child-friendly activity areas, the onboard public rooms contain bookshelves with a wide selection of reference materials on subjects such as maritime history and world exploration as an alternative form of recreation for guests. The ship also has embarked guides who are tasked to deliver lectures and host discussions on the various destinations under each itinerary, including each destination’s history and culture, so that guests will have a better understanding of the otherwise unfamiliar places where they are scheduled to disembark.

These features and activities that are available on Viking Venus are in line with Viking chairman Torstein Hagen’s aim of making the company’s ocean-going itineraries more aligned towards educating rather than entertaining the public – “The Thinking Person’s Cruise,” in Mr Hagen’s own words. The ship, however, still boasts venues that are allotted for live theatrical and musical performances in the evening.

The vessel is fitted with a modern safety system that will ensure “safe return to port,” particularly following an onboard accident that places the vessel itself and all on board at risk. This means the vessel’s redundant features will ensure it can continue normal operation for at least three additional hours, which is adequate time for either reaching a nearby suitable port or for safely evacuating all passengers and crew.

The energy-efficient engines and optimised hydronamics combine to help keep fuel consumption as low as possible while exhaust gas aftertreatment systems have been installed as well.