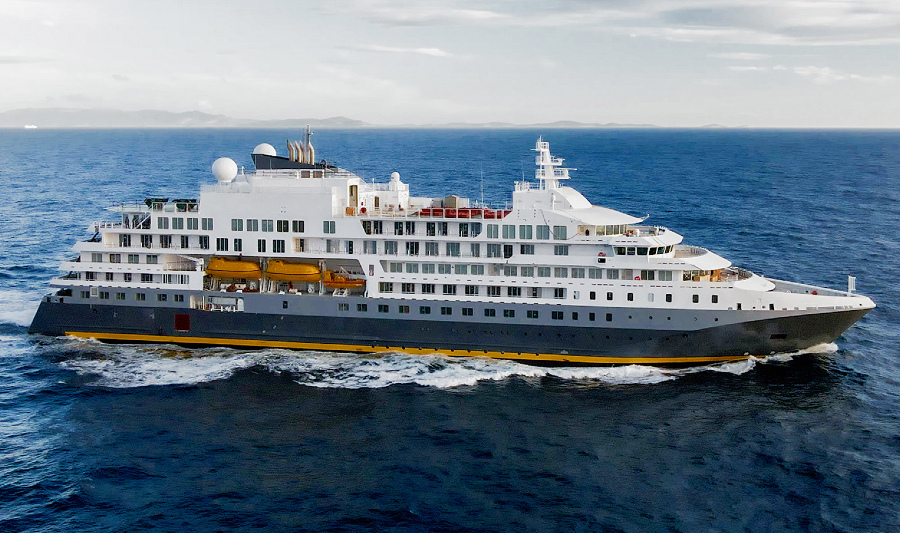 Designed by Norwegian naval architects LMG Marin, the Marshall Islands-flagged Ultramarine has a length of 420 feet (128 metres), a moulded beam of 72 feet (22 metres), a draught of 16.4 feet (5.1 metres), and accommodations for 199 guests and 140 crewmembers.

Onboard amenities include a lecture auditorium with a large display screen, two ready rooms with individual lockers where guests can stow their gear, a spacious restaurant that also provides direct access to the vessel’s 360-degree wrap-around deck, an indoor/outdoor dining bistro, a spa, a sauna, a fitness centre, and a lounge/bar with large panoramic windows. There is also a storage space specially designed for stocking cold-weather expedition gear.

The accommodation options across nine classes include solo cabins, three-person cabins, two-person suites, and an owner’s suite. The suites even feature audio speakers through which guests can listen to live broadcasts of the lectures given by the expedition guides as an alternative to being in the auditorium.

The newbuild has ice class 1A+ and polar class 6 notation and can cruise at 16 knots in open water thanks to a quartet of main diesel engines supplied by Anglo Belgian Corporation. The main engines supply power to four 4,023hp (3,000kW) electric propulsion motors as well as the two 804hp (600kW) bow thrusters, a single 1,072hp (800kW) stern thruster, and the vessel’s electrical installations. The engines are also compliant to IMO Tier III NOx emissions standards, ensuring reduced environmental impact whenever the vessel visits remote areas with fragile ecosystems such as those in the Arctic and the Antarctic regions.

The engines are placed in two separate compartments and enable Ultramarine to comply with Safe Return to Port (SRTP) standards in addition to guaranteeing a nominal operating endurance of 70 days. In the event of a mechanical failure that will force the vessel to operate on only one engine, it will still be able to sail up to 1,450 nautical miles at an economical cruising speed of six knots, and to do so even as it is subjected to Beaufort force eight winds.

The vessel is also equipped with a dynamic positioning system to eliminate the need for anchors that can otherwise disturb the seabed in an environmentally sensitive area.

The ship’s emission-reduction features include a micro auto gasification system (MAGS), which Quark has claimed can convert waste into energy right at the source. A heat recovery system takes some of the excess energy and converts it into fresh air to help reduce the energy needed for keeping the interior spaces adequately heated. All interior spaces have LED lighting as an additional emission-reducing measure.

The vessel’s embarked fleet of 20 inflatable expedition boats are housed in a stern hangar that is set at water level and is accessible from the two onboard ready rooms. The boats are launched into and recovered from the water via four embarkation points, enabling fast and safe access for guests when exploring remote locations.

Quark has further claimed that Ultramarine is the only polar vessel with two helicopter landing pads, allowing the embarkation of two light utility helicopters each capable of transporting nine passengers in addition to the crew of two. The incorporation of a second helipad will mean that the vessel’s expedition crews can serve more trips to and from remote polar landscapes that are only accessible by air.

Should an evacuation become necessary, the vessel comes equipped with four fully-enclosed lifeboats.

Ultramarine was handed over to Quark Expeditions earlier this year. It is scheduled to begin operational sailings this coming autumn with an 11-day Antarctic cruise out of Buenos Aires. 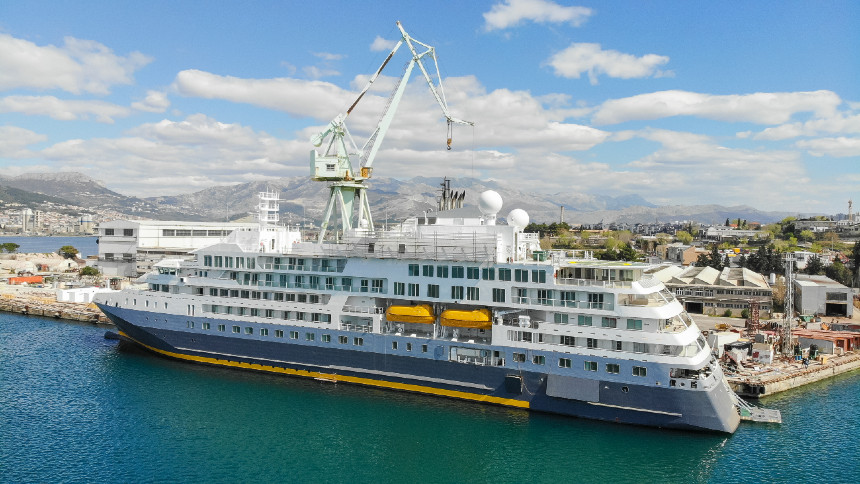