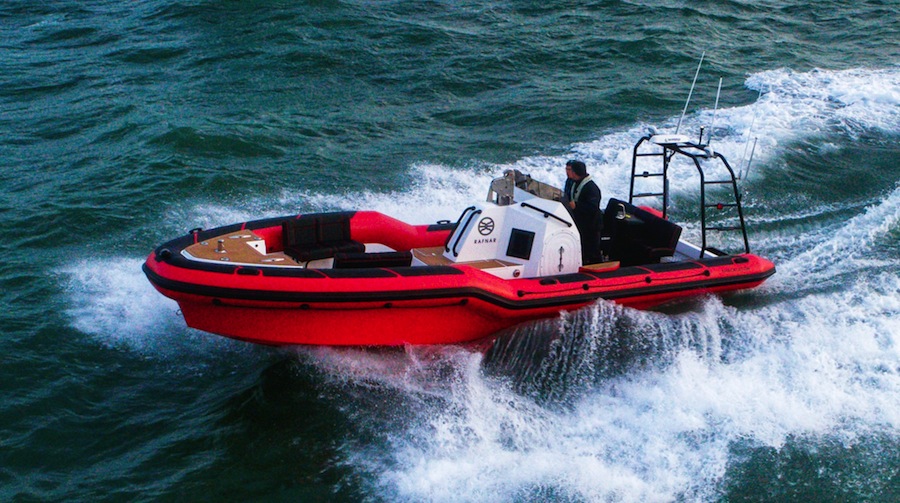 Boatbuilder Rafnar UK has handed over two rigid inflatable boats (RIBs) in a series to an unnamed operator that specialises in polar expedition cruises.

The RIBs both utilise an 8.5-metre Rafnar (Iceland) design that was originally developed for use as a search and rescue (SAR) boat and as a daughter craft for larger patrol cutters in use by a number of the company’s naval and coast guard customers.

The same SOLAS-certified patented hull design developed by Rafnar founder Ossur Kristinsson has again proven to be adaptable for the equally important role of providing support for expeditions. To further highlight their taking on this new mission, the boats have been named after the celebrated British explorers Sir Robert Falcon Scott and Sir Ernest Shackleton.

Duties will include crew and guest transfers, carrying stores, and surveying with the aid of a revolutionary new type of multi-beam sonar small enough to be fitted on the boats.

Rafnar UK said that the 8.5-metre RIB design had been chosen for its versatility, stability, and durability, as the areas in which the new boats will operate are known for their harsh environmental conditions that exact a tremendous toll on both man and machine.

“The owner had required two almost matching craft,” Rafnar UK told Baird Maritime. “This is due to their being used for two different roles in support of the owner’s expedition cruises. Scott (bright green) was to be used as a utility vessel while Shackleton (bright red) was to serve as the owner’s personal tender.” The builder explained further that the selection of bright colours for the boats had been deliberate.

“The boats will be operating in the stark surroundings of both the Antarctic and Arctic environments and therefore need to stand out clearly to the crew on the mothership when viewed from a distance. The main idea is that they can sail ahead of the mothership and act as pathfinders to identify a safe passage, and the bright red and green colours would help mark a channel through which the larger vessel could easily pass.”

Rafnar said building the boats was generally an easy endeavour as it has been aided in part by the vessels’ highly customisable nature. The only difficulty encountered was in sourcing the necessary parts as the contract for the new RIBs was awarded just as the Covid-19 pandemic began affecting the company’s UK operations.

The RIBs’ hulls use a principle known as “arc of circle.” This principle uses the water flow around the hull to essentially dampen the harsh slamming effects over waves so common in fast craft whilst low pressure zones allow the boat to effectively remain in a form of displacement mode even as it operates with similar speeds and efficiency as those provided by a planing hull boat. 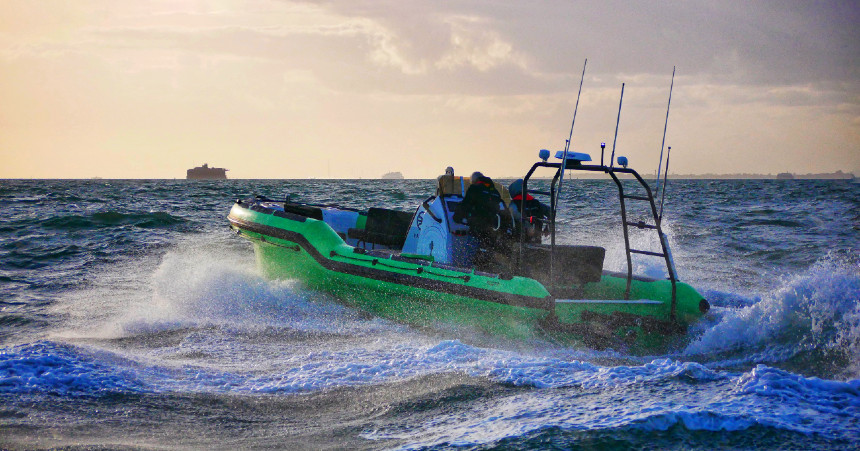 Scott and Shackleton also feature propulsion arrangements that are different from that of the baseline Rafnar 8.5-metre RIB, as the owner had wanted higher performance than what the standard boat could provide. Thus, instead of the normal configuration of having the engine installed beneath the centre console and connecting it to a stern-mounted jet drive via a jackshaft, Rafnar opted for a slightly more compact arrangement consisting of a Volvo Penta D6 sterndrive diesel engine and a Volvo Penta DPI drive with two counter-rotating propellers.

The DPI drive also comes with full electronic steering and is claimed to offer a roughly 20 per cent improvement in performance compared to the jet drive fitted on the standard Rafnar boats. This also gives the new boats a high degree of manoeuvrability, enabling them to turn on their keels.

In yet another deviation from the standard RIB design, Rafnar had fitted each boat with a foldable rear A-frame that mounts the working lights, navigation and communications aids, and antenna. This would allow the boats to be easily stored within the limited space on board the mothership without having to disassemble the onboard electronics.

To better facilitate their storage on the mothership, the RIBs make use of a custom chock arrangement. This includes a set of heavy duty storage cradles welded to the deck and manually adjustable side mounts that may be lowered and raised to allow the boats to be easily craned in and out from their position on deck.

One other notable feature of the RIBs is their onboard sonar, or more accurately, a wide-angle sonar seafloor profiler (WASSP). This single piece of equipment can provide seafloor and bathymetry data up to a hundred times faster compared to a traditional single-beam echosounder, making it an invaluable tool during expeditions in remote areas and even during less demanding sailings.

Further, the installation of WASSP means the mothership may utilise the RIBs as extensions of its own onboard sonar, allowing the crew to cover a considerably wider area even as the mothership remains stationary. All WASSP data collected by the RIBs are sent back to the mothership in real-time via a wireless link. 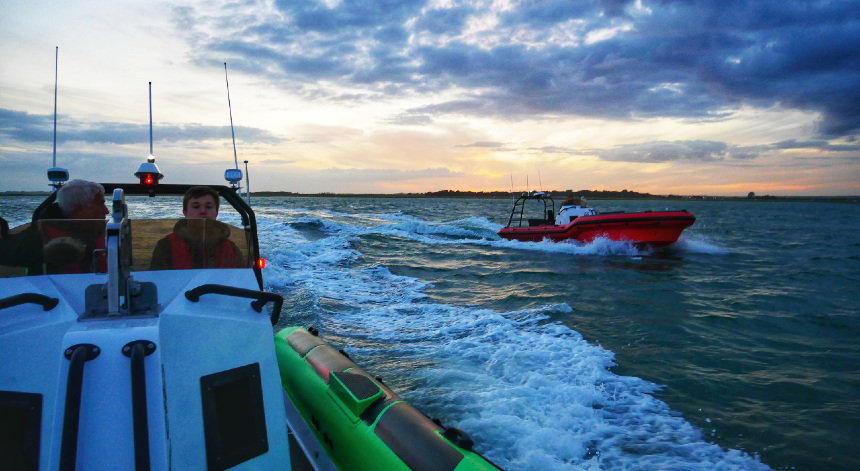 The aft deck features a bathing platform with a folding swim ladder that allows easy access to and from the water.

The seats on each RIB consist of Ullman Dynamics shock-mitigating jockey seats for the pilot and co-pilot, fixed seating for four on either side of the centre console, two removable benches for four in the forward cockpit, and a removable three-person bench located at the transom. Thus, each RIB could accommodate up to 11 people besides the two operators, though the removable seats imply that the vessels will be used for cargo transport and resupply duties about half of the time.

The forward cockpit also houses a freshwater tank that supplies water to an onboard hot and cold shower.

On either side of the console are large deep walkways forward and on the 50-centimetre diameter tube tops are moulded steps for easy boarding. Heavy duty grab rails in powder-coated steel are mounted all around the console to help facilitate boarding.

Lastly, the foredeck area is raised to the high bow tube tops and can be used for additional boarding with the benefit of a removable, custom-made carbon boarding pole. Within the foredeck space is a large storage area divided into three compartments for storage of any items including the anchor. 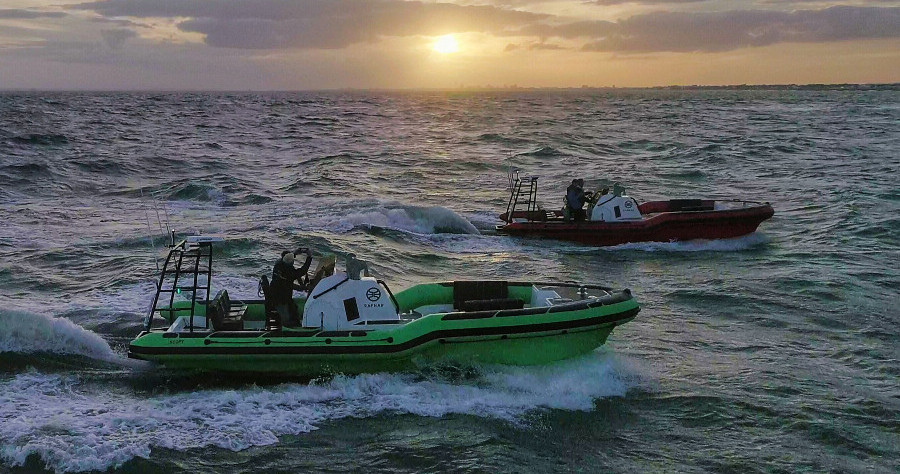