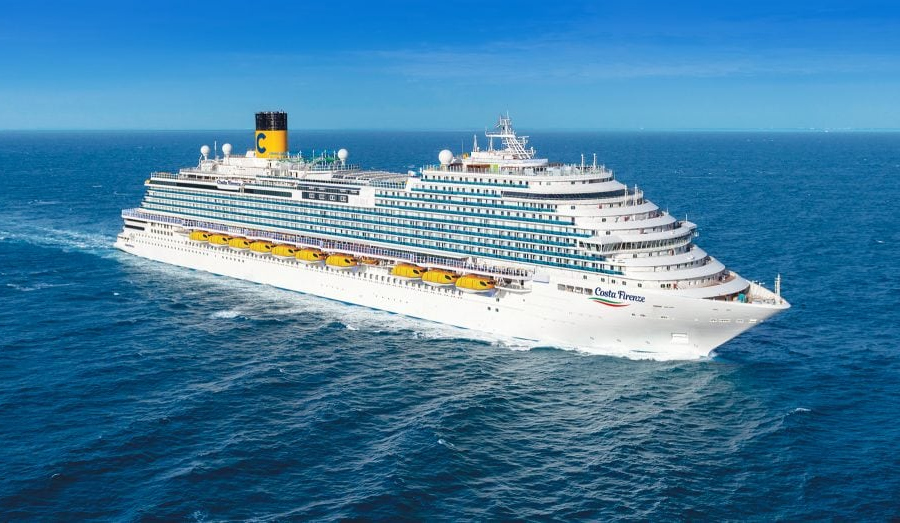 Measuring 323.63 by 37.2 metres and with capacity for 5,200 guests, the vessel named in honour of the famed Italian city of Florence is the second of two Vista-class ships built by Fincantieri for the same operator. The first vessel, Costa Venezia, joined the Costa Cruises fleet in 2019. Both ships were designed and built according to RINA class rules and are slated to serve the Chinese cruise market, providing customers in the Far East with a sampling of what Costa has described as “Italy at sea.”

The 18-deck Costa Firenze has 13 restaurants that serve mainly Italian and Oriental cuisine, seven bars and lounges, a variety of retail establishments that sell Italian-made goods, a coffee shop, a casino, and a theatre. For recreation, guests have access to two swimming pools, a miniature golf course, a selection of sunbathing decks, a gym with spa, a jogging track, an al fresco fitness area, a multi-story water park with slides, and separate activity areas for teenage guests and children aged three to 12, respectively.

A grand atrium that spans three decks is notable for its Italian Renaissance-inspired furnishings that include sculptures, marble columns, and other period-appropriate decor. Other traces of Renaissance influence are found in the onboard art and photo galleries and in some of the fine dining restaurants, particularly those that encompass two decks. Even the corridors and other common spaces on the ship were designed to mimic some of the known urban landmarks within Florence and the rest of Italy’s Tuscany region.

Interior design work on Costa Firenze was provided by YSA Design, the same company that had supplied the “Venice-like” feel on board sister ship Costa Venezia.

The vessel’s accommodation options meanwhile include 20 suites, 14 deluxe cabins, 969 balcony cabins, 287 window cabins, and 846 interior cabins. An additional 701 cabins have been allocated for the 1,450-strong crew. All accommodation spaces are spread out over 11 decks.

The ship is powered by two MAN 14V48 main engines while a trio of MAN 8L48 generator sets supply electricity for all onboard systems. The main engines deliver a maximum speed of 22.6 knots though a service speed of 18 knots will instead be used during operational sailings.

Costa Firenze was delivered to Costa Cruises in late 2020 and has already sailed on itineraries in the western Mediterranean beginning in February 2021. After this October, it will move to Asia to join sister ship Costa Venezia. Future itineraries will also include the Arabian Gulf with sailings that will take place between December 2021 and March 2022.