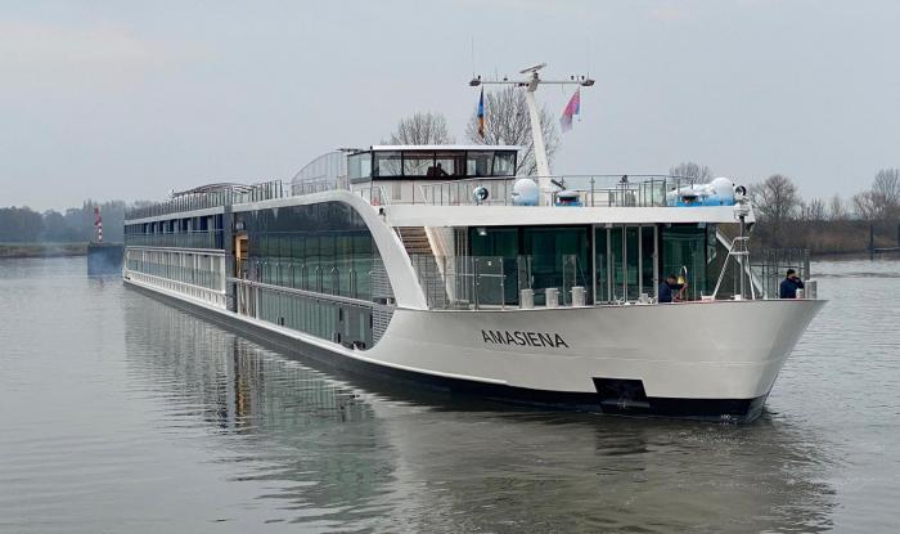 AmaSiena was designed by Dutch naval architects Kamphuisen and built by Vahali Shipyards in Zasavica, Serbia as a development of the Concerto-class, a series of river cruise ships ordered by the same operator and introduced in 2012.

The newbuild has a length of 443 feet (135 metres), a beam of 39 feet (12 metres), a gross tonnage of 3,600, a speed of 11 knots, and 78 all-outside staterooms in nine different categories – including four suites – that can accommodate a total of 156 guests. Some of the staterooms may accommodate up to triple occupancy to house families and other groups of travelers.

Although of varying sizes, the staterooms each boast no less than 155 square feet (14 square metres) of interior space. The majority of staterooms have twin balconies consisting of a French balcony and an outside balcony offering enhanced panoramic views, a favourite feature found on many of AmaWaterways’ newer river cruise ships. All staterooms also have entertainment-on-demand, high-speed wi-fi connectivity, marble bathrooms, and individual climate-controlled air conditioning.

The vessel’s crew complement meanwhile consists of 51 personnel, who are all housed in cabins on the number one deck.

Onboard amenities include a main lounge and bar, a gift shop, two fine dining restaurants, al fresco casual dining restaurants, an enclosed observation area, two sun decks, a heated pool with swim-up bar, a fitness room, and a hair and massage salon. Access between the three lower decks is via lift while dedicated onboard space has been allotted for complimentary bicycles for guests to use on guided tours at the many stops along the vessel’s routes. The upper sun deck also has a walking track.

Kamphuisen said that special attention has been given to ensuring improved comfort for the occupants through effective sound insulation and a host of other improvements, including redesigned air conditioning and air treatment systems. These improvements give AmaSiena a slightly different exterior appearance and outline compared to its earlier sisters, though the interior layout remains generally unchanged from what is found on board its predecessor vessels.

Construction of AmaSiena was completed in the middle of 2020 and delivery took place at the end of that year. The vessel finally entered service with AmaWaterways in August 2021 following its formal naming ceremony, and it has since been sailing under the Swiss flag. Its initial itineraries include sailings on the Rhine, Danube, Main, and Moselle Rivers with stops at Amsterdam, Basel, and Luxembourg, though starting in 2022, it will also sail on itineraries in Belgium.