Written by Baird Maritime on October 13, 2017. Posted in Cruise. 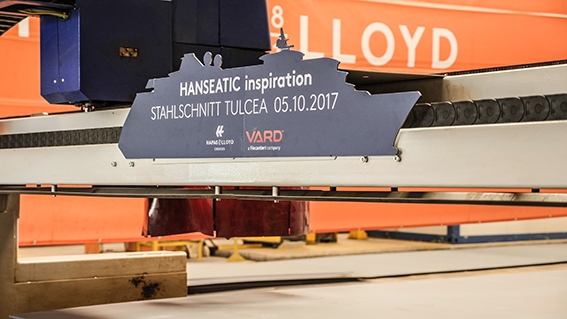 Vard has held a steel-cutting ceremony for Hapag-Lloyd Cruises’ new Hanseatic Inspiration at its yard in Tulcea, Romania.

Hanseatic Inspiration is the second new expedition ship Vard is building for Hapag-Lloyd Cruises and will launch in October 2019. Her sister, Hanseatic Nature will debut in April 2019.

Hanseatic inspiration will be marketed to an English-speaking audience.

The 230-guest ships will also have the highest ice-class rating for passenger ships (Polar Class 6) so they can be used in the polar regions and in warmer destinations, such as the Amazon and the South Seas.

Onboard Zodiacs, some of which will feature eco-friendly electric drive systems, will make it possible to land in expedition areas that do not have ports.

Vard will build the ship’s hull in Tulcea, before it is transported to the Vard Langsten shipyard in Norway for the interior fitout.