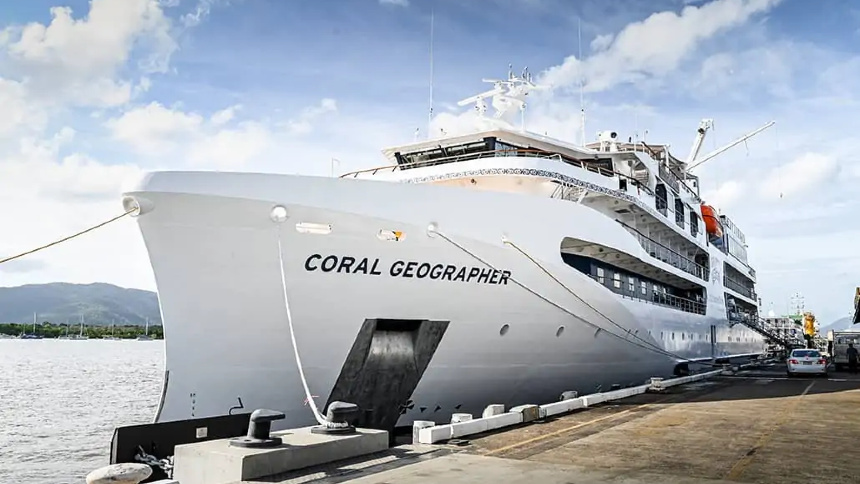 Coral Geographer arrived in Australian waters in mid-March following construction at Vard Vung Tau in Vietnam. It then underwent an extensive fit-out and provisioning in preparation for its voyage out of Cairns and along Australia’s eastern seaboard with a small group of guests on board.

Coral Expeditions said the newbuild vessel, a sister of the company’s earlier ship Coral Adventurer, is designed for tropical expedition cruising and accessing remote wilderness shores that are inaccessible to large cruise vessels in Australia and elsewhere around the world.

The vessel has a maximum capacity of 120 guests but will accommodate fewer than 100 guests as part of Coral Expeditions’ Covid-19 prevention protocol.

Onboard amenities include 60 outside-facing cabins with ensuite bathrooms, multiple indoor and outdoor bars, spacious communal areas, a large dining room that can seat all guests, and a lecture lounge. There is also onboard space for two tenders mounted on hydraulic platforms to allow guests to embark and disembark for shore excursions without steps, queues, or waiting.

Like its sister, Coral Geographer features a shallow draught to enable visits to destinations inaccessible to larger ships.

Following its maiden voyage, the ship will join the Coral Expeditions fleet exploring the Kimberley region. Later in 2021, it will sail on a series of newly released voyages to the Abrolhos and West Coast and the wild islands of South Australia.