New vessels are entering service to support offshore wind activities in European markets. Crewboats once again take centre stage though on-site maintenance support platforms are also being delivered, with one boasting a unique hull design compared to its contemporaries.

A Turkish shipyard has delivered the first purpose-built windfarm service operation vessel (SOV) to be acquired by DEME Group.

The 60-metre, DP2-equipped Groene Wind has a prominent small waterplane area twin hull (SWATH) design, which maximises stability even when sailing at higher speeds in rough seas. The newbuild also has a motion compensated gangway and a daughter craft that will be utilised as a 24-passenger crewboat.

Groene Wind will be chartered by Siemens Gamesa for use at the Rentel and SeaMade wind farms offshore Belgium.

German offshore services company Opus Marine formally welcomed a new aluminium vessel to its fleet of crewboats via a christening ceremony held in late May.

Built by Damen Shipyards Antalya in Turkey, Allegro measures 27 metres long and is capable of transporting 24 technicians at speeds of up to 25 knots under nearly all weather conditions and in wave heights of two metres.

The vessel will be used to provide windfarm support to Opus Marine’s customers.

New crewboat/tender to be deployed aboard Allseas construction vessel

Damen Shipyards Group has handed over a new fast crewboat to Allseas for deployment aboard the installation vessel Pioneering Spirit.

The 16-metre Ricochet features lightweight fendering and waterjet propulsion that allows it to reach speeds of up to 30 knots.

The newbuild will replace two older crewboats in the Allseas fleet. It will operate alongside Nutshell, another Damen-built vessel that is also deployed aboard Pioneering Spirit and is being used for line handling duties.

The vessels are each powered by two Caterpillar C32 engines driving fixed-pitch propellers.

The cabins can each accommodate 24 technicians and three crew.

Nexans has taken delivery of its newest cable-laying vessel, the 149- by 31-metre Nexans Aurora, following its completion at a shipyard in Norway.

The Skipsteknisk-designed newbuild is fitted with a DP3 system and purpose-designed equipment for cable and umbilical transport and laying, including bundle laying, protection and jointing. It will be used in the transport and installation of subsea high-voltage cable systems as well as a variety of other subsea construction tasks.

Nexans Aurora will be homeported in Halden on the eastern side of the Oslofjord. 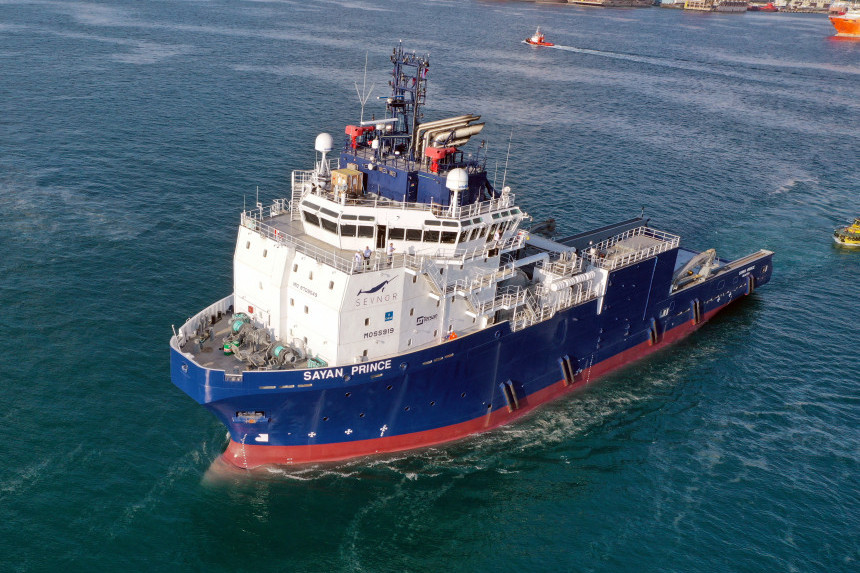 The 84- by 19-metre Sayan Prince will be operated in Russian and Norwegian waters. It has ice class notation and accommodations for up to 95 personnel.