This latest succession of ongoing and recently awarded offshore projects focuses on the subsea segment, with activities such as installation and surveys becoming more and more frequent in western Europe, the Mediterranean, and the Americas.

Danish marine contractor Rohde Nielsen has confirmed that its newest multi-purpose vessel has been awarded its first project.

Grane R will perform boulder removal, trench maintenance dredging, and backfilling for the EU’s Baltic Pipe Project, which will allow the transport of gas from Norway to Danish and Polish markets as well as end users in neighbouring countries.

For the boulder removal operations, the vessel’s crane is equipped with a peel grab supplied with video camera for visual monitoring. It can also install large amounts of rock at depths of up to 60 metres using its adjustable fall pipe system.

The vessel can also perform surveys via its hull-mounted multi-beam system.

TechnipFMC has been awarded an integrated engineering, procurement, construction, and installation (EPCI) contract in Brazil by Karoon Energy for the Patola field development.

The contract covers EPCI of subsea trees, flexible pipes. and umbilicals. The project will take place at water depths of 300 metres and will tie back to the existing Baúna floating production storage and offloading (FPSO) vessel Cidade de Itajaí. 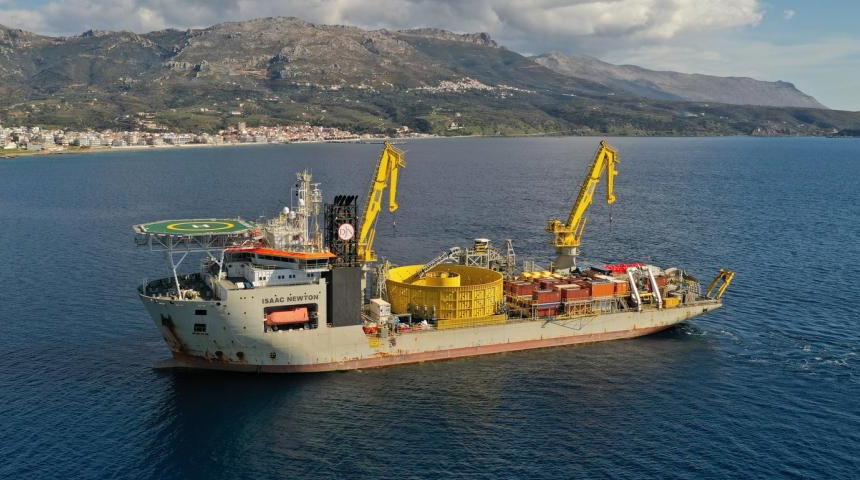 Two subsea cables measuring around 135 kilometres each were installed at a depth of one kilometre to supply the island of Crete with electricity sourced from mainland Greece. The installation took place near the Hellenic Trench fault line, which is characterised by rough seabed and steep cliffs.

Shearwater said the Mid North Sea High’s proximity to shore and existing energy infrastructure makes it an attractive development region for companies both within the oil and gas and the low carbon energy sectors. The acquisition of this large data set prioritises acquisition before wind farm installation and covers areas with potential for carbon storage.

The seismic survey vessel Oceanic Vega is being used to serve the project.

The five-month second phase builds on the initial survey last year. Upon completion in mid-October, the survey area included in the program will have increased six-fold.

MMT has been awarded the 2021 export cable route surveys for the Beacon Wind offshore wind farm.

The project is led by MMT US, the company’s office based in Providence, Rhode Island. Completion is scheduled for mid-July.

The surveys consist of a combination of geophysical, geotechnical, environmental, and benthic surveys along the export route of Beacon Wind sites one and two.

Beacon Wind is being developed by Equinor and BP through their 50/50 strategic partnership in the US.