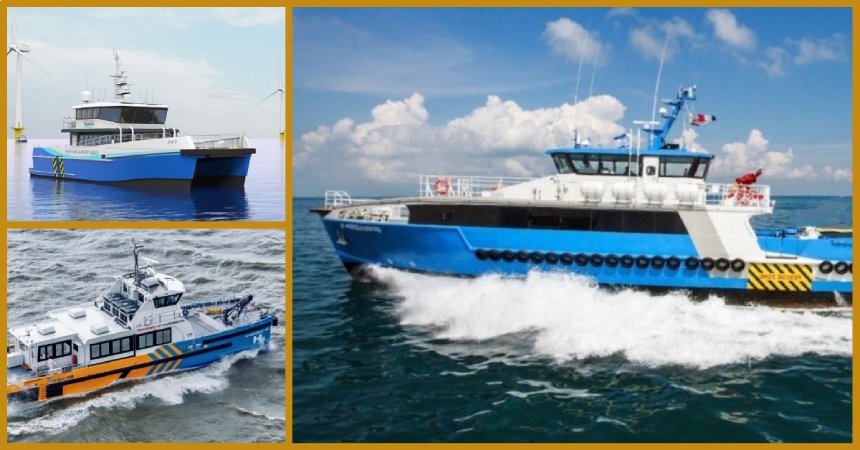 It’s an offshore wind-focused roundup this week. A new crewboat was recently delivered to a Malaysian operator, one is under construction in the United States, additional orders have been placed by a Dutch service provider. A Dutch design firm is meanwhile developing a new anchor handling vessel ideal for use with the large-scale turbines that are set to become operational in the coming decade.

Blue Petra 1 is the first in a series of two 40-metre crewboats to be built by Strategic Marine for the same customer. It will be operated in support of the activities of Petronas and other offshore energy companies in Malaysian waters.

The crewboat has seating for 80 technicians, berths, a galley/mess, and external firefighting equipment. Three Caterpillar C32 engines deliver a speed of 30 knots.

Sister crewboat Blue Petra 2 is scheduled for delivery in 2023.

The crewboat is the first of a new series designed by UK naval architecture firm Chartwell Marine.

The vessel will be certified under US Coast Guard Subchapter L and will have capacity for 24 personnel.

Dutch operator Windcat Workboats has placed an order for six additional hydrogen-powered crewboats for delivery by 2024.

The first of these six new crewboats will be operated in support of the German offshore market by FRS Windcat Offshore Logistics, a joint venture of Windcat Workboats and Germany-based FRS Offshore.

The Damen Shipyards Group has begun development of a new class of anchor handling vessel that will be capable of supporting the operation and maintenance of large-scale, floating offshore wind turbines.

Given the size of the turbines and the depths of the water in which they will be positioned, these FOWTs will require large chains and anchors. Research indicates that each FOWT will require between three and six anchors each, with chain diameters increasing from a typical 152 mm for a large offshore structure to upwards of 220 mm.

Damen said that while the anchoring technologies will remain much the same, the vessels required to handle them will need to be much larger than existing anchor handling vessels.