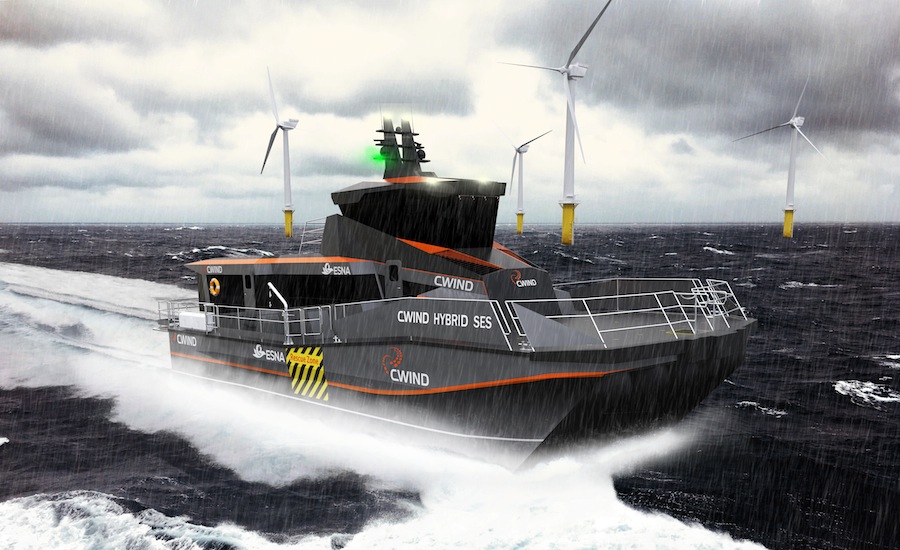 The vessel will have electric and diesel propulsion to reduce CO2 emissions while the surface effect hull form will help ensure faster personnel transfers as well as increased passenger comfort.

The SES is being developed in partnership with Norwegian ship design firm ESNA and UK builder Wight Shipyard.

All three companies were kind enough to speak about the project.

BM: What are the advantages that this particular vessel would offer compared to most other crewboats in use today?

The vessel has catamaran hulls with an air cushion between them, sealed off at front and stern with flexible rubber. This cushion lifts up to 80 per cent of the vessel weight. Less hull resistance enables higher speed and less contact with the waves reduces vessel motions for crew and passengers.

In addition, the air cushion is also used to compensate for wave-induced motions. Because of this, she allows for safe turbine boat landing access in higher wave heights than conventional crew boats of same size.

BM: What would you say were the biggest challenges faced by the designers in developing this vessel? How were such challenges overcome?

ESNA: The objective when designing this vessel was to utilise new electric technology to reduce the carbon footprint. When combining diesel-powered engines with electric machinery and batteries there are many different alternatives and suppliers. And especially finding a solution that could offer the combination of low weight for high speed, flexible operating modes including zero emission, and at the same time be durable, was an exciting challenge.

The final design has come as a result of a lengthy screening of possible equipment and suppliers, and by working closely with these suppliers and the vessel owner CWind to find a match between the operational needs and equipment.

BM: Besides the SES hull form, what are the key features that make this crewboat unique? How would those features enable the vessel to perform its intended role, especially in light of conditions in the North Sea?

CWind: Digitalisation will be built into the hybrid SES so that machine learning begins from the day it sets sail. This means that crew will be able to make operational decisions and judgements based on both data collected over time and their own experience, allowing us to achieve greater efficiencies and savings.

The SES’s combination of electric infrastructure and battery availability will allow for immediate power delivery, coupled with greater fuel efficiency.

The revised superstructure design will improve situational awareness of the vessel.

BM: What would you say were the biggest challenges faced by the designers and builders in developing this vessel? How were such challenges overcome?

Wight Shipyard: The biggest technical challenges involve getting fire approvals for the composite materials specified for use in the superstructure of a high-speed craft.

We are working with material suppliers, class and specialist third party partners to come up with a proposal for testing that minimises weight. This is a work in progress with testing beginning sometime in 2020.

ESNA: The vessel has diesel electric propulsion with a battery package. She has two propulsion engines, no auxiliary engines. All other systems are electric, including all the air cushion systems.

She can run purely on batteries, from the diesel engines only, or can be battery boosted with the combination of the two. This adds four to five knots to the maximum speed. Using the batteries to improve fuel efficiency, we expect that we can save up to 15 per cent fuel oil compared to a diesel only version.

Slow speed port manoeuvring can be made in zero emission battery powered mode.

At a typical day cycle she will be powered from land and charge at nighttime. Transit out will be in boost mode, while she will charge again and store some of the energy used when pushing on to the turbines during passenger transfer. Waiting in the wind farm she will be in zero emission battery mode, before she charges again when collecting passengers and boost back home.

BM: What lessons did the team learn in designing and building this vessel?

Wight Shipyard: We’re excited to have finished the design phase and will collate our experience and learnings from the build to gather knowledge for future builds.

Complex vessels such as this need additional design verification before contractual commitments can be made on weight and performance.

Designers are inclined towards being optimistic when it comes to the weight of their designs and the yard must thoroughly check the detailed assumptions that have been made and modify the weight budget as necessary.

Likewise the systems and electrical engineering all need review and detailed study by the yard as there is no such thing as a plug and play system for marine hybrids of this scale.

BM: Could the same lessons be applied in workboats for other purposes? Could the vessel be scaled up beyond its current 22- by 8.9-metre dimensions to be able to accommodate a greater number of passengers?

Wight Shipyard: Yes it could. In fact, this vessel is itself a scaled-up version of the 12-passenger Sea Puffin.

CWind: There is no physical reason why the vessel couldn’t be scaled beyond its current size. The Skjold-class corvettes are five times the size of the hybrid SES, so a good example of what might be possible if scaled up.

Any limitations around scaling up of the vessel would be regulatory – currently, the vessel is in code with MCA HSC regulations. Scaling up beyond this would require SPS compliance, which is covered by a different regulatory framework.

BM: When will the hybrid SES crewboat be completed and delivered? Will we be seeing more of these vessels in future? If so, where will those vessels be used?

Wight Shipyard: Completion is scheduled for the end of this summer. We are hoping for follow orders for sisterships in the near future. The first vessel will be used around wind farm installations in the North Sea, where its motion damped handling characteristics should allow it to outperform much larger vessels whilst consuming less fuel.

Ultimately, with higher transit speeds, lower fuel consumption and increased comfort for technicians during transit, this vessel represents a win-win situation for everybody.