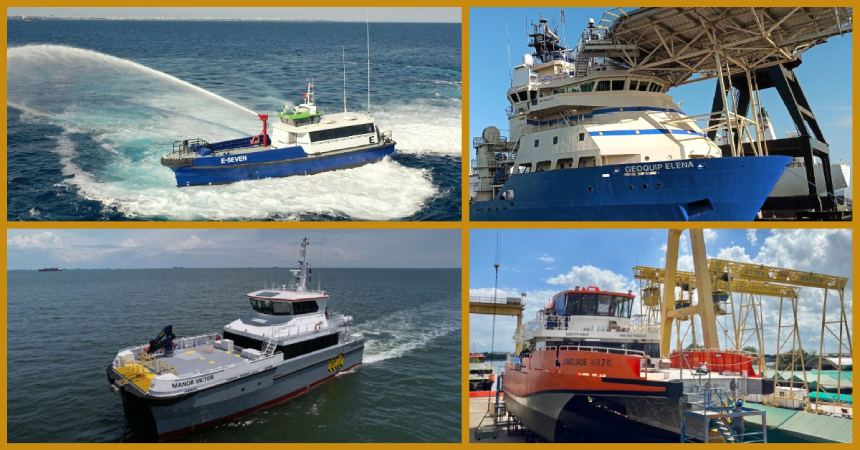 Crewboats once again dominate the latest offshore vessel-related news with completed deliveries to the Netherlands, sea trials in the UK, and ongoing construction in Thailand. Meanwhile, a Switzerland-based survey company adds to its fleet with the acquisition of a refurbished vessel.

E-Six and E-Seven each have a length of 22 metres, a cargo deck with an area of 25 square metres, and space for 42 passengers and two crewmembers. A speed of 32 knots will enable the vessels to sail for up to 315 nautical miles, though the range can be extended to 350 nautical miles with the addition of optional fuel tanks.

Additional optional features specified by EMAR include firefighting capability, secondary gensets for redundancy, and an autopilot and night vision package.

Both vessels were built at Damen Shipyards Antalya in Turkey.

Singapore-based Strategic Marine has confirmed the successful completion of sea trials of two new 27-metre crewboats in a series that were recently delivered to UK operator Manor Renewable Energy (MRE).

Manor Victor and Manor Vulcan were designed in collaboration with BMT. Strategic Marine said that, due to hull form optimisation and propeller efficiency, the newbuilds achieved a 15 per cent increase in bollard push compared to the company’s 26-metre crewboat range.

The newer crewboats also showed a 0.5-knot speed increase with the same fixed-pitch propeller arrangement on the 26-metre vessels. The increased efficiency reduces fuel burn and reduces GHG emissions by five per cent at the same speed.

Marsun Shipyard of Thailand has begun construction on a new crewboat ordered from the company by an undisclosed customer in Taiwan.

Marsun had also built an earlier trimaran crewboat of a similar design. It will also be operated by the same customer in Taiwan.

Switzerland-based offshore geotechnical data acquisition company Geoquip Marine has confirmed the further expansion of its fleet of vessels with the addition of an integrated geotechnical survey vessel (IGSV).

Geoquip Elena is configured as a specialist deep push cone penetration testing (CPT) vessel. It was acquired in anticipation of demand from offshore windfarm developers, especially in Europe and North America.

The vessel was built at Vard Brattvaag in Norway in 2002. It is currently being fitted with one of Geoquip Marine’s 200kN seabed CPT units, which can operate a range of seabed penetration test equipment.